The worst thing that can happen when you begin playing with your Nerf guns is realizing that the blasters you purchased are not as great as you thought they would be. Some blasters live up to their expectations while others make you wish you had made a more educated decision. If you are considering purchasing a Nerf gun blaster, use the buyer’s guide below to help you find the one of your dreams.

​Speed and mobility are yours with the quick draws and fast firing of the Strongarm blaster. Motorized Speed Load Technology automatically loads and fire 6 darts in a row from the quick draw​.

Keep this in mind when you are searching for Nerf blasters. The Nerf N-Strike Elite Hail-Fire Blaster is one of the biggest Nerf blasters to date. It has since been discontinued by Nerf. Its features include the ability to hold 144 elite darts as well as 8 reload clips, the ability to activate semi-automatic firing by quickly pulling an acceleration trigger and speeding up the motor, the ability to rotate to another ammo clip, and the ability to shoot a bullet as far as 75 feet.

However, there are some downsides with this gun. The first downside is that it is rather bulky and it can be difficult to carry around during a Nerf war. The second is that to reach full capacity, you will have to purchase additional bullets and clips as all of them are not included in the set, which can be rather expensive. The last downside is that the gun takes four AA batteries to operate, which may become costly over time.

Still, the Nerf N-Strike Elite Hail-Fire Blaster is a fantastic gun and should not be overlooked.

Size Makes it Difficult to Carry Around

Not All Parts Are Included in Set For those of you who may not want to spend a ton of money on a quality gun but who still want the features of the more expensive guns, you should consider purchasing the Nerf Modulus Tri-Strike.

The Nerf Modulus Tri-Strike is aptly named because it has three launching features.

This gun is able to launch elite darts, mega darts, and missiles using the multiple attachments that are included with the gun. The Nerf Modulus Tri-Strike can fire up to ten elite darts at once, one mega darts at one time, and one missile at one time.

Surprisingly, there are very few problems with this product and it is great for use in any Nerf battle.

However, it has been mentioned that some people have difficulty getting it to work properly because the bullets have been known to jam. While this may be an issue for some, others have no issues working the gun, so it is definitely a great Nerf blaster to own and use. 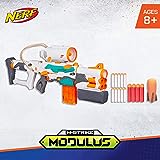 The Nerf Doomlands 2169 Lawbringer Blaster (full review) separates itself from most models produced by Nerf because of its unique hammer-cocking mechanisms, which makes it easier to use than those that require you to pull back a section of the gun to prepare the rounds.

Along with this great feature, this blaster has a 12-round capacity and has a built-in stock that has enough storage to keep another 12 bullets for when you run out of bullets in the rotating barrel. It is also light enough to carry around during Nerf battles and doesn’t require any batteries or complicated equipment to operate.

Aside from the occasional complaint that this blaster lacks accuracy and range, most people are satisfied with the Nerf Doomlands 2169 Lawbring Blaster and the way that it functions. This is a great blaster for those who want a simple gun that still has plenty of firepower. This blaster can hold up to 6 elite darts in its rotating barrel, has a barrel that slides out when you press a button on the side so that you can reload with ease, and can shoot up to 75 feet. It’s also easy to fire and can be emptied pretty quickly.

Since it is budget-friendly, there are some issues that people have experienced while using the gun. The most common one is the same issue that people have with other Nerf blasters that have six-bullet rotating barrels, wherein the gun will occasionally jam. I have experienced this myself and can say that it does happen quite a bit as the gun ages.

However, if you only intend to use it occasionally or if you are new to Nerf, this is the blaster that you should purchase. The Nerf N-Strike Elite HyperFire Blaster is the weapons of choice for those who want a fully automatic blaster.

This blaster has a barrel that can hold up to 25 darts, can fire up to five darts per second when running on fresh batteries, and can shoot bullets up to 90 feet. All of the bullets come included with the gun; the only thing that is left out is the four D batteries that are needed to run the gun.

Besides the fact that this blaster needs rather expensive batteries to operate and is a little on the heavier side, this is a good gun for the price and it will allow you to shoot quickly and effectively during a Nerf gun battle.

Out of the five guns that we discuss here, the one that we highly recommend you purchase is the Nerf Doomlands 2169 Lawbringer Blaster because it is affordable, easy to use, and great in battle, which is the trifecta for those who are both new to Nerf or are experienced Nerf blaster users.

However, know that each gun will work differently for each individual and you may need to experiment before you find the gun that is the best fit for you.

Before you purchase any Nerf blaster, here are some things that you should take into consideration.

Some Nerf guns are built to last while others are practically begging to be broken. When you first look into purchasing a Nerf gun, ask yourself a couple of questions. Are you going to be properly storing your Nerf blaster in a safe place? Is your Nerf blaster going to experience heavy use or light use? Will you be playing mostly indoors or outdoors? Is it going to be moved around or dropped a lot?

If you expect that you’re going to be using your Nerf gun frequently and that there is a likelihood it will experience an accident or two along the way, seek out a Nerf blaster that has very few attachments or pieces that could break off during a battle. These are the Nerf guns that will stick around for awhile and save you money in the long run.

The amount of bullets that your gun can hold at once is very important. It can be frustrating to use guns that require you to reload every few seconds because they only have a one-bullet capacity, especially if the reloading process takes more time than it does to unload your weapon. I recommend looking for a gun that has a capacity of at least 6 bullets or more to save you time when you begin using it.

Nerf guns can cost anywhere from a couple of dollars to almost 100 dollars. While the ones on the more expensive end of the spectrum can be quite impressive, you have to decide whether or they would be a good investment. If you plan on using a Nerf blaster a lot for serious games, then you should probably invest your money in a high-quality gun that meets your needs.

If, on the other hand, you will only use your Nerf blaster a couple of times in spontaneous games, you should aim to purchase a Nerf gun that is more affordable and can be left alone for a while without you feeling bad about not putting it to use.

Nerf has released several powerful models over the past couple of years that have improved the firing range. These can be great guns to have in the right setting, but they aren’t always going to be necessary to have on hand.

Do you and your friends have many of your Nerf games outdoors? Is there plenty of space for you and your friends to move around and shoot each other? If so, you should purchase a powerful, long-range Nerf blaster so that way you can hit your targets in these kinds of environments.

If you typically play your Nerf games in smaller spaces, a Nerf blaster that shoots bullets a couple of feet will be the only gun that you need.

If you are serious about Nerf, you know that there is an infinite amount of accessories and extra equipment out there that you can add to your Nerf blaster, and you probably already have a nice collection of them. For those of you who are new to Nerf, these types of accessories include sights, special bullets, and tripod stands that will help you to keep your larger guns steady during battle.

Make sure that you research these kinds of accessories and determine whether or not they will work with the blaster that you want to purchase before you buy it. You don’t want to be searching for accessories later only to find out that your Nerf gun isn’t compatible with most of them.

Larger Nerf guns typically require batteries to enable the gun to shoot better and hold more ammunition. People who are not looking forward to changing batteries frequently should not purchase Nerf blasters, as they are known to drain batteries quickly and often need many to power the gun.

Instead, look for guns that only use springs and other mechanisms to launch the bullet out of the chamber. If you don’t mind changing batteries, however, you can choose from the entire selection of blasters that Nerf offers.

Most Nerf blasters use the foam bullets that one thinks of when they think about Nerf products. However, there are other types of ammunition that Nerf products use such as missiles, balls, mega darts.