Welcome to the Top 5 Best Nerf Guns for 8-Year-Olds!

There are a lot of Nerf blasters on the market today, and it can be hard to pick the right one when you’re shopping for a kid. What are you supposed to look for in a blaster? Is there such a thing as a blaster that’s too powerful or too complicated for a younger player? Are there some that are better than others?

We’ve done all the homework for you and checked out which blasters are a good fit for young kids, as well as running down a list of the main things to look for when picking a blaster for a young child. Because, at the end of the day, no one wants to spend their Nerf time comparison shopping; they just want to get down to the fun!

​Don't be fooled by this blaster's compact design. With its micro size, the Jolt is a great blaster to take almost anywhere and be ready to battle at a moment’s notice!

How Easy Should a Nerf Gun be to use for my Young Ones?

When picking out a Nerf gun for an 8-year old, you don’t want them to have to worry about things like guns with multiple triggers, guns that take an obscene amount of batteries, or any of that other craziness. You just want them to go out and have fun!

With that in mind, you might want to avoid battery-powered blasters altogether. Another thing that might make the game a little difficult is a clip-fed blaster. While clips, magazines, and drums allow for much faster firing rates, they can become downright annoying to try and reload in the heat of battle. Single-shot blasters, on the other hand, are simple and straightforward to reload and fire.

Finally, it’s always a good idea to make sure that if you’re going for a plunger-primed blaster (like most of the ones on this list) it doesn’t take too much strength to pull. You don’t want your kids to struggle with their Nerf gun every time they want to take a shot, and you certainly don’t want to have to do it for them every time either!

How Powerful is too Powerful?

Another thing to think about when picking out a blaster for young Nerfers is how fast and strong the darts are going to be coming out of the gun. While you don’t want to get a kid a complete dud that can fire a dart only a couple of feet, blasters like the Nerf Rival Nemesis can fire darts at speeds of up to 100 FPS! That might just be a little too much power for a small child to handle (and that’s without even thinking about how heavy a blaster like that can be (the Nemesis weighs around 6 lbs with batteries).

We’re a little torn on what the best ammo is for young Nerf warriors. On the one hand, Nerf Mega darts are extra big and thus much harder to lose, which is something most parents like to hear (those refills can get expensive). In addition, they whistle, which adds a good amount of fun to the game.

On the other hand, there’s the Nerf Elite Style of dart, which is much more commonly found among blasters, making it easier to share ammo between blasters (and siblings!). Also, any blaster that can use Nerf Elite darts can use Nerf Glowstrike darts, which add a whole new level of fun to Nerf wars because they can be used in low light and night games.

At the end of the day, the type of ammo you want comes down to preference and should take a back seat to whether or not the kid likes the blaster that’s going to be doing the firing.

Now that we’ve gone over some of the key points in picking out a Nerf gun for an 8-year old, let’s get to the Top Five! The Mega BigShock is a whole lot of power packed into a tiny package. The plunger-style primer requires a surprisingly small amount of force, and since the BigShock uses the extra-large Mega darts, it’s much harder to lose sight of ammo under or behind furniture.

While we’re on the topic of darts, did we mention that the BigShock’s darts whistle while they fly? It’s a definite plus in the intimidation department (try keeping your composure while you’ve got ammunition screaming past you), and the cheery sound is sure to delight small Nerf warriors. 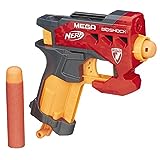 Another amazing addition to the Elite line of Blasters, the BowStrike is the perfect combination of old-school cool, high-tech ultra accurate action, and stealthy hide-away design. Hands down, the BowStrike blaster is one of the easiest to conceal, making it perfect for desk drawers and covert attacks. And, when the bow arms pop open and the sight pops up, everyone around knows that you mean business!

What we like most about this blaster is how easy it is to use right out of the box. No need to read instructions or try to figure out overly-complicated firing mechanisms; just load, prime and fire. It’s something that nearly any age group can figure out in a matter of seconds and it certainly shouldn’t pose a problem for an 8-year-old. The Magnus is another blaster on the list that makes use of the super cool Nerf Mega whistling darts. This is a big, mean, pistol-type blaster that leaves no confusion about what exactly your goal is on the Nerf battlefield, and it’s easy enough to use that anyone can take advantage of its power.

Make no mistake: this is an uncomfortable blaster to be staring down. The barrel diameter is roughly double that of the standard Elite blaster and can look like a regular black hole when you’ve got an opponent pointing it your way.

The way the ammo literally screams through the air as it races toward a target is another point in its favor, seeing as it causes other Nerf warriors to focus in on the dart itself and not the one firing it. Unfortunately, not everything is sunny in Magnus Land as there are a few design flaws that hold this blaster back from being as amazing as it wants to be. Being an adult is pretty awesome (bills aside). You’ve got money to buy things for yourself, you set your own bed time, and no one forces you to eat brussels sprouts. Still, awesome stuff like the Star Lord Battle Gear Set make us wish that we were child-sized again.

With this set you get to become Star Lord, with a replica of his mask and blaster that will make you the terror of galactic foes everywhere. And, speaking of the blaster, even though it’s tiny, just like the Real Star Lord’s blaster this one packs a punch (it’s able to fire up to 40 feet)! That’s thanks to the Nerf Elite darts it comes equipped to fire. 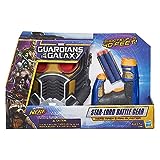 When it comes to small, easy-to-operate Nerf guns, there’s nothing quite like the Elite Jolt. This small one-shot pistol has surprising range and accuracy for a mini blaster, and it has become the sidearm of choice for many seasoned Nerf veterans.

What really stands out about the Jolt is just how many Nerf warriors trust it as their last line of defense, even though there are plenty of other blasters that boast either more ammo capacity or a better firing rate. Whoever said that big things can come in small packages was almost certainly talking about the Elite Jolt.

With all the heavy hitters on this list, it’s tough to decide on just one as the best blaster for an 8-year-old. By a hair’s breadth, we chose the Nerf N-Strike Elite Jolt as the number one blaster for younger users, although the Mega BigShock came in a very close second.

What really decided things for us was the superior range and accuracy that the Jolt has, as well as its use of the Nerf Elite ammo style, which makes it compatible with darts from a wide range of other blasters. You can even use GlowStrike darts with the Jolt for nighttime fun!

While it may not be as amazing a blaster as the Jolt or the Mega BigShock, the Star Lord Battle Gear set deserves another mention because it’s just. So. COOL! There really isn’t another blaster on this list that gets us or our imaginations as fired up as this one (and yes, it has a lot to do with the mask that it comes with).

Thank you for checking out our list of the Top 5 Best Nerf Guns for 8-Year-Olds! We hope that you’ll be able to find the perfect blaster for your mini Nerf warriors, and as always, keep blasting!