Picture this: you’re out in the neighborhood (or in the office!) fighting for your team in one of the toughest Nerf battles you’ve ever seen and suddenly your main Nerf gun runs out of darts. There are baddies everywhere and the situation is starting to look bleak. As the enemy closes in on your position, what are you to do?

Hopefully after you’ve read this buying guide you’ll know what small Nerf sidearm to have ready so you can keep fighting and lead your team to victory!

The compact, one-handed design of this blaster lets you load fast with one hand and fire with the other.

Small, portable Nerf guns have been a staple of the dart-blasting company for quite a while now. In fact, the very first Nerf missile blaster, the Sharpshooter, was a smaller-sized Nerf gun.

While Nerf guns have come a long way since 1992, the ability to hide away a small Nerf gun for surprise attacks or some quick retribution is still in high demand.

So what would be the ideal small Nerf gun for you? We’ve got all the facts on exactly what you should look for when picking out a small Nerf blaster, as well as our picks for the Top Five Best Small Nerf Guns!

Even though this article is covering only small Nerf Blasters, there is still a huge amount of variety to be aware of.

From different types of ammo to awesome additional features like laser sights and zombie-slicing saw blades, picking the right blaster for the job can be tough. Luckily for you, we’ve done all the homework!

Add in a blaster body that looks like an old-school Derringer, an awesome hammer-style priming mechanism, and a Walking Dead-esque “custom” handle grip, and you have what amounts to one seriously slick blaster.

This is our pick as the friendliest blaster for the tiniest of Nerf warriors. 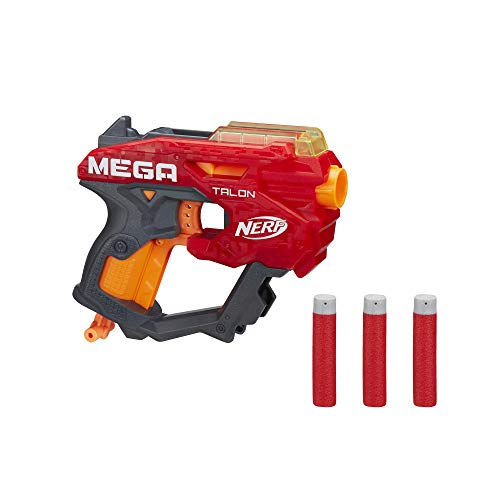 The plunger-style primer requires a surprisingly small amount of force to use and since the BigShock uses the extra-large Mega darts, it’s much harder to lose sight of ammo under or behind furniture.

We’ve already gone over how cool the Zombie Strike line of blasters look, but even in such killer company, the CrossCut finds a way to stand out!

Seriously, if there were a zombie apocalypse anytime soon, we would want to have a CrossCut (or two!) for handling business.

The FireStrike is a weirdly named blaster. It has nothing to do with fire, but what it does do is absolutely amazing. Under the barrel of this uncannily accurate and ultra long range (up to 75 ft!) blaster is a laser sight.

Anyone who has ever played Call of Duty, Battlefield, Counter Strike, or [pick your favorite FPS] can tell you just how useful such a feature can be. Not to mention the fear factor involved in suddenly seeing a red dot blossoming on your teammates forehead seconds before they’re taken down!

This gun is another amazing addition to the Elite line of Blasters! The BowStrike is the perfect combination of old-school cool style, high tech ultra accurate action, and stealthy hide-away design. Hands down, the BowStrike blaster is the easiest to conceal, making it perfect for desk drawers and covert attacks. And, when the bow arms pop open and the sight pops up, everyone around knows that you mean business!

While it’s hard to pick a favorite from this envy inspiring lineup of blasters, the Nerf N-Strike Elite FireStrike Blaster wins out as our favorite small Nerf gun. At around $10, there’s just no arguing with this blaster’s bang for its buck (pun definitely intended).

We’ll admit it: we’re still a little bugged by the need for AAA batteries, but the ultra-long range and laser sight (!!!) more than make up for the inconvenience, not to mention how easy it is to share darts between it and our other blasters.

Besides, we have to put that mondo pack of batteries we bought to use sometime, amirite?

While not quite the war-winning masterpiece it needs to be to be our top pick, the Nerf Zombie Strike DoubleStrike Blaster definitely deserves a shout-out for it’s awesome design and rapid-fire action. If we had to pick the Nerf gun that we would most want to be seen with, this would definitely be it.

With the exception of one of the blasters on this list (we’ll tell you more about that one later!) all of our top picks are small enough to fit in a back pocket or tucked into a belt. And c’mon, who doesn’t want to pull a John McClane and surprise the bad guy with a blaster from behind the back at the last minute?

When picking out a Nerf sidearm, it’s important to think about ammo compatibility. After all, nothing is worse than realizing that you’re out of bang in the middle of a firefight.

For our list we’ve chosen a number of different blasters that take different ammo styles so that no matter which blasters you choose for your main arsenal, you’ll be able to find a small blaster that will fire the same type of darts.

The Tactical Rail can be used to add all kinds of different modifiers to your Nerf guns, ensuring that you won’t ever be in the awkward position of having the same setup as your opponents in a Nerf war.

Nerf Blasters that are Easy for Children to Use

Not all Nerf guns are created equal. Some will be much easier to use for younger Nerf warriors than others, and in our reviews of the Top Five Best Small Nerf Guns (just scroll down!) we point out which ones work and which ones don’t for tiny hands.

Another thing to think about when buying a Nerf blaster for a tiny fighter is whether or not that model needs batteries or might be unnecessarily complicated for the lil’ dude or lil’ gal to handle. Nobody is going to like having to take a time-out to ask Mom or Dad for help, and ditto to making a battery run to the local pharmacy or market in the middle of a war!

As mentioned above, some Nerf guns are able to add on different modifiers. Others have incredible built-in features like hand-to-hand abilities for when things get personal and laser sights for the professional looking to make a clean hit. It’s important to choose a

Nerf blaster based on the type of battle you think you’re going to fight next––and don’t be afraid to stock up on a few different types so that you can set up a loadout for whatever type of fight might be coming your way!

Whichever blaster you end up picking from this list, you’re not going to go wrong.

These are all top-of-the-line models available right now, so just remember to choose based on who’s blasting and where, and what role you want to play in taking your enemies down.

Do you want to pick off valuable targets from afar?

Or is up close and personal more your style? Regardless of your choice, just remember: darts are life!