Referred to as ‘one of the best Nerf sniper rifles on the market today’ the Nerf Centurion Mega Toy Blaster is often raved about, and with good reason too. Named after the position of a commanding officer in the ancient Roman army, the blaster has been known to pack a real punch.

Overview of the Nerf Centurion

Released in 2013, the Nerf Centurion Mega Toy Blaster possesses two tactical rails – one at its stock end and one right under its muzzle, where a folding bipod is usually equipped. It comes with an integrated shoulder stock and has a priming indicator down its rail.

There are three sling points on the barrel and two at its rear end. Its large priming slot at the side of the blaster is an indication of its long priming travel. The Nerf Centurion also features a two-feet plunger tube.

With a priming mechanism slightly different from other clip-system blasters, the Nerf Centurion’s bolt remains in the rear when the blaster is in idle, thereby allowing for easy removal of its clip.

The bolt comes forward once the blaster is primed, and is sent snapping backward to the rear when the chambered dart is fired off, creating a recoil effect.

At 1.03m in length, the Nerf Centurion has a maximum firing rate of 1-2 darts per second, with a firing range of 100 feet. It has a six-dart clip stock capacity and utilizes mega darts instead of the older variants of elite darts.

The renown of the Nerf Centurion

The Nerf Centurion Mega Toy Blaster has been recognized by Business Insider as the best Nerf gun for distance.

It was designed to shoot up to 100 feet but has been adapted in certain countries due to safety concerns, which by itself speaks for the blaster’s prowess.

Its usage of the Nerf Mega Whistler darts also adds for further adrenaline. There is something about hearing your shots scream through the air that enriches the experience of firing the Nerf Centurion.

Other areas where it outperforms

But it is not only with regards to distance that the Nerf Centurion performs exceptionally well. The draw of the blaster has been reported by Nerfers to be light and smooth, making it very easy to prime, especially for such a large blaster.

It has also been found to be extremely comfortable and ergonomic, with a thumb port and stock that makes the blaster feel like a mere extension of the user.

Unlike springers, the bolt resides at the back of the blaster when it is not primed. This allows for the loading of magazines into the well that is not contingent on priming, which makes for much convenience.

Also, the design of the Nerf Centurion screams of fun, with its large and intimidating build.

Many Nerfers modify their Centurions design through painting over its original colors, resulting in a blaster that looks fit for a full-on Nerf war. 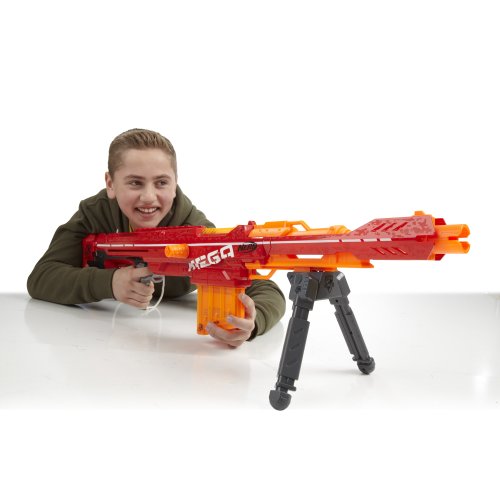 Does it live up to its hype?

This one is a bit of a mixed bag, with as many reviews attesting to its greatness as those discrediting its claim to superiority.

It is certain that the Nerf Centurion does indeed have the capability to fire over a large distance. However, the problem comes in its reliability to do so.

Due to its utilization of a reverse plunger, the shots fired have very little consistency in the distance that they travel and tend also to veer off in different directions, which makes gauging its efficiency in the total distance more difficult to measure.

In short, the distance that the Nerf Centurion is renowned for does exist in capacity but can be a hit-or-miss due to its inconsistency. Most Nerfers attribute this to the darts rather than the blaster, but it is negligible consideration seeing that no other darts can be used.

As for the experience of firing a Nerf Centurion, most reviews reflect satisfaction despite the blaster’s inconsistency in distance. The recoil effect as well as its size make the Nerf Centurion one that is fun to handle and shoot.

The flaws of the Nerf Centurion

As for its flaws, the most commonly reported one would be that of its tendency to jam. Upon examination, this appears to be not so much of an issue with its mechanism per se, but one to do with its durability, or more specifically, its lack thereof.

Most reviews are written after the user first tries the Centurion lack an issue with the blaster getting jammed. However, many of the reviews that are only written after a significant time of having used the blaster report otherwise.

There are also claims that the blaster starts to jam more and more frequently after having dropped it or getting it banged around during one of their Nerf skirmishes.

But whether it is pre-existent or a result of wear-and-tear matters not.

Blasters are rarely kept in pristine conditions either way and thus the problem of it getting jammed is one that seems bound to surface. And based on reports, it is likely to happen sooner rather than later. 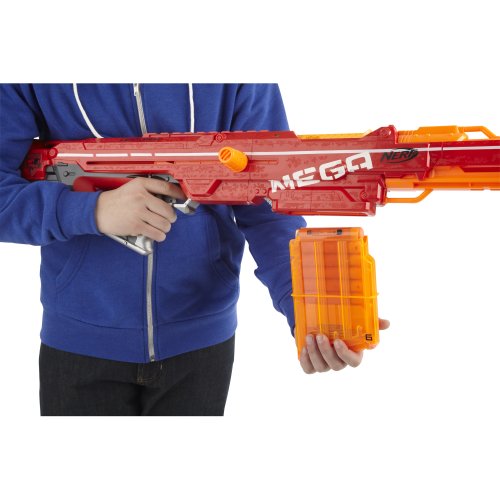 Its large size is also a con that is reported by many, though many others like the fact that it is large. It has been reported to be hard to handle and poor for mobility. This can be chalked up to preference and is not so much a flaw than a consideration one must take into account.

Another common complaint is that the bipod is often way too loose. It comes off easily and makes the repositioning of its legs to be somewhat of an impossible feat. The Nerf Centurion is also highly inaccurate.

And for those that prefer to heavily modify their blasters, the Nerf Centurion may come to disappoint. ​

Before we reveal our verdict, you might want to check out this video here of a range test conducted for the Nerf Centurion Mega Toy Blaster. It shows how the blaster fires and distributes the results of a firing session into low, mid, and high distances for the blaster.

It also tests the Nerf Centurion firing range both with and without a barrel, and can act as a visual guide to what to expect when firing a Nerf Centurion.

And without further ado, our verdict on the Nerf Centurion Mega Toy Blaster.

In terms of performance, the Nerf Centurion does seem to fall short of living up to its advertising. Distance is there, but the effective distance is lacking due to its inconsistency.

Its lack of accuracy is also not something to be overlooked, especially since the nature of its size and mechanics is meant for long-distance shooting where the Nerfer using it would take on the role of a sniper of sorts.

And when inaccuracy is paired with its capacity for only six darts, the Nerf Centurion Mega Toy Blaster is not one that particularly shines or stands out in terms of fulfilling what it was designed to in terms of performance. 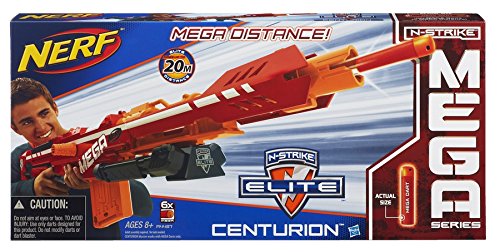 However, with all that being said, it is impossible to ignore all the reviews of how tremendously fun this blaster is.

In spite of all its flaws and shortcomings in performance, the overall experience of owning and firing a Nerf Centurion is still deemed to be one of peculiar value. Its attention-grabbing design chambering mechanism does not fail to impress.

Most reviews admit to the blaster's inaccuracy but provides a testament to the joy of shooting the blaster despite it.

In short, the Nerf Centurion Mega Toy Blaster should be avoided if it is a high performance that you seek. But if it is fun and the experience of using a large sniper-like blaster in a Nerf War that you are after, then the Nerf Centurion seems to be a must-have to your collection.