Adventure... Everyone is a big fan of it. Wherever there's a reason to be happy, excited, or active, adventure is always present as the core source of energy.

Nothing comes close to your satisfaction when you have a quality and durable product.

If you're in search of power toy guns with a good reputation and testimonies from many users, Nerf N-Strike Elite Mega CycloneShock Blaster is the right treat for you. 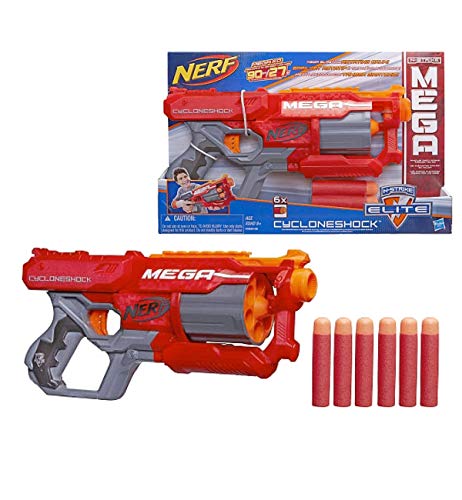 This Nerf N-Strike Elite Mega CycloneShock Blaster is engineered with MEGA blasters that shoot darts at a long-range. In fact, we tested and found that the Cycloneshock actually shoots 80-90 feet.

If you got Nerf Mega CycloneShock blaster in your hands, the battle is already half-won.

The other half in hitting a complete win is left to how you take your aims in unleashing Mega darts from the rotating drum! Big warriors use big blasters. 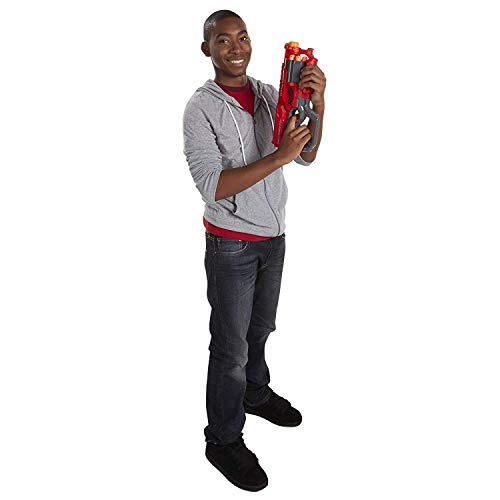 Blast every obstacle standing in your way with this power toy gun!

1. Shoot Mega darts that scream through the air

Ever heard of winning battles by surprise? There's nothing more intriguing than throwing your opponents in a complete state of bewilderment.

If it's a mega battle, don't be scared. Remember you have a strong ally right in your hands. Fire your mega darts!

Let your opponents know they aren't dealing with some low-grade amateur. With Nerf Mega cycloneshock blaster in your hands, you're a dangerous pro!

Something formidable about this toy gun is the screaming sound it emits when you fire its mega-sized darts. 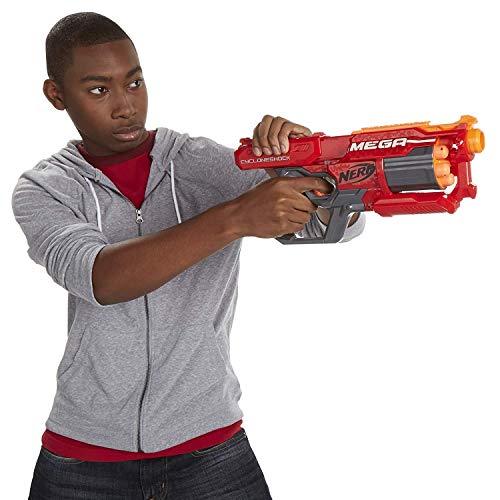 Designed with foamy Nerf Whistler darts, the screaming sound given off will fly through the air and reach the ears of your opponents. It'll take them by surprise and even cause disorientation.

Nerf Mega cycloneshock blaster is a game-changer. If used well, you'll emerge as the Knight in shining armor when the battle ends.

Every nook and cranny of the power gun part is designed to ensure your victory in any battle or competition. The screaming sound feature is just the tip of an iceberg. 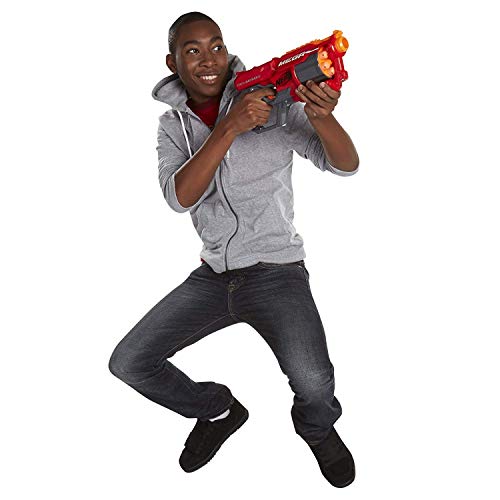 Show your opponents who the winner really is with this high-performance, Mega-sized blasting Nerf Mega CycloneShock blaster.

It's only a matter of seconds before your opponent blow your cover if your gun needs reloading at every shot of one or two darts.

But imagine firing streams of darts in a row without reloading, wouldn't that make you invincible and untouchable?

Nerf Mega cycloneshock blaster is a "dream come true" toy gun. But you needn't stay long in the realm of imagining how powerful you can be in battle.

With Nerf cycloneshock, you'd be having firsthand experience of what it feels like to be invisible in battle!

How will Nerf Mega cycloneshick blaster give you such an upper hand? All the thanks and credits go to the rotating drum design of this power toy gun.

The rotating six-dart drum design enables you to fire six darts in a row without reloading! Yeah. Six darts! 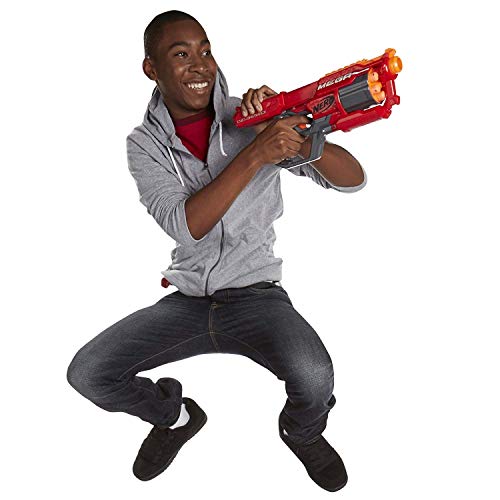 With targeted aims and strategized attacks, six rounds could be all you need to have a sweeping victory. And of course, you don't need to be bothered about reloading.

The rotating six-dart drum design has that under control. All you need is ensuring every shot is worth firing.

Brace up for battle by loading the drum with six Mega Whistler Darts, have the slide pulled back and released. Ready to shoot? Take aim. Lock the target.

Take some breath. Now pull the trigger! The next second will be rented with screams of your mega darts slicing through the air!

The blaster's drum rotates each time one dart is fired. This gives you the incredible chance of dropping six rounds of mega-sized darts in the heat of battle without much sweat and reloading.

Sometimes warriors like displaying some hidden cards for the purpose of shocking their opponents. Why not add elements of shock and awe to your fighting strategy? 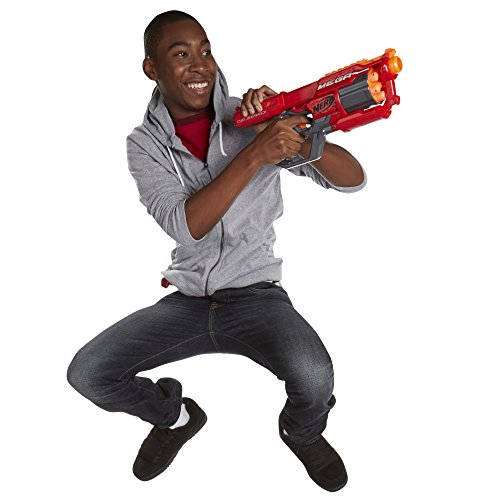 That's called psychological warfare! The battle goes beyond tough muscles and bones. It involves the mind too.

You can stun your opponents by firing darts up to 90-feet with the Nerf N-Strike Elite Mega CycloneShock blaster!

This high-performance toy gun is specially designed for bigger battles and execution of mega-sized tasks. Take charge with the Mega CycloneShock blaster!

Overall, the Nerf Modulus ECS-10 is a very well-built blaster that is also great to look at. Now that we’ve covered the body and design of this blaster, let’s take a look at some of its features.

Make groundbreaking records for yourself with Nerf N-Strike Elite Mega CycloneShock Blaster. With this power toy gun, you got everything covered!

In battle, speed is of the essence. There's no room for laxity or sheer hesitation. As a Nerf warrior, you should know these basic battle drills.

Just as you endeavor in improving on your speed, you should have a complimentary weapon that'll not slow things down for you.

When speed and mobility are the cruces of a Nerf battle, the best toy gun to gear up with is Nerf N Strike Elite Strongarm Toy Blaster.

Take this blaster to any Nerf battlefield and you'd be a Ninja warrior shooting here and there stealthily and speedily.

Designed with 6 darts that can be fired in a row, you can fire at a very fast speed with this toy gun. Targets are often difficult to get with many toy guns. 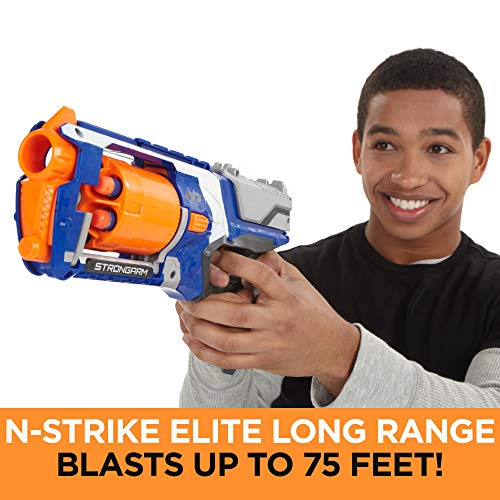 But not with  Nerf N Strike Elite Strongarm Toy Blaster. Just like every other Nerf toy, a strongarm toy blaster is very good for getting precise targets.

Also, the barrel side opens easily for convenience in loading, with 6-darts holding capacity that enables you to fire 6 darts before it's time to reload.

The toy gun is designed with slam-fire action that allows you to fire darts rapidly in wild waves of foam. 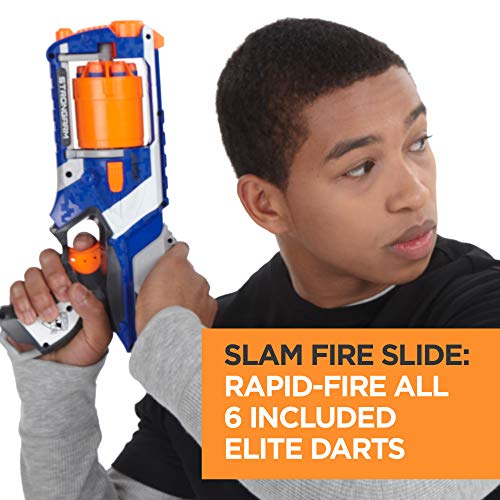 Brace up and take charge of the battle with Nerf N Strike Elite Strongarm Toy Blaster! You're an elite warrior. Fight like one with this Nerf power toy gun!

Your battle is about to be upgraded many steps higher in fun and adventure. Spot opponents, lock your targets, and launch mega-sized darts in the battle air!

Nerf toy gun products are the best shots for having an enjoyable time. Get them for your kids and see them "nerf" about in fun!