While performance is the most important aspect of a Nerf gun, the style of a Nerf gun is definitely one of the points of considerations that we take into account when we are shopping around for a new blaster.

After all, style further enhances a blaster’s performance, making it exciting to fire at enemies on the battlefield no matter how many times we may choose to take it out and use it.

Among some of the most stylish blasters are those that are featured in themed product lines such as the Nerf Doomlands 2169 series.

Even some of the most basic of blasters, like the Vagabond, has been enhanced in such a way that it stands out when compared to similar products that have the same features.

Is the Nerf Doomlands 2169 Vagabond blaster on your list? Take a look at the comprehensive guide below to learn more about what you can expect to receive from this post-apocalyptic weapon! 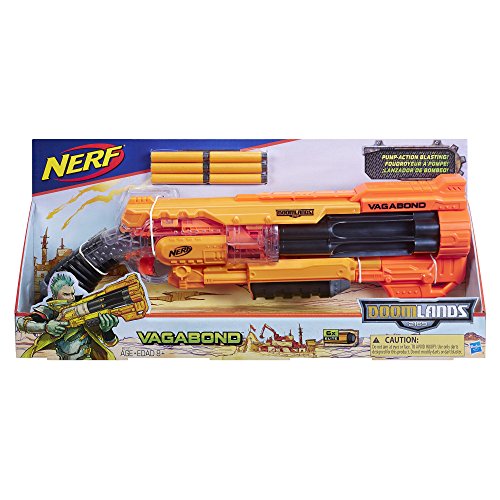 Have you ever used the Nerf N-Strike Elite Strongarm blaster? If so, the best way to describe this blaster is to say that it is the Strongarm with a much cooler design and a longer body.

Of course, you also receive the special transparent portion of the body at the back of the blaster that shows off the firing mechanism as the gun operates.

Although this weapon would fall into the category of a handgun, its distinct style choices make this an attractive option to bring into any battle. 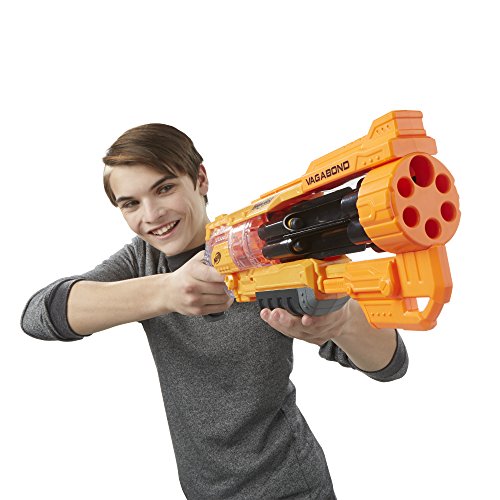 With the Nerf Doomlands 2169 Vagabond blaster, you can load six Nerf darts into the rotating barrel of this weapon.

This may not be considered to be enough ammo for a typical Nerf gun, but it is plenty for the Vagabond considering that it is essentially a handgun with an extended barrel.

If you need a handgun that steers clear of the usual formula and stands out, the Vagabond will definitely frighten the enemy far more than a traditional sidearm would.

Another truly unique feature on the Vagabond is its firing style. Rather than going with the priming mechanism at the top of the gun that users have to pull back in order to use the weapon, the Nerf Doomlands 2169 Vagabond blaster comes with a pump-action style mechanism to get the job done.

This does not necessarily create a massive change in the overall firing or efficiency, but it can be a cool feature for those who are looking for something new and exciting in their blaster.

However, this may not be the right gun for you if you are looking for N-Strike range as the Vagabond is best for close to mid-range blasting.

When it comes to style, there is no other handgun out there like the Nerf Doomlands 2169 Vagabond blaster. When it comes to functionality, there are some areas where this blaster falls short of our expectations, especially in the design and distance of the gun.

That said, if you are looking for a blaster for a younger Nerf enthusiast who has no problem using it and is often close to their enemies, this is a great choice.

This product is a fine purchase, but you should make sure that you keep the above points in mind if you are going to buy the Vagabond.