Whether you are looking for a handgun, a motorized blaster, or a manual weapon that will give you more control over your blasting experience, there is something for everyone in this line.

One of the less talked about weapons in this series, which offers that “something in-between” experience for Nerf users who want a manual weapon that has more power and ammo than the average blaster, is the Nerf N-Strike Elite SurgeFire blaster.

Because it is less covered than some of the other blasters in this line, however, very few people know what to expect from the SurgeFire.

Do you fall into this group? Have you taken notice of the SurgeFire but have yet to purchase it for yourself? If so, take a look at our review here to get the most comprehensive scoop available on the Nerf N-Strike Elite SurgeFire blaster! Let’s dive in! 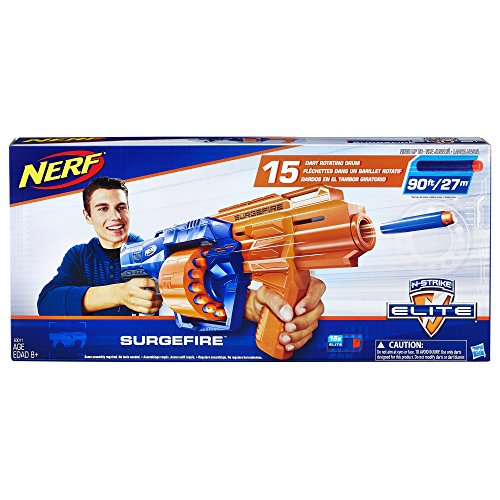 If you have paid close attention to the N-Strike series over the year, you will have noticed the subtle transition from blasters that use a plain blue color on the body to those that use a blue featuring an angular skin that adds more flair to the blaster.

Almost any Nerf N-Strike Elite blaster that features this skin looks far more attractive than the average product, which really boosts the appeal of the SurgeFire. 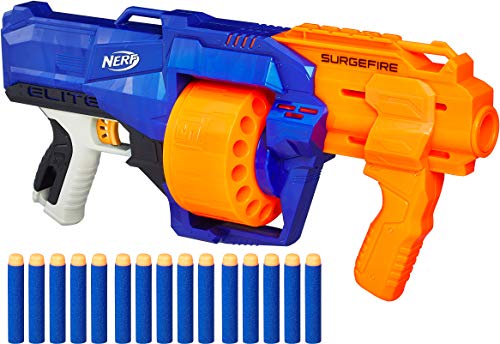 Besides this new pattern, the SurgeFire still incorporates the traditional orange in the center and towards the front of the blaster.

Beyond the color scheme, the body looks great too. This is a rather slim blaster with great detail that helps it to stand out from similar products in the line.

If having an attractive Nerf blaster is a must, the Nerf N-Strike Elite SurgeFire blaster will do the job.

Add to the fact that this is a manual blaster, which will allow you to conserve your ammo and better utilize your darts, this is an excellent amount of firepower to have on your side when you march into battle.

For those who are tired of manual weapons that offer little to no ammunition, the SurgeFire can do a lot of damage where other blasters fall short.

In order to fire all 15 of your darts, the Nerf N-Strike Elite SurgeFire uses a pump-action priming mechanism to prepare your blaster.

Unlike other blasters, however, the SurgeFire allows for slam fire action, which is a great help when you find yourself against overpowered opponents. 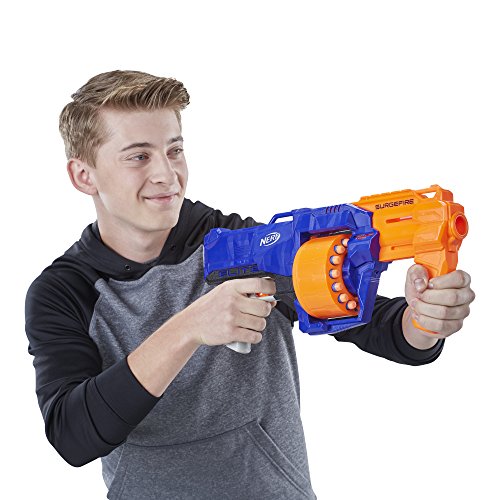 As this is a product from the Nerf N-Strike Elite series, you do get the 90-foot firing range that you would expect from the rest of their Nerf blasters.

Overall, with 15 darts at your disposal and the ability to rapidly fire them at enemies up to 90 feet away, you are going to be able to hold your own in any Nerf war with the Nerf N-Strike Elite SurgeFire. 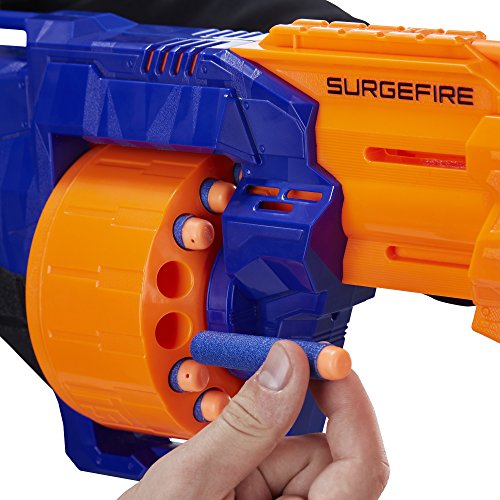 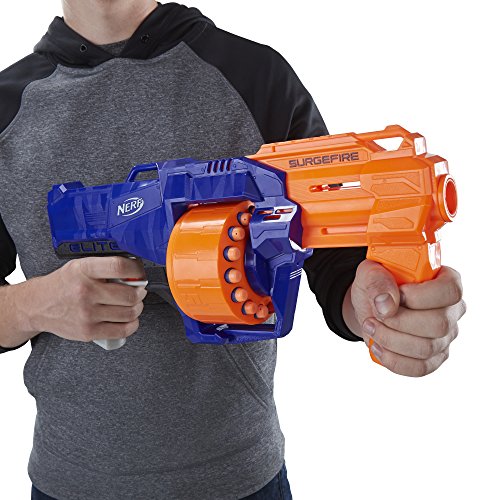 Despite some of the common issues that accompany pump-action blasters or manual blasters as a whole, this blaster is a great weapon overall.

With a new design that is attractive for the next generation of Nerf enthusiasts, ample ammunition to go up against motorized blasters and larger manual weapons, and a simple design that makes it easy for every user to operate, the Nerf N-Strike Elite SurgeFire is the perfect manual weapon for someone who wants a primary blaster that can rely on in the heat of battle!