Imagine this: you are silently creeping around the battlefield, slowly sneaking up on your enemies and taking them out one by one.

You are coming closer to one of your opponents when, oh no, your gun is out of ammo. When you’re in a pinch like this, you will need something to depend on. But what type of blaster is best for these situations?

There are a host of Nerf handguns that make excellent side weapons for those who are worried about running out of ammo at the wrong moment or needing a light blaster for close combat.

One such example of this type of blaster is the Nerf N-Strike Elite AccuStrike Series FalconFire blaster. Are you looking into this blaster for your next side weapon?

It is the most accurate Nerf Gun on the market!

We filmed a video unboxing and sharing our initial impressions about the FalconFire.

The style and design of this blaster is as precise as the accuracy offered by the Nerf N-Strike Elite AccuStrike series.

The FalconFire is a small, sleek blaster that uses light warm orange, snow-white, and charcoal grey in its design, resulting in a pleasant-looking gun that anyone would be glad to wield.

This simplicity and straightforward design is exactly what makes the Nerf N-Strike Elite AccuStrike Series FalconFire such a great weapon for stealth attacks and up-close encounters. If the FalconFire is on your wishlist, you are sure to find no flaws in this blaster’s design. 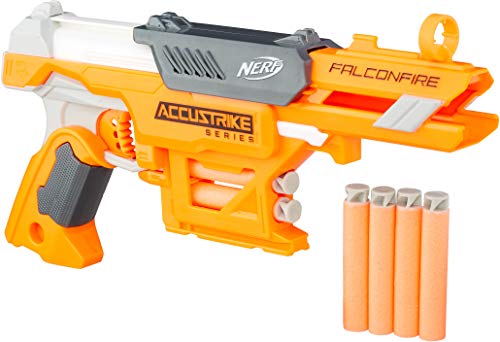 Like most guns designed to support your primary weapon, the FalconFire is a single shot Nerf blaster, which means that you are only able to load and fire one dart at a time.

As we’ve stated, this should be sufficient if you find yourself in a tough spot as the FalconFire is not a blaster that is designed to be used for heavy fire during Nerf battle. 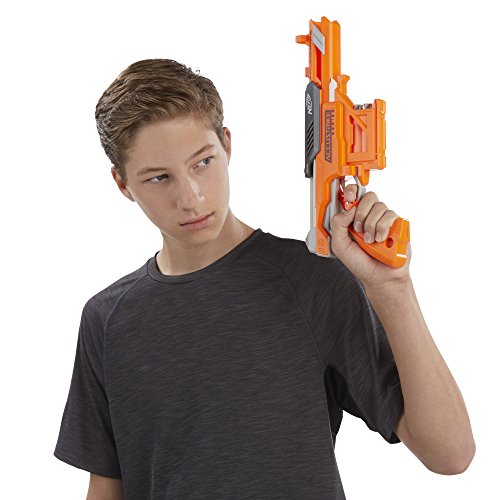 Feed your dart into this open space, close the priming mechanism, and fire at will. In any other circumstance, the average firing range of about 40 feet could be considered a problem.

However, because you are most likely to be using this weapon at close-range, this will be fast and accurate enough to hit your target with one shot.

The Nerf N-Strike Elite AccuStrike Series FalconFire blaster comes with built-in dart storage so that you don’t have to fish around in your pockets or on the ground each time you need to make a shot. 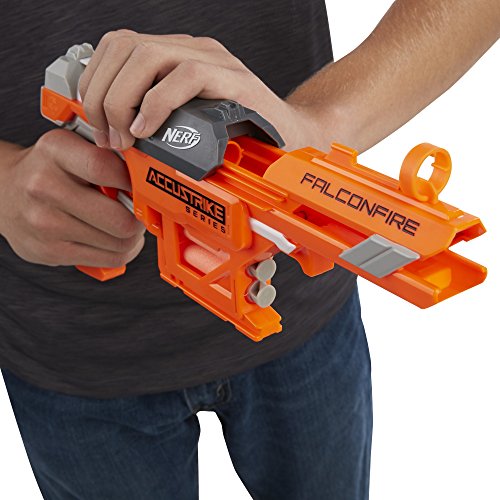 Directly below the center of the blaster is a small dart storage casing that can hold an additional two shots.

This means that, should you miss your target the first time, you have easy access to another two darts that will give you the opportunity to fire again. Considering most single-shot blasters tend to have no extra storage space, this is an extremely helpful feature as an additional firearm.

We didn’t have any complaints about the build or functionality of this blaster!

Everyone needs weapons that serve as a backup to their primaries. With its basic design, improved accuracy, and ease-of-use, the Nerf N-Strike Elite AccuStrike Series FalconFire is the perfect single-shot handgun for any users who wants that perfect blaster just in case.