A blaster that has made itself almost synonymous with the name Nerf. One of the first modern blasters to hit the market and a legend of the game.

True, the young'uns have broken every single record that it has set, but class is timeless, beauty is eternal.

So if you want to go back to a time when Nerf battles were less high-powered, or you want to pay homage to a legend of the battlefield, let me reintroduce you to the Nerf N-Strike Maverick. 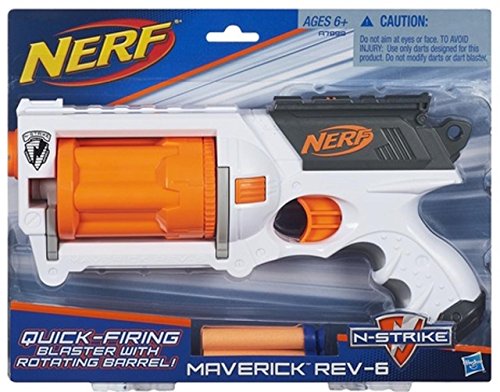 First released in 2005, the Maverick is based on a real-life revolver, you know the type wielded by gunslingers and renegades in the Wild West.

It has been succeeded by the Nerf Strongarm which outperforms it in all capacities, but it still retains its quaint charm.

Using the Maverick (especially if you want to use it for long) requires very precise configurations.

While loading the magazine, you have to make sure that each dart is pushed in properly. Avoid throwing and tossing the blaster because it seems to affect the air columns.

In open play, the Maverick can be a very versatile weapon. It's lightweight (coupled with a few tricks) makes it so that you can wield two Mavericks, one in each hand.

Always try to ensure that you have a good line of sight before shooting as the accuracy of the Maverick is not so wonderful and you only have 6 darts to waste.

If you want to actually put up a challenge in a Nerf battle using a Maverick, you have to make sure that there is a teammate covering your forays with a longer-ranged weapon (like the Centurion).

A good selling point of the Maverick is its low price. We live in a world where the prices of nerf guns are skyrocketing, some getting as costly as a hundred dollars or even more.

The fact that you can still get a Maverick for much cheaper, with all of the quality that you've always known from Nerf, I think it is something really commendable.

So, we'll be taking a tour through the components of the Maverick (the basic ones anyway), everything that makes the Maverick tick. Come along, let's get technical.

Micro darts: The standard darts of the Maverick are smaller than the Elite darts which you may be used to. They are small enough that you have to push them fully in while loading the magazine, if not, they'll probably jam.

These darts have suction tips and I think that is very cool. It means that they can stay attached to surfaces for a while after you shoot them, surfaces like a wall, a hung target, or someone's forehead (effectively branding them knocked out in an elimination nerf battle).

The Maverick can also shoot other types of darts including the Elite darts. The Elite darts tend to be more accurate than the original suction tip micro darts.

However, they do not stick. I'm sure it has something to do with air resistance and whatnot, but I wish they would stick.Okay, moving on to the blaster proper.

Grip: The grip of the Maverick is very comfortable. It is something you can use for hours on end without experiencing any aches or cramps.

The design has ridges to accommodate and properly nestle your fingers. This also improves your grip when nerf battling (as it often does) gets hot and sweaty.

Barrel: The barrel of the Maverick is short and stubby, as you would expect from a revolver themed handgun. Behind the muzzle, the sides of the barrel are open to accommodate the magazine.

On the muzzle, various types of N-Strike attachments can be added in order to enhance the quality of play and the delivery. On top of the barrel, you can find a priming handle and two sights.

Sights: The two sights are located on top of the barrel and help with proper aiming. To aim, line up the target so that you can see it through both sights, then pull the trigger.

Priming handle: The priming handle is located on top of the barrel, somewhat posteriorly.

Since the Maverick is a spring-loaded blaster, you need to prime before every shot. To prime, just pull the priming handle backward, then allow it to slide forwards.

There are a tactical rail and a sling attachment point present on the priming handle.

Tactical rail: A tactical rail is present on top of the priming handle of the Nerf Maverick.

Just like any other tactical rail, you can slide on whatever attachments you need to take your game to the next level, be it laser tags, night vision, scopes, or whatnot.

There is a problem, however, with the positioning of the tactical rail. Since it is placed on the priming handle, any accessory that has been attached to it will interfere if you wish to slide the priming handle.

This makes the action of priming a little bit clumsy. I overcome this obstacle by holding the priming rail by the sides while pulling it.

Magazine/cylinder: The magazine of the Maverick is in the shape of a wheel, with the rounds studded circumferentially on the wheel. It is housed the hollow barrel and rotates after every shot is made.

Though, it has also been K own to rotate when the blaster is tossed in the air.

Magazine release button: This is located on the side of the Maverick. Pressing it slightly ejects the magazine out of the body of the blaster towards the left.

In this mode, you can now load the magazine with darts, two at a time.

Trigger: The trigger is located just in front of the grip, under the barrel. It only works when the blaster has been properly primed.

When primed, pressing the trigger shoots a dart out of the muzzle. It also moves the magazine a step counterclockwise to get another dart ready for shooting. Darn. I really wish this thing had slam fire.

How to shoot this blaster:

First of all, you have to unpack the blaster. Then, get six of your suction tip darts or Elite darts or whatever type of darts you would want to use.

To prime, pull the priming handle on top of the barrel backward, then allow it to slide forward. Now, it is properly primed.

The next step is to pull the trigger. Pulling the trigger will release a dart out of the muzzle in an explosive burst of power.

Reprime and shoot again. Keep shooting until all the bullets are gone. Then eject the magazine, reload, reprime, and blast away.

Often, the Maverick is customized in ways so as to make its output much more formidable. There are mods that increase the range on the Maverick or that remove air restrictors so as to increase shot velocity.

Other mods can cause the magazine to be able to eject guy, and still, yet other mods can present you with a detachable magazine. You could keep 2 or 3 of such magazines preloaded in your vest. Imagine the tactical possibilities.

I will also share a technique I use that makes it easier for me to not only wield two Mavericks but also to prime them bote with minimal stress.

This is how it goes. Attach a piece of sturdy string to the string attachment points on both priming handles of both blasters. The string will be connecting the two blasters.

Whenever you want to prime both guns, pull them apart from each other. The pull on the strings will transfer to the string attachment point which in turn will pull on the priming handles causing both blasters to prime.

And all that just at the cost of a little mobility. But if that is the price to pay for me to look like a character straight out of the Wild West, down right to the double revolvers, I think it is worth it.

Mod friendly?: There seems to be an entire community based around modding the Maverick. However, the official stance of Nerf does not support modding.

With the new high-powered blasters coming out every day, the Maverick is starting to look a little plain vanilla.

But if this gun pushes your buttons, then I wholeheartedly validate your choice, as do thousands of other nerf gun lovers.