Sometimes, you've had just enough of the heavy guns. Ugly looking things that have tanks of ammo and can shoot eight balls at once.

Sometimes you want some sleekness, some selectiveness, some stealth, something subtle, something requiring strategy. I know just the gun for you.

Let me to introduce the Nerf Rival Kronos. 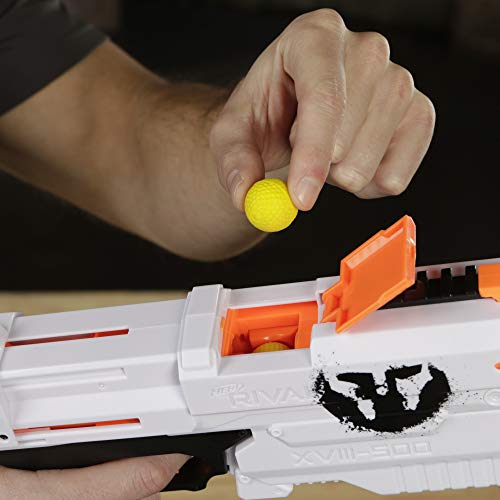 The Nerf Rival Kronos is a portable pistol-like sidearm. It is spring-loaded and has an internal magazine that can hold 5 balls, although t if the magazine is modified, it can hold an extra ball.

Like the rest of the Rival series, the Nerf Rival Kronos shoots balls at a very high speed. These balls don't do so well outdoors due to their aerodynamic design. But indoors, they quickly dominate with their fast projectile velocity.

The Nerf Rival Kronos is a sidearm and as such may not be your first choice weapon. But it's nice to have it as a trusty backup tucked into a holster somewhere. Perhaps the Nerf Battle has dragged into an endgame.

Ammo levels are running low. A point comes when your opponent is convinced that you are out of ammo and he saunters out into the open. Before he can react, you pull the Kronos from your holster and BAM!

Due to the Kronos' limited ammo capacity, you do not want to be getting into drawn-out slugfests with this one.

A quick engagement and then a retreat or a slow and stealthy ambush should be your game plan. 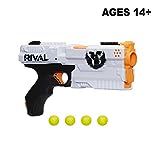 Are you interested in purchasing the Nerf Rival Kronos?

Or would you want to know more before making up your mind? You are at the right place. Sit back and let me guide you through the intricacies of this sleek blaster.

​The pack of the Nerf Rival Kronos contains the blaster itself, a few rounds, team indicators flags, and the instruction manual.

The flags are a little bit longer and you may want to take care and keep their distracting waving out of your line of focus.

Grip: The grip of the Nerf Rival Kronos is really excellent and comfortable to use. The grip is designed in such a way as to be comfortable for both smaller hands and bigger hands to hold on to.

The ergonomic design ensures that your hands do not chafe during extended periods of holding on to the grip. At the bottom part of the grip, there is a ring where you can attach your team indicator flag. 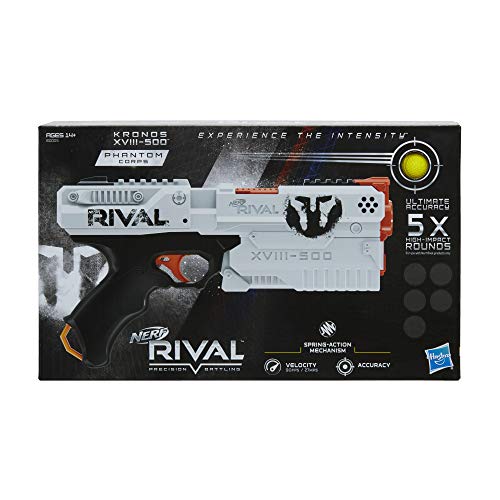 Barrel: The barrel of the Kronos has a wide enough caliber to accommodate the balls that it shoots. You won't be able to use barrel attachments due to how the shape of the barrel is. Above the barrel, you can see two tactical rails.

Tactical rails: Just like the Zeus, the Nerf Rival Kronos possesses two tactical rails located on the top of the barrel. You can use these tactical rails to attach your scopes and other accessories that can make nerf battles more fun and fulfilling.

However, unlike the Zeus, the tactical rail of the Kronos has one towards the front part of the barrel and one towards the back instead of side by side. Also, the rails are not detachable.

Priming slide: the priming slide is located at the end part of the Kronos' barrel. It serves to prime the blaster since the Kronos uses a spring-loaded mechanism.

To prime the blaster, you just have to slide the primer back and forth and then you can shoot.

The traction grip on the priming slide is one of the little details that impress me about the Cronos.

Without it, well, let's just say that it's quite hard to pull a smooth slider backward using greasy or sweaty hands. The traction grip improves this detail and makes it easier for you to prime your blaster quickly. 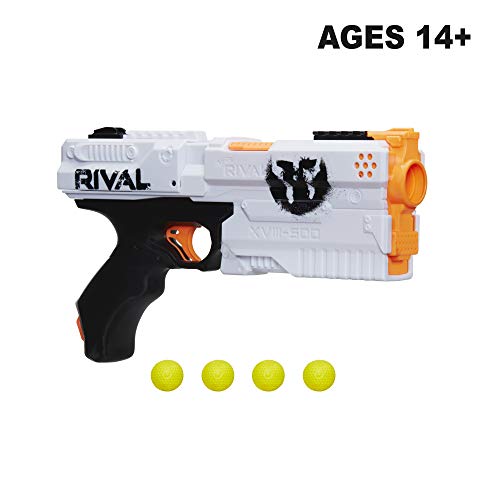 Priming indicator: At the tail end of the priming slide, there is an orange indicator that helps you know if your blaster is primed or not. And it works in a very simple way when compared with some more technical priming indicators that you can find on other blasters.

Magazine: The magazine of the Nerf Rival Zeus is inbuilt. The opening to it is located on the top part of the barrel. It contains a maximum of 5 balls and so this is not your weapon for extended firing.

I think the makers went for a smaller magazine in order to maintain the lightweight nature of the Kronos, and I can't say I'm displeased with that.

Unjamming button: Though very unlikely, sometimes a ball gets jammed in the magazine and you cannot pull the trigger.

The unjamming button is located at the tail end of the barrel next to the priming indicator. Press it and it allows you to access the magazine and sort out whatever may have gone wrong there.

This takes slightly more time than the unjamming buttons in other nerf guns that just shoots the offending ball out for you. 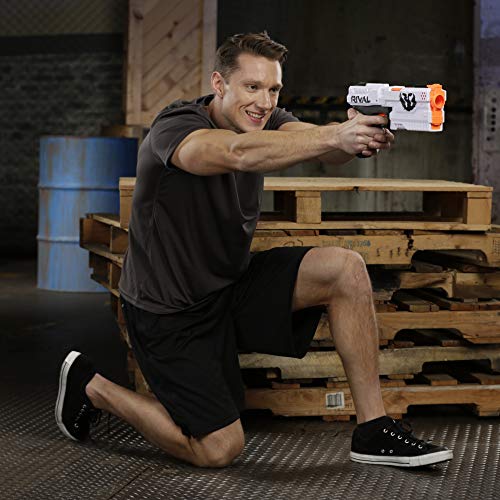 ​The first step in using the blaster is loading.

To load you must pull the priming slide back. This allows you to access the cover of the magazine slider on top of the barrel.

Open the cover and push in five balls, one at a time.

Then, close the cover and push the priming slide forwards. You are locked and loaded.

The next step is firing. The Kronos is spring-loaded, so you have to prime it before every shot by moving the priming slide back and forth. If the priming indicator shows an orange light, then the blaster is properly primed. 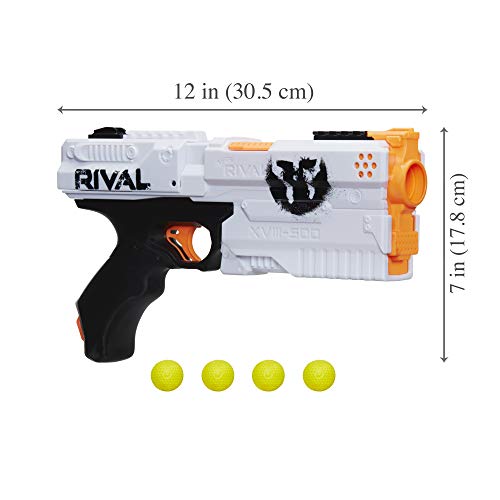 ​Don't prime before storing: Just like any other spring loader, it is not advisable for you to store your blaster in the primed position. So, always shoot that last ball, and don't reprime before putting your blaster away.

Distracting team flag indicators: Attaching the team flag indicator to its mount at the grip of the blaster can be quite distracting. You're trying to steady your aim on an opponent. Just as soon as you are about to fire, a breeze blows the lengthy flag into your face, messing up your aim.

It might be more functional to tie the flag around your arm or around your forehead where it can still serve to identify your camp without distracting your aim.

Prime lock: The Kronos is made is such a way that you can't move the priming slide  when the blaster is already primed. This can cause problems as you need to move the slide backward in order to relieve a magazine jam.

So, if you're primed and there is a jam, press the unjamming button. It allows you to move the slide backward so that you can access the magazine and rectify the jam.

Not very powerful, not so much ammo. But this trusty pistol is lightweight and accurate. It can shoot far and packs quite a punch. A very necessary addition to the Rival series.