Most Nerf blasters are excellent outdoor weapons, but for those who have smaller homes with minimal space to move around, some of the heavy-duty blasters you have seen so far may not be the right fit for families with kids who spend most of their time inside.

However, that is not to say that there aren’t Nerf blasters better suited for their needs. One great indoor alternative to larger dart blasters are disc guns, such as those offered in the Nerf Vortex series.

If you are looking for an excellent beginner weapon in this series, let’s dive deeper into the Nerf Vortex Vigilon disc blaster and what type of experience it can offer for you.

The Nerf Vortex Vigilon blaster looks like most handheld Nerf blasters do. In fact, if you bought it without knowing that it shot discs, you probably wouldn’t notice that it was any different until you tried putting darts into the blaster’s body! 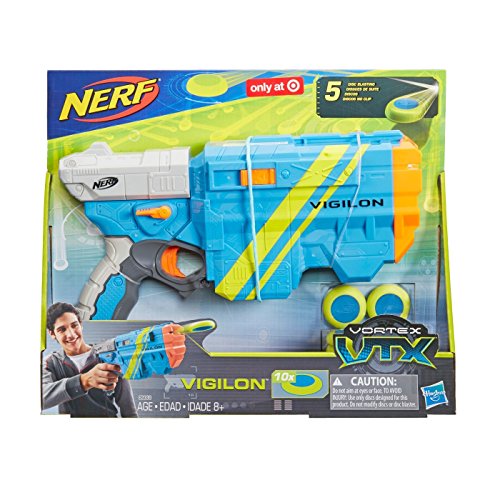 This blaster has a small body that is perfect for Nerf enthusiasts of any age and features plenty of different designs to choose from (there four different versions of this blaster on the market). These options include: 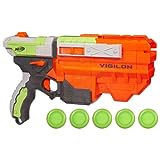 Nerf Vortex Vigilon Blaster
$29.96
Buy on Amazon
The Subsequent Sonic Series Nerf Vortex Vigilon: Unfortunately, these products are a little harder to find and less available than their counterparts. However, this option sports a clear green casing with orange elements that is reminiscent of a water gun. 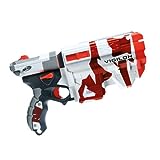 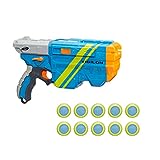 Given that you have so many options to choose from, the Nerf Vortex Vigilon is a great weapon for those who want to diversify their collection and find a blaster that is perfectly tailored to their needs.

Unlike some of the disc blasters that you may have used in the past, the Nerf Vortex series stands out by using XLR (Xtra Long Range) discs for the blasting experience.

XLR discs are made out of a strong yet flexible type of plastic that offers improved accuracy and firing distance. 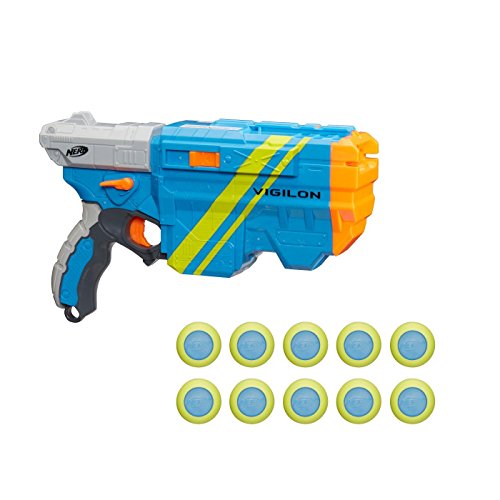 While you can find larger blasters in this series, the Nerf Vortex Vigilon offers a comfortable 5-dart capacity that is perfect for those who are looking for a handgun to use during their battles.

Additionally, this blaster is made more convenient by offering a drop-down, built-in clip that offers easy reloading access when you are ready to prime and fire your weapon!

The Nerf Vortex Vigilon has the same priming mechanism like many other Nerf handgun blasters, utilizing a pull-back portion on the top that allows you to prime your weapon on each fire. 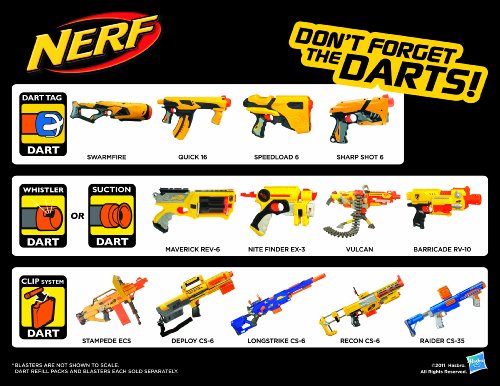 Simply flip the switch on either side of the handle, load your XLR discs into the drop-down clip, push the clip back in, prime your weapon, and fire at will!

The Nerf Vortex line offers an impressive 60-foot firing range (although you should remember that discs will lose speed as they encounter air resistance while traveling toward their intended target).

Although there are no mind-bending features on this gun, we do like that they included a manual release in the middle of the gun.

This feature is similar to the jam door on other blasters. However, the manual release will spit out any trapped discs rather than requiring you to fish them out, which is a major plus for this weapon! 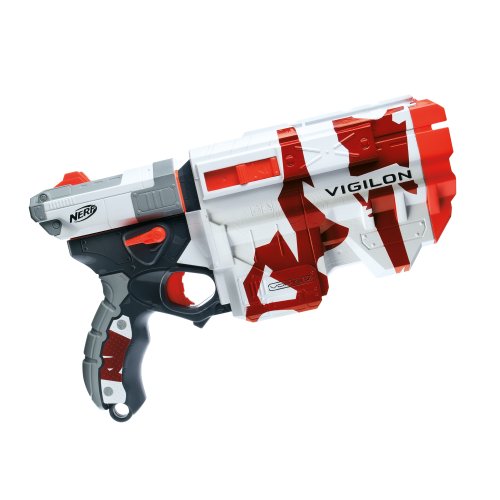 At the time of writing, there are simply no problems that we can find with this blaster!

When Nerf breaks away from their traditional products, things generally either go very good or very bad.

Fortunately, in the case of the Nerf Vortex Vigilon, Nerf has done an excellent job of creating a disc blaster that works great in indoor environments.

Put simply, if you want a greater starter gun to help you shift into the disc-blaster Vortex series, the Nerf Vortex Vigilon is an excellent, reliable blaster to add to your collection.