Many of the Nerf Zombie Strike series blasters that we have covered thus far have demonstrated just how creative and exciting themed Nerf blasters can be.

That said, quite a few of the options featured in this series have been relatively limited in performance due to the lack of ammo available on Zombie Strike manual weapons.

Fortunately, however, there is an equal number of powerful blasters that look great and get the job done on the battlefield. One of these blasters is the Nerf Zombie Strike Doominator blaster, which is a force to be reckoned with that makes for an excellent primary weapon against the hordes of zombies in your area.

But enough talking about how great this blaster may be! Let’s take a closer look at the Nerf Zombie Strike Doominator blaster and exactly what it has to offer for the ambitious hunter!

If you are familiar with any other products in this series, you know what to expect when it comes to the design of the Nerf Zombie Strike Doominator blaster.

Featuring the traditional green and orange color scheme (and signature elements like the crosshairs Zombie Strike logo and the fake gauze wrapping found on the handle), the Doominator is another entrance in this series that stays true to the aesthetic that the line of blasters seeks to achieve. 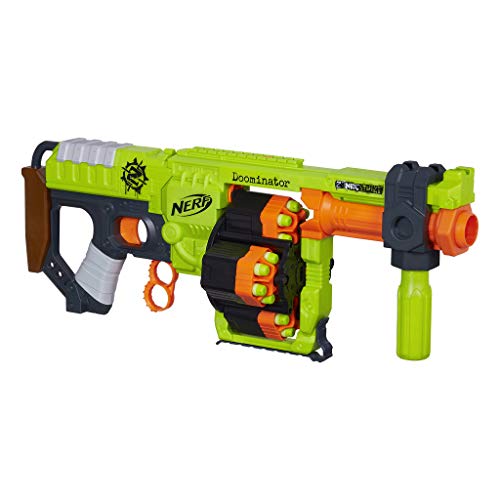 Despite its faithfulness to the series, we do think that the Doominator looks far more militaristic than some of its counterparts, which is largely due to the many features built into this blaster. We’ll tackle these exciting additions throughout the course of this review.

As we mentioned in the introduction, the most exciting part of this blaster is the amount of ammo that it has. Using the Nerf Zombie Strike gives you access to 24 darts at a time, which are presented in the form of four rotating, six-dart drums. 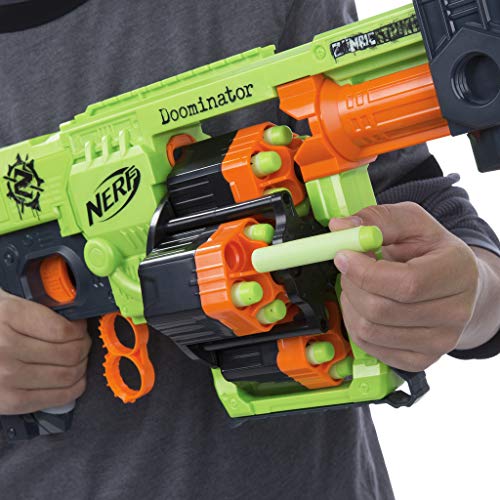 This gives you full control over your ammo supply and provides you with more than enough firepower to take down any enemy that may come your way.

Considering its complex construction, the feat of placing four rotating barrels in the same blaster is impressive enough and so is the number of darts you are able to fire with the Doominator.

The Nerf Zombie Strike Doominator blaster uses pump-action blasting to deliver all 24 of your foam darts. Simply pull back on the handle located at the front of the blaster and pull down on the main trigger to fire at your enemy. 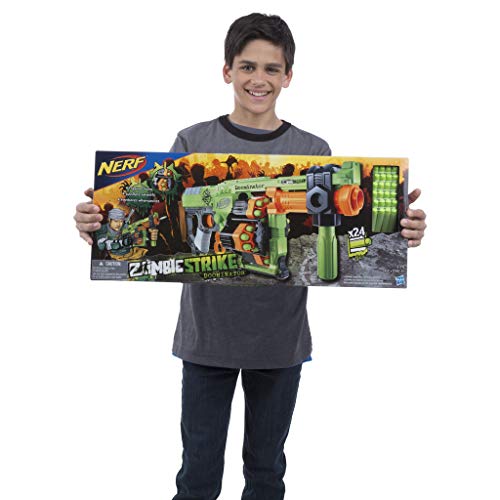 If you find that you have run out of all six darts in one of your drums, all you have to do is pull back on the two-finger trigger located directly in front of the handle.

While you won’t get the distance that you would expect from products of this caliber, you will be able to fire your darts up to 40 feet, which is fair for those expecting to use the Doominator for mid-range shots.

The one unique feature that the Doominator does include, however, is the detachable, 3-position handle that controls the pump-action mechanism at the front of the gun.

Traditionally, most handles sit directly below the barrel of the gun, which is true of the Doominator’s handle as well.

If you feel as though you would benefit from having the handle on the right or the left side of the blaster’s body, you can take it out of this position and place it in one of the other provided slots to improve your blasting experience.

Although this isn’t a major feature, it can improve functionality for some users.

Plenty of Firepower: If you’re looking for a blaster that will provide you with the necessary firepower to dominate the competition, the Nerf Zombie Strike Doominator is an excellent blaster to consider.

With 24 darts, all packed into four, six-dart drums, you are going to have more than enough ammo to take on whatever enemy may come your way.

Intimidating Design: Although the Doominator does feature all of the elements you are looking for in a Zombie Strike weapon, the rotating barrels, militaristic design, and sheer force of the blaster makes it intimidating to anyone who chooses to stand against you

If you want a blaster that announces your presence and tells your opponents who’s boss, you are sure to love the Doominator.

Ease-of-Use: Having a blaster that is easy to use is necessary if you want to succeed in a Nerf battle. While some users have reported occasional jamming issues (which is to be expected from pump-action, slam-fire blasters), this gun is easy to operate, performs as advertised, and makes it simple to use all of the moving parts that come installed on this weapon. 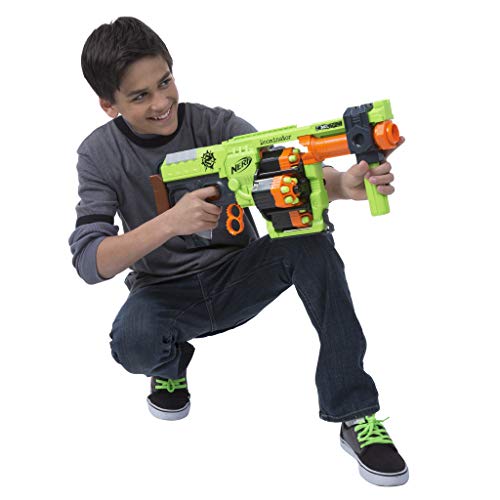 Easy Access to Rotating Drums: As you may have already anticipated, we are going to praise the fact that it is fairly easy to access the rotating drums on this blaster.

There are a few hard-to-reach areas on this blaster that can make it difficult to reload but you have full access to your drums when they are on the sides of the blaster.

Just load your darts into the barrels when they are on the left or right sides of your gun, rotate them until the unloaded drums are in the right position, and repeat the process until you are fully stocked.

Improved Stability With Detachable Handle: Like we said in the section above, the detachable, 3-point handle isn’t a huge deal. However, for users who find that they have trouble using some of their other blasters because of the handle placement, this is a miracle.

Additionally, you change these positions at any point during use, making it easier to improve your stability and accuracy if a certain position isn’t working for you when you are in the middle of combat.

Time-Consuming Reload Process: 24 darts is a significant amount of ammo for those who have issues with most manual weapons. However, this feature is often considered to be both an advantage and a disadvantage.

While you do have 24 darts to fire at your enemies before you will need to reload, the act of reloading is not as simple as placing a clip into your blaster and preparing to fire. 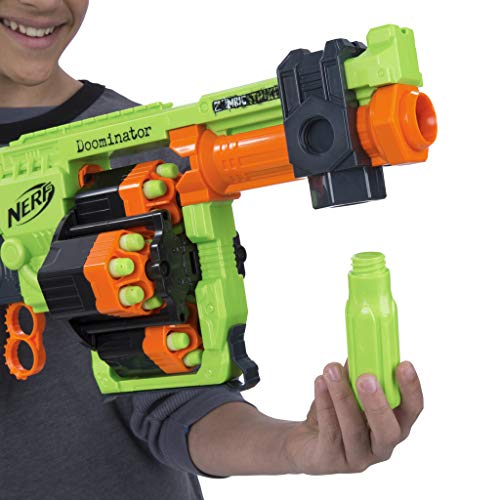 With the Nerf Zombie Strike Doominator blaster, you will need to physically insert all 24 darts into each of the rotating drums before you can use your gun. If you can do this relatively quickly and without being hit while you are reloading, excellent!

If, however, you know that you are going to struggle while you are trying to reload your weapon, this may not be the best product for you.

There’s not a lot of manual weapons out there that have a near-perfect reputation, but the Nerf Zombie Strike Doominator is certainly one of them that makes the cut.

From its intimidating, easy to use design to its impressive 24-dart capacity, those who are looking to make a splash in their Nerf battles can trust the Doominator to do its job.

If you want a Nerf gun that seamlessly integrates simplicity and usefulness, you should seriously consider the Nerf Zombie Strike Doominator blaster for your next purchase.