When it comes to Nerf blasters, the term “unique” gets thrown around quite a bit. Whether it is in regards to the style of blaster, additional features that may not be seen in other lines, or simply new design elements that may have been placed to enhance the traditional Nerf gun image, there are plenty of blasters that can be coined unique.

That said, when you combine the aesthetics of a special Nerf line with a breed of blaster that you rarely find on the shelves, that is when you get something that is truly special for almost any Nerf enthusiast.

One of these products is the Nerf Zombie Strike Dreadbolt.

With all of the striking design aspects of the Zombie Strike series and the body of a crossbow (trust us, the firing mechanism on this product will completely take you by surprise), the Dreadbolt is certainly something you have never seen before.

But does it perform as well as it looks like it should?

If you have the Dreadbolt in your sights, let’s take a closer look at this unique blaster and find out exactly how well it performs.

If you’re used to blasters in the Nerf Zombie Strike series, you are accustomed to that gritty dark green and orange color scheme that makes any scene feel truly apocalyptic.

While the Nerf Zombie Strike Dreadbolt doesn’t stray away from the traditional colors, it is a bit lighter, which can make it feel a little bit more easy-going for fans of the series who aren’t too into the seriousness brought upon by the many design aspects that have set the tone for the series. 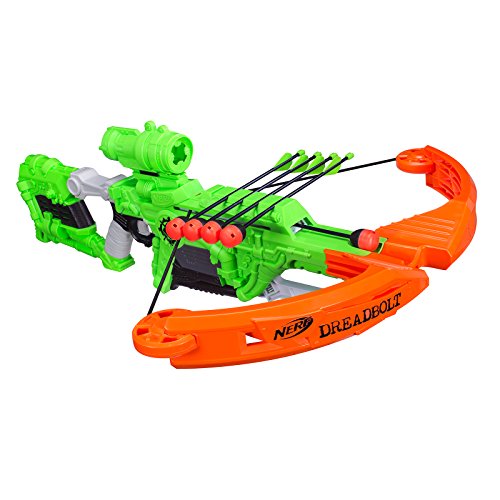 ​That said, it truly packs a punch in the looks department with its crossbow body. Featuring a tangle of mechanical elements that pop and a large orange bow at the front of the blaster, this gun is hard to miss and can be quite intimidating to other enemies on the battlefield.

While we won’t dive too deep into what else is featured on the body at the risk of jumping the gun before the other sections, we are quite happy overall with the body and how well it fits in with the other blasters that can be found in the Nerf Zombie Strike series

Although there are some Nerf weapons out there that use darts with blasters that have crossbow designs, you aren’t going to find this on the Nerf Zombie Strike Dreadbolt.

Instead, the Dreadbolt uses actual Nerf arrows equipped with whistling tips for further intimidation on the battlefield. Armed with five Nerf arrows, you are certainly going to make an impact on the competition. 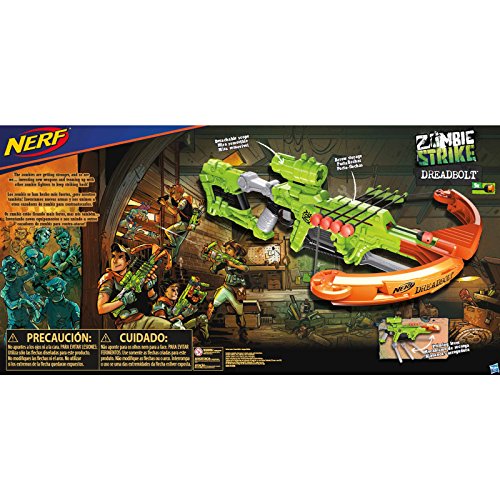 This is yet another area where the Dreadbolt stands out from other weapons. Instead of using real crossbow priming action (which, we know, may take away the fun for some Nerf players who were looking forward to using a crossbow), the Nerf Zombie Strike Dreadbolt uses lever-action priming to prepare your arrows for their journey. 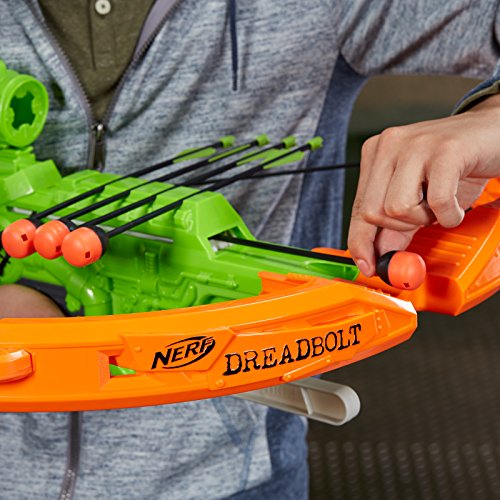 Once fired, it is said to be able to fire a reasonable 40 feet (although some sources extend this to a generous 85 feet if it is angled properly).

This may be a disadvantage given the speed with which this loads and the number of arrows you are given, but we will discuss this in the sections below.

We always love a Nerf gun that has something more to offer, especially if it improves the overall functionality of the blaster. In the case of the Dreadbolt, it comes with two extra features.

The first is a detachable scope that can help you find your target and operate your gun more efficiently. The second is the storage space located on top of the blaster, which allows you to hold all five of your arrows at once.

Because the gun is so large and the arrows are far more difficult to carry than traditional Nerf darts, this feature is an excellent choice and one that we commend. 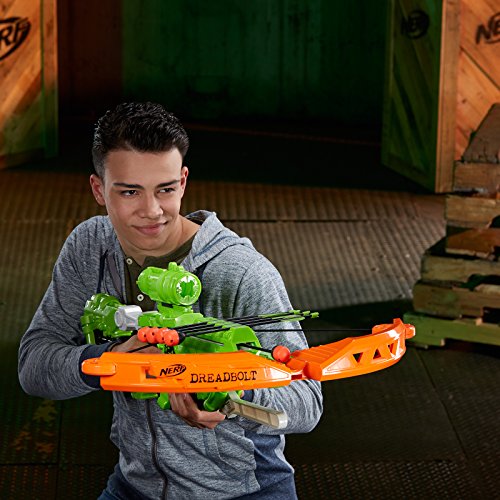 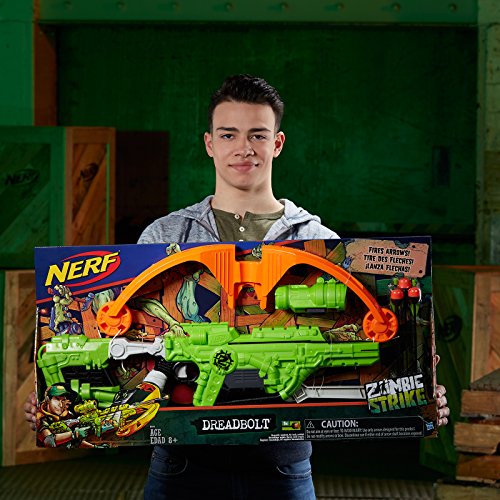 Don’t get us wrong, the Nerf Zombie Strike Dreadbolt is still a good weapon. From the classic zombie shooting crossbow design to the features that we wish every blaster would have, this is a unique weapon that will make a great addition to any collection.

​That said, this is also a Nerf gun that needs to be understood in order to make it a great investment. If you don’t have the time or the patience to work with the gun (or if you simply can’t hold and use it), it is not going to be worth purchasing.

If you can work it, then you are going to really enjoy using the Dreadbolt in your next battle!