If you’ve never shot a Nerf guns with hammer-action capabilities, you’ve yet to play with some of the smoothest blasters on the planet.

Unlike many other priming mechanisms, hammer-action priming makes the process as easy as pulling back on a small button on the back of your gun and allows you to free your hands for other important processes such as operating another blaster or quickly reloading.

Put simply, you can’t get any better than a hammer-action Nerf gun. But where can you get started on finding one and how do you know if it is right for you?

If your next purchase is going to be a blaster with a hammer priming mechanism and you need some guidance in the buying process, here is a list of some of the best hammer action Nerf guns available that you can buy now!

Take along the Nerf Doomlands 2169 Persuader blaster to convince the lawless criminals to surrender! The hammer-action Persuader blaster fires 4 darts in a row, comes with 4 foam darts, and has a clear area that reveals the inner firing mechanism.

Whether you are in need of a mini-blaster for stealth shooting or you have a very young Nerf enthusiast who is not yet able to handle some of the larger options, the Nerf Zombie Strike Doublestrike blaster is the perfect option for you.

The Nerf Zombie Strike Doublestrike blaster features the great-looking, apocalyptic design that you expect from the rest of the series.

The plain, slime green body of the blaster contrasts well together with the traditional orange of the Nerf series, which is all tied together with a gauze-wrapped handle to keep things steady while you are fighting off the zombie hordes!

As you may have guessed, this mini-blaster can hold up to two darts and fire one right after the other. 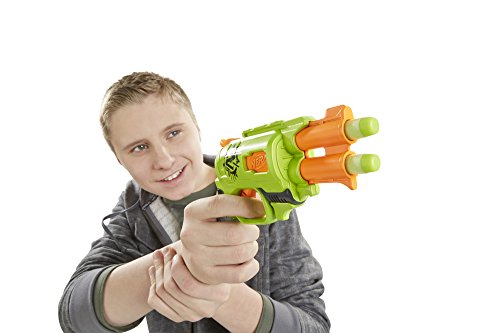 The Doublestrike knows which barrel is loaded and there is no need to change your bullets around. Just pull back on the hammer and fire! You can expect this little gun to reach a whopping 65 feet when fired.

There are a few things that should be mentioned about this piece. One problem that you may encounter is that bullets can slide easily out of the gun if it is loaded and pointed downward.

You are going to want to make sure that you hold your blaster horizontally whenever you have loaded your gun.

Additionally, pulling back on the hammer may cause a bit of air to be pushed inside the barrel, which can force your darts forward.

As long as you keep your arts in place whenever you prime your weapon, you will be fine.

Aside from these two small issues, the Nerf Zombie Strike Doublestrike blaster is a great stealth or start weapon for any Nerf enthusiast!

If you’re looking for a functional pistol that will allow you to take on your enemies with ease, the Nerf Zombie Strike Hammershot blaster is the right option for you.

The Nerf Zombie Strike Hammershot blaster has a much more rugged design with darker colors that help to bring a more serious and striking weapon to the battle.

This is further enhanced by the rotating five dart barrel at the front that freely shows your bright green Zombie Strike darts.

Much like it is easy to fire the gun, there is plenty of room at the front so that you don’t have to worry about struggling to get your darts into the barrel. Just pull back and watch your darts fly to around 75 feet.

Unlike our previous option, there doesn’t appear to be too many issues with this model and those who have purchased it have been very happy with its performance and functionality.

For those who are looking to take down their enemies with dual-wield pistol action, the Nerf Zombie Strike Hammershot blaster is one of the best hammer action options you can choose from.

Much like the Zombie Strike series, the Nerf Doomlands 2169 comes with an equally exciting backstory about an apocalyptic landscape caused by an asteroid strike that formed mutant life and cultivated a lawless society.

With the Nerf Doomlands Persuader blaster in hand, you are sure to keep everyone in line.

What we really like about the Doomlands series is that it goes the extra mile with each blaster design.

In the case of the Nerf Doomlands Persuader blaster, this handgun features a mechanical burnt orange and dark gray shell that makes the blaster look futuristic.

It also comes with the characteristic transparent casing near the barrel that allows you to see what is going on inside when you are firing your blaster.

Beyond the design of the blaster, the performance is just as unique. The Persuader is capable of holding and firing up to four darts at a time. 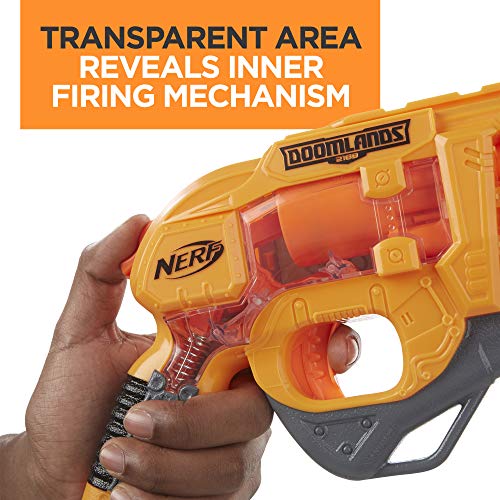 However, this model decides to use a vertical four dart barrel that fires your darts with each pull of the hammer. You can expect to comfortably fire at enemies at mid-range but you may experience some range loss as you go down each dart.

As with other hammer action guns, you should be careful not to point your gun at the ground and make sure that your bullets are firmly in your weapon before firing.

Unique blasters are always exciting to carry into battle and are even better when they get the job done.

If you want something that does both, the Nerf Doomlands Persuader blaster is one gun that should not be overlooked!

For a weapon known as the Negotiator, you can expect your enemies to surrender instead when they see the Nerf Doomlands Negotiator blaster.

The Nerf Doomlands Negotiator blaster has the same design that you would expect from the rest of the series, with a massive barrel at the front that is sure to intimidate anyone who sees this handgun.

The front of the gun is significantly larger due to the fact that it is able to hold and fire up to 8 bullets at a time with its rotating barrel.

As with many other barrel blasters, you have plenty of room in the front to load your weapon. All you have to do is pull back on the hammer and launch the darts at your enemy up to 75 feet away.

Because the front is so big, it can be a little awkward to hold for some users. If you are purchasing a gift for a younger child, make sure to keep this in mind as it may make it harder to take advantage of the one-handed firing.

Otherwise, this is a great weapon for anyone who needs a side gun when their primary blaster is out of commission.

For Nerf encounters that will leave your opponent in awe, go for the Nerf Doomlands Negotiator blaster.

Last but not least, we have the nerf Doomlands Lawbringer blaster, a product that is guaranteed to give you everything that you could possibly want out of a manual blaster.

The first thing that we would like to point out about this blaster is that it blends styles to produce a theme that truly matches the title.

While you see many of the design aspects you would expect, the body of the gun and its attachments also evokes the feeling of a cowboy/western weapon.

This is exactly what you would expect to see when presented with the name “Lawbringer”. However, Nerf also improved upon their existing aspects, such as providing a larger and clearer transparent area on the weapon.

The Nerf Doomlands Lawbringer blaster (2169 Review) itself is a medium-sized rifle gun with an awesome 12-dart, rotating barrel that gives you plenty of ammo to take down your enemies with. (You can easily feed your bullets into the barrel through the front as well.)

Nerf goes above and beyond, however, by equipping you with a stock that helps you steady your weapon and gives you extra storage for another 12 darts!

Considering it can be difficult to carry extra ammo around for manual weapons, this added ability makes this blaster a win in our book.

Once primed, you can expect to you can expect to reach enemies approximately 50 feet away. If you want the power to bring law and order to the chaos of your Nerf battles, you should make the Nerf Doomlands Lawbringer blaster your next purchase!

While Nerf has many priming mechanisms, the hammer action Nerf guns are some of the best due to the ease-of-use that comes along with having to simply pull back on a small piece of plastic.

If you want a hammer action weapon but don’t know which one is best suited for you, choose from the five options above to make sure that you build your collection with some of the best Nerf blasters around!