Besides power, accuracy is one of the most important things to look for in a Nerf gun. All puns aside, however, accuracy can be a bit of a hit or miss throughout various Nerf gun series. Finding a blaster that can actually deliver on its promise is, for some, very necessary.

Fortunately, there are Nerf blasters that are designed to offer a more accurate experience. Take, for example, the Nerf AccuStrike series.

One excellent entry in this series that you may have come across is the Nerf N-Strike Elite AccuStrike RaptorStrike blaster. But as it goes with most weapons, can the RaptorStrike deliver on its promises and offer the blasting accuracy you’re looking for?

If the Nerf N-Strike Elite AccuStrike RaptorStrike is a product that someone you know has been wanting, we’ve conducted a thorough review of the RaptorStrike to provide you with what you need to know before you buy. Let’s dive in!

The Nerf AccuStrike series offers a refreshing twist on the traditional Nerf color scheme. The Nerf N-Strike Elite AccuStrike RaptorStrike is a long blaster with a strikingly orange body and sleek black design additions across the side of the product.

What we like with this blaster is that its features are much sharper, creating a more modern, minimalistic feel than the mechanical design you would expect from most other Nerf guns. These features are then built upon by the many extras that come equipped with this weapon.

If you’ve been on the hunt for a blaster that looks a bit different than the average product, you are definitely going to enjoy having the RaptorStrike in your arsenal.

Although this can seem like a relatively small amount, it’s important to note that the RaptorStrike was designed to be a long-range weapon, meaning that you would most likely be firing shots from a further distance at an enemy (although you can certainly use it as a primary weapon).

Overall, the clip system should help keep your blaster replenished at all times and provide you with enough ammo to take out the enemy.

The Nerf N-Strike Elite AccuStrike RaptorStrike uses a bolt-action priming mechanism on the side of the weapon to prepare your shots.

Just pull back on the bolt, push forward, and fire at will. The estimated range for this weapon is anywhere from 50 to 75 feet. 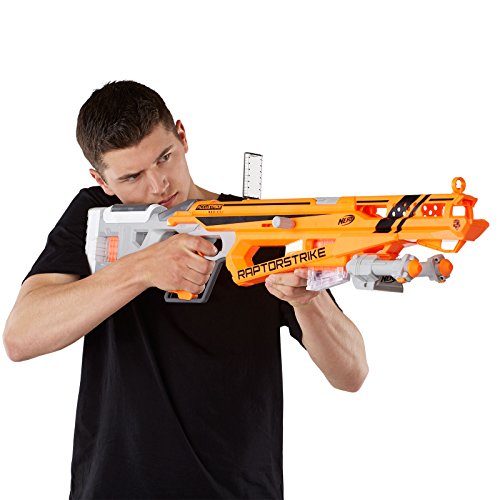 While this may not measure up with other blasters in the Nerf N-Strike Elite lineup, it will still perform well in most environments, especially at further ranges.

But where does the accuracy come in? The improved accuracy actually has nothing to do with the blaster itself. Instead, the accuracy is said to be a result of the dart design.

Nerf AccuStrike darts feature a spiral tip that is said to help them maintain balance and shoot straighter than other Nerf darts.

Additionally, the weight for these darts is different, which is said to play a role as well. If you’re looking for more control and better accuracy, the RaptorStrike will provide.

This blaster has a couple of unique features that will help you get more out of the weapon.

For those who intend on taking advantage of the Nerf N-Strike Elite AccuStrike RaptorStrike as a far-range blaster, Nerf has included a bipod that can help you keep your weapon steady as you aim at weapons.

They have also included a pop-up scope that can be used to improve your shots as well as a shoulder stock that will help you prevent your gun from moving too much during a shot.

Even better, the shoulder stock offers you extra storage space for another dart clip! 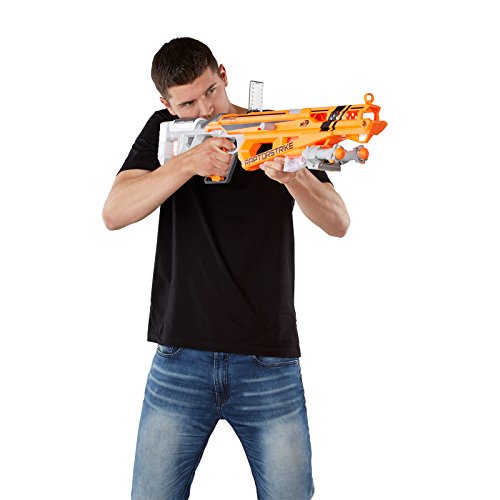 There’s nothing on this gun that appears to pose a problem for functionality or usability!

The Nerf N-Strike Elite AccuStrike RaptorStrike is an excellent long-range for players that value accuracy and control.

Armed with excellent features like a storage shoulder stock, a foldable bipod, and a built-in pop-up scope, you are sure to stay ahead of the competition, whether you choose to camp out and eliminate players as they go by or dive headfirst into the action.

If you want a more accurate blaster that offers plenty of features and an excellent blasting experience, the Nerf N-Strike Elite AccuStrike RaptorStrike will certainly be the right fit for your needs.