There’s something exciting about a good pistol. They’re reliable, they are easy to carry throughout the battlefield, and you don’t have to worry about carrying around a boatload of ammo in order to use them.

However, finding a great pistol that works well for you isn’t always the easiest task, but Nerf does feature a few high-quality, high-performance weapons that are a must-have in your collection.

One of these products is the Nerf N-Strike Elite Mega CycloneShock blaster. To help you understand why this product is something that you need in your weapon stockpile, here is a closer look at the CycloneShock that you need to see if you want this powerful pistol on your side.

With its deep red body (which comes with a camouflage pattern), light gray elements, and just a tinge of orange scattered throughout the blaster, the CycloneShock comes across as a warning sign for any enemy who dares cross your path. 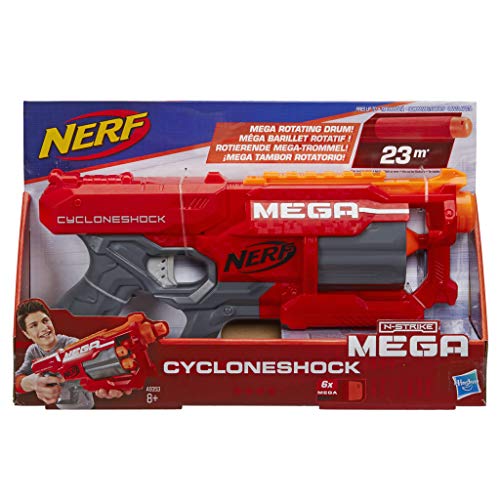 This weapon also beefs up its body by making the rotating barrel appear larger, placing the priming mechanism back a bit farther (which dramatically improves the look for some reason), and connects the handle of the weapon to the rest of the gun.

While the CycloneShock certainly isn’t the largest gun that you will ever come across, this didn’t stop Nerf from making this weapon visually striking, which is very appealing to those who buy blasters for both aesthetic and performance.

As you may have already guessed, the Nerf N-Strike Elite Mega CycloneShock comes with a rotating barrel that comes with enough slots for six Mega series darts. 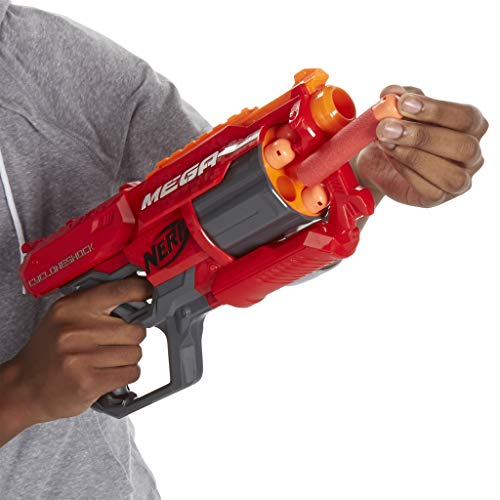 This is common for most of these pistol weapons that Nerf makes, and given its performance and ease-of-use, we believe that this is a fair amount of ammo for this weapon.

However, it is important to remember that this is more of a secondary blaster, not a primary gun for use in battles (unless you are going against enemies who are underpowered).

Much like similar Nerf handguns, the CycloneShock features a priming mechanism at the top of the blaster that you pull back on to prepare the weapon. 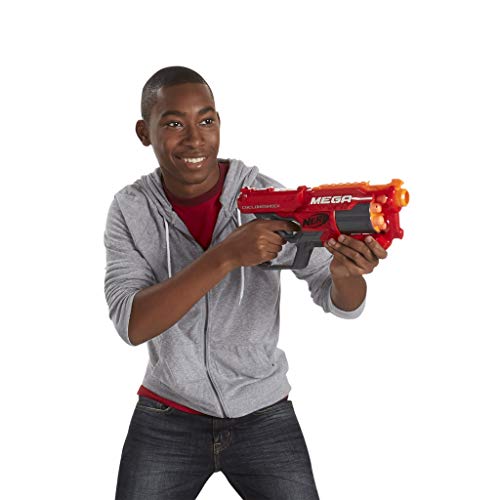 Once your weapon is prepped and fully loaded, all you have to do is pull the trigger and fire your darts. The most impressive aspect of the Nerf N-Strike Elite Mega CycloneShock is the distance that it provides.

No matter where your enemy is on the battlefield, you can send your screaming Mega darts up to 90 feet away. Given the small size of the blaster, this is an excellent range that you can use to your advantage.

Striking Design: While a lot of weapons in the Nerf Mega line have a cartoonish design, this is not true for the CycloneShock. Instead, this weapon takes after some of the new products within the Nerf N-Strike Elite line, offering a camouflage pattern and sharp features that make the blaster stand out against other products.

If you want something that works well and looks better, the Nerf N-Strike Elite Mega CycloneShock blaster is a great choice.

Easy to Use: As we stated in the introduction, pistols are far easier to use than other weapons and this holds true for the CycloneShock. With a rotating barrel that holds six darts at a time and a simple priming mechanism at the top, the CycloneShock is quick to load and use.

Great Firing Distance: 90 feet is impressive, especially when you consider that there are a large number of huge blasters out there that can only reach half that distance. If you want to take your enemies by surprise, the range on this small companion is sure to do it.

Mega Whistler Darts: Mega whistler darts are great for two reasons: they are larger than traditional darts and they scream as they travel through the air, which further confuses and scares your enemy.

Rotating Barrel Doesn’t Pop Out: Other products like this one often feature a small button on the side of the blaster, which allows the rotating barrel to pop out so that you can easily reload your blaster.

Unfortunately, this is not the case for the Nerf N-Strike Elite Mega CycloneShock. While there is enough room on the sides to load your darts in, we wouldn’t necessarily consider it easy access and this is truly the only downside to this weapon that we can come up with.

Everyone needs a secondary blaster that they can depend on when they don’t have time to reload their primary weapon. If you are looking for one of your own, we highly recommend the Nerf N-Strike Elite Mega CycloneShock blaster.

With a compact body capable of holding and firing up to six Mega darts at ranges of up to 90 feet, you are sure to take out your competition with ease.

Overall, while this is a simple blaster, it is a reliable, high-performance weapon that you should have in your arsenal.