Ever heard of the spellbound story of Romeo and Juliet? The story is a powerful reflection of the love between two lovers.

There are arrays of love stories foregrounding the theme of love among couples. Even kids aren't left out in the game of love. They're also in love with something.

Toy guns! The bond between kids and toy guns remains inexplicable. A glance at their ecstasy and energy when playing around with toy guns proves this.

We'll be reviewing of the top pump action guns: Rampage vs the Alpha Trooper both suitable for your kids right here. Ready? Let's move!

To every tough Nerf battle, a tough Nerf warrior and high-grade Nerf gun must be on the ground.

You don't stand much chance of winning mega-sized battles without some heavy ammunition. We put together a very in-depth Rampage review that you can check out.

If your mission has a heavy coverage, Nerf Rampage N-Strike Elite Toy Blaster will give you the power you need.

When it involves matters of high blaster performance, Nerf Rampage N-Strike Elite Toy Blaster is the best in the game.

Heavy Slam Fire action is just at your fingertips with this 25-dart Rampage blaster. Get the 25-dart drum fully loaded with Elite Darts. 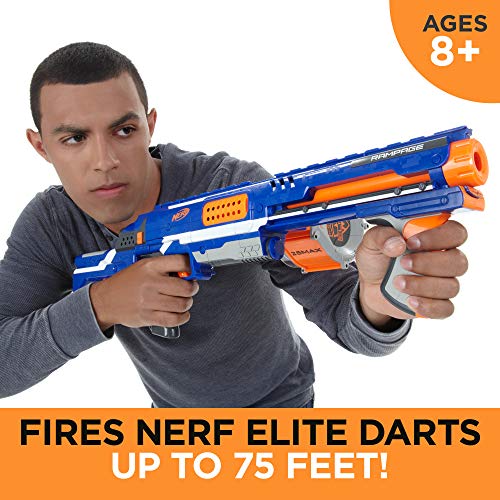 Take aim and take out your targets as fast as you can by sliding the Slam Fire Handle. You'd be launching a wave of darts that'll clip down your targets.

In Nerf battles, exercising power and control over toy guns is of immense importance. This Nerf Rampage blaster gives you control over your rate of fire.

You can unleash a continuous stream of darts by pulling down the trigger and sliding the Slam Fire Handle rapidly back and forth.

For optimized blaster performance, you can use the 25-dart drum to upgrade other Clip System N-Strike blaster.

Each blaster is sold separately, making the upgrade easy and convenient. 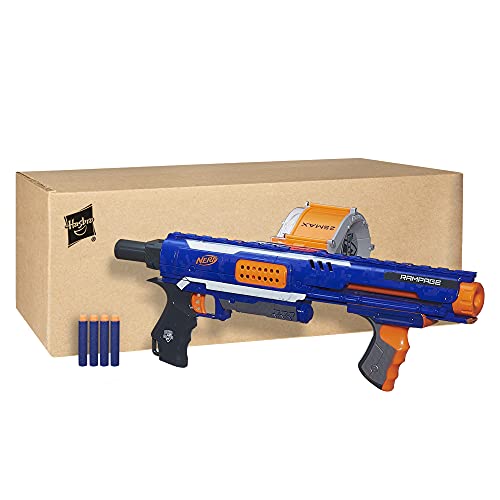 Get prepared for battle with Nerf Rampage N-Strike Elite Toy Blaster. Load up the drum 25 Elite Darts and snap it into the Rampage blaster.

Your rate of firing can be held under complete control with the two firing modes of the gun.

For precision missions, fire one dart at a time. If you want to fight your way out with multiple shots in tight situations, you can unleash a non-stop stream of darts by holding down the trigger and consecutively sliding the Slam Fire Handle back and forth rapidly. 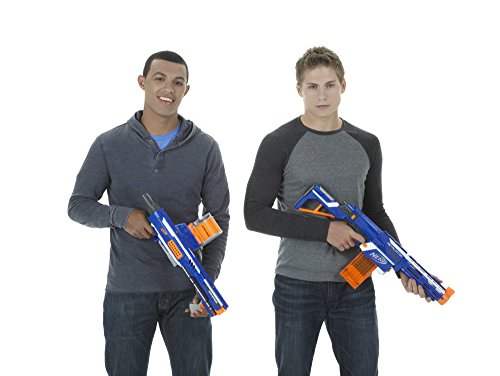 The N-Strike Elite feature of the Rampage blaster gives you the chance to launch an Elite Dart up to 75 feet.

The drum can hold up to 25 Elite Darts which can work with any Clip System N-Strike blaster. With the Slam Fire Handle, you can fire one dart at a time or launch a stream of dart fires.

Caution: To avoid injury, do not aim at the eyes or face. Recommendably, use only NERF official darts with the toy gun. Other darts may not be suitable to meet safety standards.

Do not modify any part of the dart or dart blaster. Some assemblage is required in setting up the toy gun. No tools are needed.

These Nerf blasters were first released in 2013. Both Nerf alpha troopers have a very reliable firing mechanism found in the Retaliator. 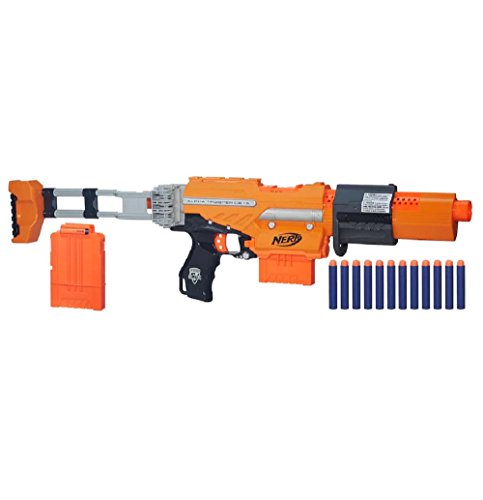 Before the emergence of Alpha trooper CS-12,  the N-Strike Alpha Trooper CS-18 has reigned.

But in 2013, Alpha trooper CS-12 came in to replace Alpha Trooper CS-18. The replacement resulted in the changing of the 18 round drum to a 12 round magazine.

It also changed the reverse plunger system to a direct system that is found in Retaliator.

The evidence of this is shown in the small-sized body of the 6 round magazines. It's the same with the N-Strike.

Furthermore, the stock also comes from the discontinued Spectre REV-5 with designs that point to the fact that Alpha Trooper CS-6 is made from Jolly.

But regardless of these changes, the basic blaster is still very much in shape. 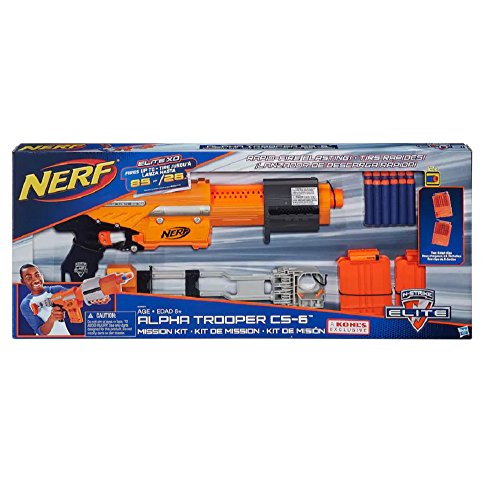 All you need to do is to opt-in for a quick upgrade to the spring and several other bigger magazines to arrive at a basic Nerf Alpha Trooper blaster.

Making the upgrades to fit is very simple. You needn't worry about fitting in some batteries or fiddly motors. You can carry out the fitting task with your screwdriver.

Besides, using a screwdriver is a good start if you've not modded a blaster before.

Getting Started with Alpha Trooper

The CS-6 also features a stock, but it bends when you prime it with your blaster. You can rectify this by using a Worker stock.

It's rated as one of the top pump action Nerf guns on the market. 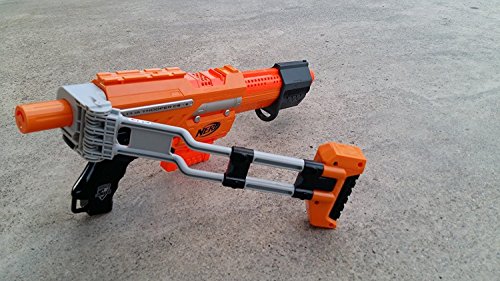 Furthermore, both Alpha Trooper CS-12 and CS-6 don't need batteries. All you need to do is prime it up and fire.

Changing the magazine is quite easy. To change it, pull back the priming handle then hold down the release button and remove the magazine with your other free hand.

Both Alpha Troopers feature release catch on either side, which makes both of them workable for left and right-handers.

The release catch for both Alpha Trooper CS-12 and CS-6 is fit and standard for all magazine-fed Nerf guns.

Once you have the magazine set in, pull the priming handle back, then push it forward and you're ready to start the game!

The barrel has no attachment, but there's really not much need for it. The stock attachment point is located at the rear side. Just across the top are the tactical rail and the jam door. 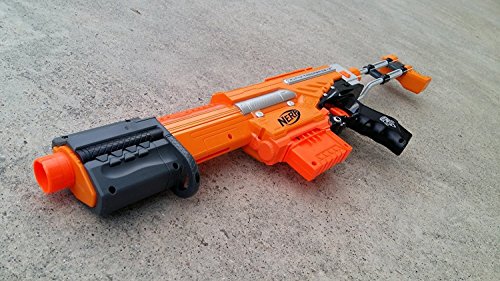 If you want to free any stuck dart, you can open the tactical rail and jam door to free the stuck darts.

Outside the box, Alpha Trooper is light, weighing just two pounds with just 19.7 inches long. These features make the gun easy to carry about anywhere and at any time.

Furthermore, it has a comfortable and nice grip. The prime handle is designed with a lip which makes the gun easy to pull with little grip force required.

The trigger also has a nice touch and feel. There's a sling mounting on the bottom of the grip coupled with slot to hold an extra dart... just in case you need it in tight situations. 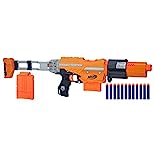 Nothing feels thrilling than emerging as the champion of Nerf battles. The grand feeling makes you feel right on top of the universe! Boost your chances of winning with Nerf toy guns reviewed here.

Nerf toy gun products are great items to make your kids happy. Get them Nerf Rampage and Alpha Trooper Nerf guns for a maximum fun experience!