Yes, manual, one shot at a time blasters are all well and good. But you know what is truly terrific?

A battery-powered, flywheel semiautomatic blaster that pumps ball after ball out at a speed of around 89 feet per second.

If nerf battling had an OP weapon, this is it. Introducing the Nerf Rival Zeus

Here's is another beautiful blaster produced by Hasbro. It shoots out balls instead of darts or discs. On trial, I noticed the balls were going so fast that they appeared to blur on the replay. Even the Nerf Wiki lauds the precision and power of the Rival Zeus.

This high powered weapon could come in handy in serious nerf battles where you could use it to unleash multiple shots on your opponent before he even becomes aware of what is going on.

The aerodynamic nature of the balls is not so efficient, so if you are nerf battling in the Great Outdoors, you may not see the Nerf Rival Zeus at its best as a large number of your shots may be swerved away by the wind.

However, in an indoor fight where there are no stray winds, the Rival Zeus truly begins to shine, dominating battlefields with its rapid rate of fire and high projectile speed.

Stay with me as we go through all that makes the Nerf Rival Zeus tick. By the time we're done with our tour, you will have made up your mind on whether the Zeus is worth buying or not.

A blaster proper, two detachable technical rails, a magazine, a few balls, and instructions are all contained within the packaging of the Nerf Rival Zeus. Let's go through them.

This ensures that the blaster balances properly when being held instead of being a little too top heavy or too bottom heavy. More often than not, proper balance is key to victory in nerf battles. 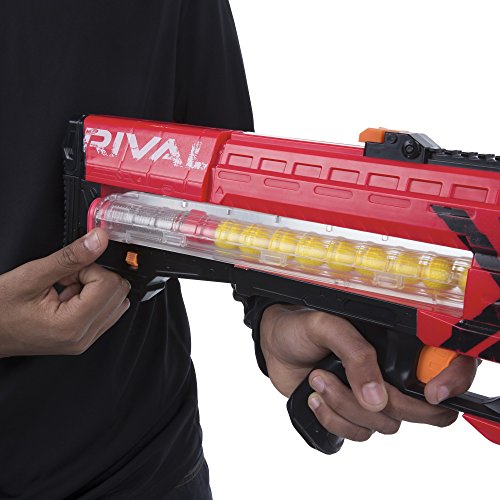 Barrel: The barrel of the Rival Zeus is a big affair with a bore wide enough to accommodate the caliber of the balls that it shoots. The barrel does not have any areas for attachment and as such, you won't be able to attach barrel extensions.

Right there, along the top of the barrel, there is a flip-up sight which you can use to improve your accuracy while aiming.

Grip: The grip of the Nerf Rival Zeus is actually quite comfortable. I was able to hold onto it for hours of play with nothing but the mildest aches in my palm.

The grip is designed in such a way that despite being easy for a child to wrap his hand around it, it is also long enough to be comfortable when being wielded by an adult. When you combine this with the general stability of the blaster, it makes the Rival Zeus a very comfortable nerf gun to wield. 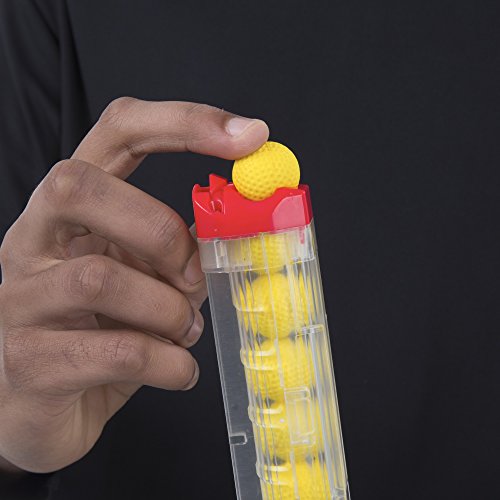 These rails allow you to equip accessories such as scopes that will take your nerf game to the next level.

Trigger: Since the Nerf Rival Zeus is semiautomatic and not automatic, you have to press the trigger once for every shot released. The trigger is easy on the fingers and does not cause any strain or pain even after long hours of usage.

Prime the vortex series of Nerf guns, the trigger on the Rival Zeus is located a little bit more anteriorly, and I'm not sure if this is an advantage in some way.

Rev trigger: The Nerf Rival Zeus is powered by batteries, and as such, the trigger will refuse to click until the rev trigger is pressed.

Press and hold down the rev trigger in order to activate the batteries, this will immediately rev up the flywheels. Once this is done, clicking the trigger is going to cause balls to be shot out of the barrel. 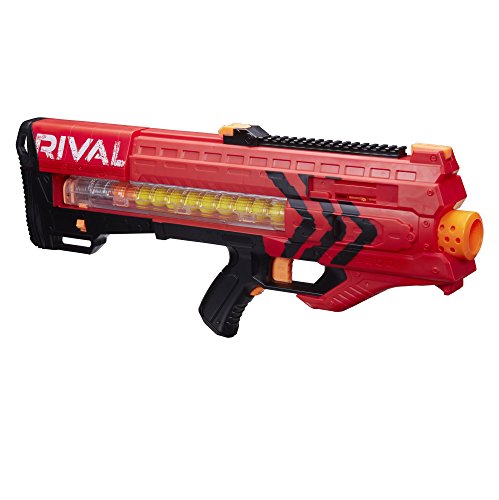 Magazine release button: It is located on both sides of the blaster. When pressed down, it allows the magazine to be extracted from the groove in the middle of the blaster where it was inserted. A little too clumsy if you ask me. 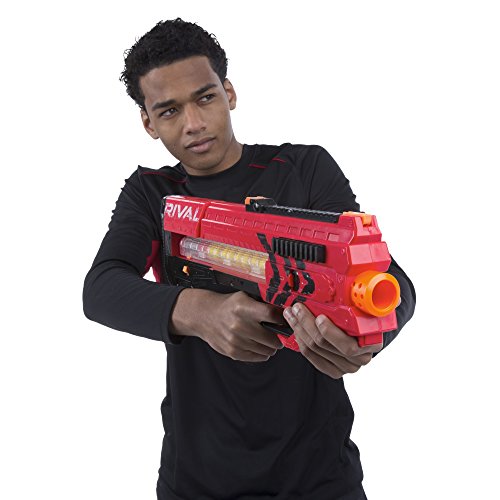 How to use the Blaster:

The first step in using the Nerf Rival Zeus is loading the magazine. The magazine is loaded with balls that serve as ammo. The balls are loaded sequentially, one after another. A magazine contains about fifteen balls. After loading is complete, the next step is to insert the magazine.

Once the magazine is properly loaded, you can then attach the two tactical rails on top of the barrel. You can also add any accessories you need to improve your shooting.

The next step is for you to stand, hold the nerf gun in a comfortable position, and aim at your target. To shoot at your target, press and hold down the rev trigger. This will activate the batteries and start up the flywheels that generate thrust for the projectiles. 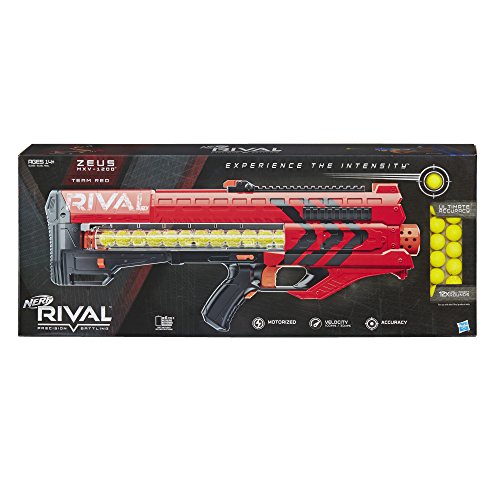 After this, tap the trigger as fast as you can to release projectiles at a blinding speed. The faster you tap the trigger, the faster the balls are shot out provided that you are holding the rev trigger.

This maneuver may require both hands, one to steady the blaster, and one to actually push the magazine out.

Refill the magazine with balls, reinsert the magazine into the central groove, press down the rev button, then click the trigger and unleash waves upon waves of fast-moving balls. See here for video details on how best to use the Rival Zeus. 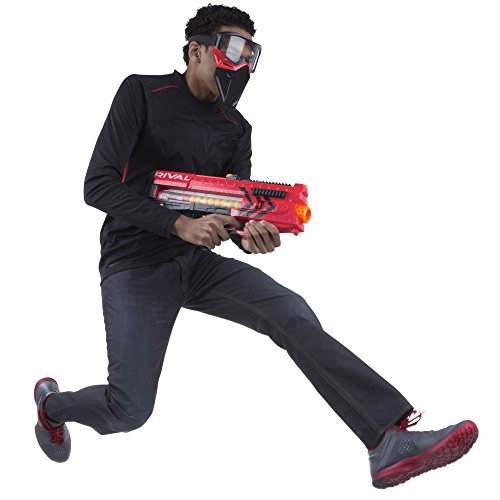 Lock: There's a lock to ensure that you can't pull the trigger if the rev trigger is not depressed. It makes sense as, without the rev trigger, there is no power to propel the ball

Full ambi: All the knobs and buttons on the Nerf Rival Zeus (except the safety lever) are located on both the right and left sides of the blaster. A truly ambidextrous toy.

Clip-on rails: The tactical rails on the top of the barrel are a little bit different from the standard tactical rails. You cannot slide accessories onto them. Instead, any accessory you want to use will have to be clipped in on the technical rail.

In all, this bad boy packs quite a punch. A lot of velocities, very comfortable grips and excellent balance, a little trouble in reloading, and a king in indoor battles. Overall, I'd say it's a decent buy