Our final entry in this series, the Nerf Ultra Amp is an excellent compact weapon to carry around if you want an easy-to-use, formidable weapon that you can operate without fail.

But when it comes to this final entry, does it stack up to some of the other blasters that we’ve covered so far, and is it one that features far fewer disadvantages in comparison to similar blasters in this line and outside of it?

If you’re interested in the Nerf Ultra Amp, let’s take a closer look at what it is and what it has to offer when it’s put into play in our Youtube video below.

The Nerf Ultra Amp sticks to its guns and maintains the color scheme characteristic of the series, sporting a ghost white and Nerf orange design with a golden “ULTRA” logo on the side of the blaster. 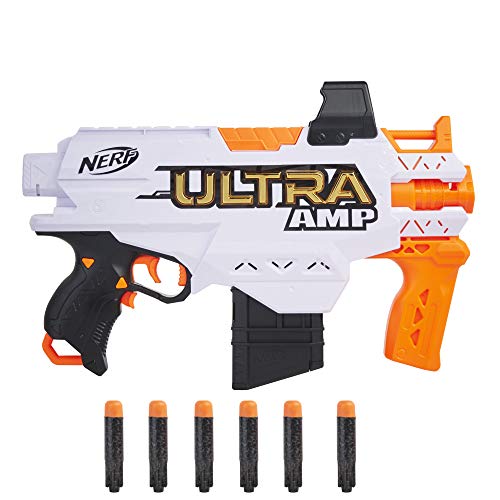 As we’ve stated, this is a very compact gun for a motorized blaster, making it easy to carry around on the battlefield despite the fact that it holds six AA batteries.

If you know someone who has been on the hunt for a light, powerful blaster that they can use in their Nerf battles, the Nerf Ultra Amp is an excellent contender!

Similar to other motorized handguns throughout the Nerf series, the Nerf Ultra Amp is capable of carrying up to six darts at a time in its clip system.

Much like it is with the rest of the series, the Nerf Ultra Amp uses Nerf Ultra darts that have an innovative flight tip, aerofin technology, and lightweight foam to help the darts travel further when they’re fired.

The clip system is also a joy to use as all you have to do is load it, pop it in, and pull it out to reload it. No messing with buttons to get this clip system out!

The Nerf Ultra Amp is semi-automatic. To operate it, simply hold down on the acceleration trigger located directly beneath the main trigger and fire at will! 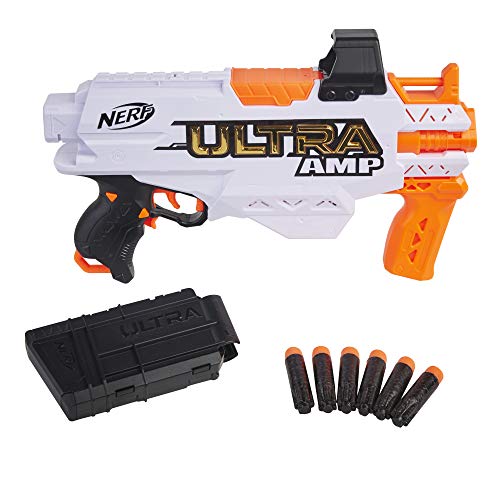 Once you fire, you can tell that this blaster is definitely powerful, which is representative of the Nerf Ultra Series increased distance of 120-feet per shot.

We’ll talk more about whether or not this blaster reaches that distance once we dive into our full series comparison article next time!

There are a few minor additional features on this blaster worth noting. These include: 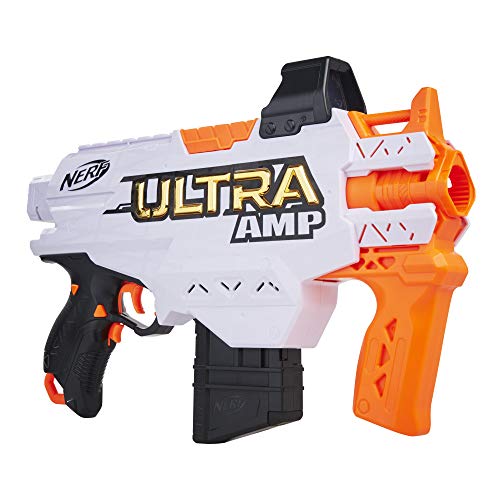 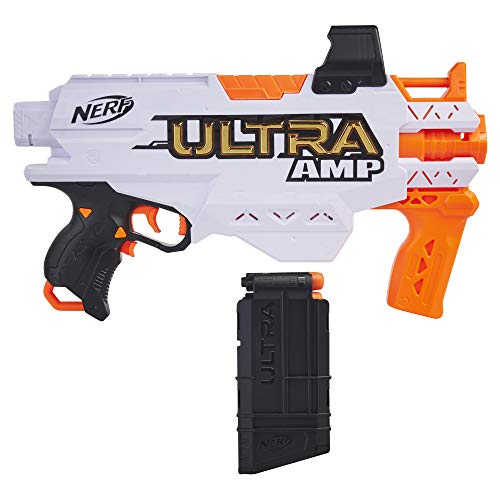 There’s nothing wrong with this blaster that we could find, making it one of the most solid weapons on our list.

However, the only thing to note is that this blaster does take batteries. Buying batteries for Nerf weapons over time can be quite expensive, and Nerf blasters may lose some of their power and efficiency as they lose battery power.

Additionally, if you’re in the middle of a battle and you don’t have an extra blaster to rely on when you’re batteries die, you’re out of luck.

This is just one thing to keep in mind that could be considered a disadvantage of all motorized blasters.

How far does a Nerf ultra amp shoot?

The Nerf Amp shoots almost 120 feet on new, fresh batteries. On average, you should expect to shoot 75-95 feet.

The Nerf Ultra Amp blaster features motorized dart blasting so you can fire darts fast! It does require batteries and they are not included in the packaging. Nerf Ultra darts are the farthest flying Nerf darts and feature the innovative flight tip, Aerofin technology, and dense Nerf Ultra foam. Nerf Ultra blasters can only use Nerf Ultra darts.

So, what do we think of the Nerf Ultra Amp? Overall, it’s an excellent weapon that almost any age group could use.

With a quick motor, an easy clip system, and plenty of extra features to help you get the most out of this weapon, the Nerf Ultra Amp is a great weapon to turn to for any Nerf battle.

Love the Ultra Amp? Here are a few more reviews:

6 of the Rarest Nerf Guns You Will Ever Find