Almost every line has a smaller, lower-capacity blaster that helps introduce younger Nerf enthusiasts to the world of Nerf. So far, we have only encountered primary and secondary weapons throughout the Nerf Ultra Series.

Fortunately, the fourth entry in our series, the Nerf Ultra Four, will introduce you to a weapon that is more appropriate for younger players.

If the Nerf Ultra Four has caught your eye, let’s take a closer look at this blaster and what you should know before you decide to buy it for the Nerf enthusiast close to you!

Looking for a Nerf blaster that is extremely lightweight and compact?

The Nerf Ultra Four is a slim, light blaster that features the ghost white and Nerf orange color scheme (along with the golden “ULTRA”) that we have come to know and love throughout this series. 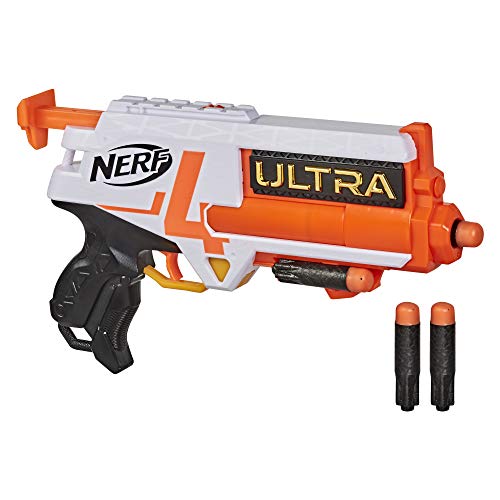 New Ultra Four Review: Because the design is so tight, this blaster looks a lot cleaner than some of the other blasters in this series, making it a great option for those who are interested in the aesthetic appeal of their blaster as well.

Overall, the Nerf Ultra Four is an excellent choice for those who want a blaster with both great functionality and a striking design as well.

The ammo capacity on this blaster can either be seen as an advantage or a disadvantage. The Nerf Ultra Four is indeed a one-shot blaster. 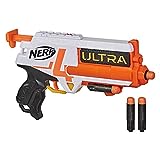 For those who need a stealthy secondary (in comparison to the noisier Nerf Ultra Two) or for younger children, this can be an excellent feature that makes the weapon worth purchasing.

For players who are only interested in firepower, however, this may be an option that’s off the table. As it is with its counterparts, the Nerf Ultra Four utilizes unique darts that include lightweight foam, an innovative dart tip, and aerofin technology to help the darts fly further on their journey.

The Nerf Ultra Four is a manual weapon that is very easy to prime and operate. Simply pull back on the priming mechanism at the back of the blaster until you hear a click then fire at will! 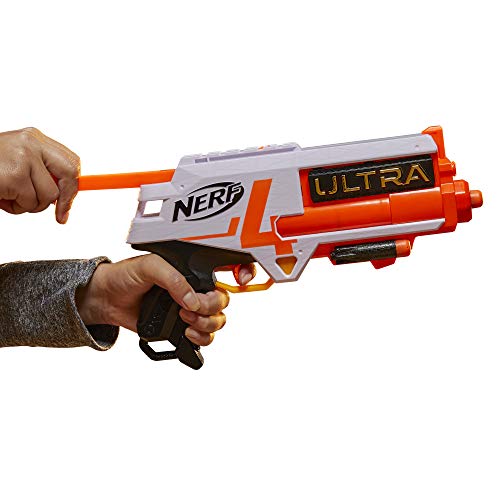 While the Nerf Ultra line advertises a 120-foot range (and some of the blaster options do not always fulfill this range), the power on this blaster is surprising and you will definitely get some distance when you finally try it out.

Nerf says the Ultra line is the farthest flying Nerf blaster but I would argue otherwise.

As a stealth weapon, this makes the Nerf Ultra Four a powerful blaster to have on your side! 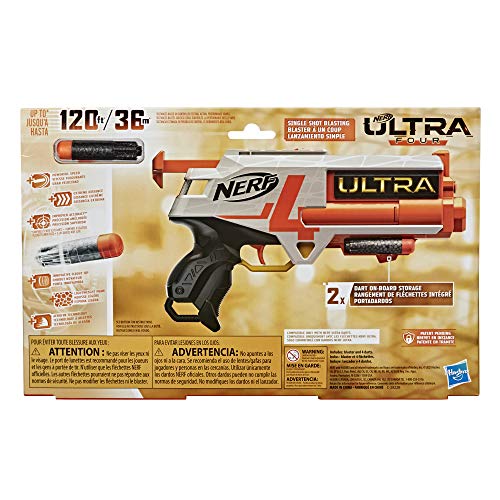 There is one noteworthy feature on the Nerf Ultra Four, and that is the additional ammo storage located on either side of the main barrel. Single-shot blasters can be tricky because you have to hold onto all of your ammo so that you can reload your blaster throughout the game.

Fortunately, the Nerf Ultra Four includes space for two extra darts so that you have extra to rely on should you need them. There’s also a tactical rail at the top of this blaster if you want to equip it with any specialized scopes. 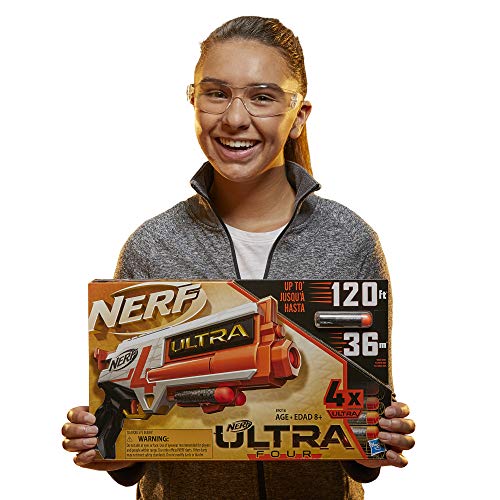 The only thing we want to mention isn’t a dislike but a warning. The Nerf Ultra Four is one of those blasters that must be prepared carefully as not doing so can result in malfunctions that make using the gun an undesirable experience. 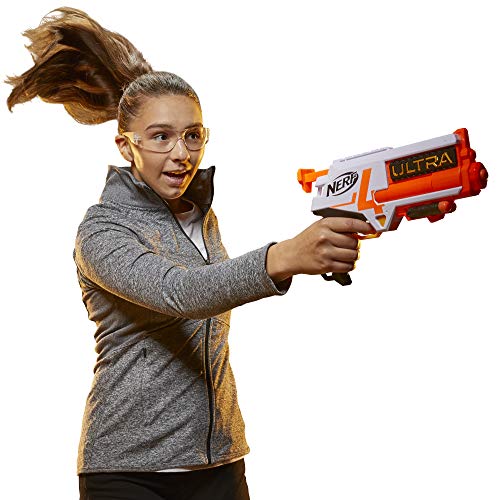 When you prepare the Nerf Ultra Four, it’s important that you push the dart in all the way and avoid pointing it too low at the ground as doing so may loosen the dart, which causes the blaster to fail to launch the dart at all.

Additionally, when you first prime your weapon, the dart may push out a little as a result. Just make sure to adjust it before you fire and you should have few problems working the Nerf ultra Four.

Besides this minor issue, the Nerf Ultra Four is an excellent blaster for Nerf enthusiasts of all ages!

Not all Nerf blasters are friendly for all ages, which is why it’s important to look for certain blasters that are easier for younger users to play with.

Fortunately, the Nerf Ultra Four is that blaster!

With a lightweight, compact build, easy operation, and plenty of features to keep children occupied (or help older users in need of a stealth weapon get more out of this single-shot blaster), the Four is a blaster that we recommend for parents everywhere who want to start introducing their children to Nerf!