When it comes to Nerf, there’s no shortage of excellent blasters to choose from. Whether you’re looking for foundational weapons like those offered in the Nerf N-Strike Elite Series to build your arsenal to more high-impact weapons like those hailing from the Nerf Rival Series, there are endless blasters that offer the performance and functionality that you need to succeed in any battle.

Nerf Ultra One Review: What I LOVE about #1

That being said, any new line that comes into the Nerf franchise deserves coverage, especially if it’s boasted as being a premium blaster that can offer even greater performance than some of the existing lines that we’ve come to know and love.

If you’ve been looking for a new blaster to gift the Nerf enthusiast in your life, let’s take a closer look at the Nerf Ultra One to see whether or not it deserves the hype!

We filmed our video highlighting what we like, don't like and what are some cool features about the Nerf Ultra One - one of my favorite Nerf gun reviews.

The Ultra One is a clear competitor right out of the box. The Nerf Ultra line sports an attractive ghost white and burnt orange color combination that is attractive to look at. 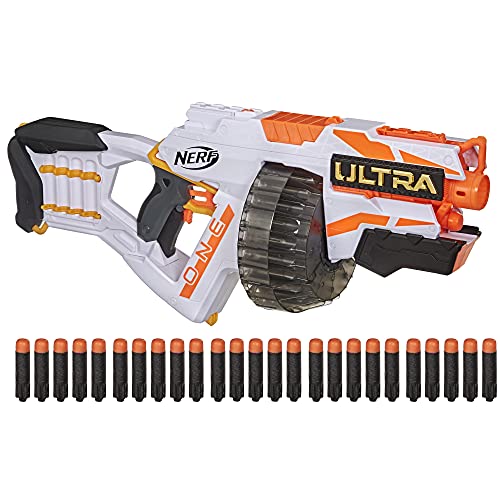 As you can expect, you’ll also find multiple branding logos throughout the body, with the most appealing aspect of this design being the gold-plated “Ultra” on the front of the blaster.

Speaking to this specific blaster, the first entry in the Nerf Ultra series is a relatively large blaster that is perfect for anyone in need of a primary weapon for their Nerf battles.

Put simply, the Nerf Ultra One looks fantastic and is an excellent introduction to this new, more powerful series.

Given the sheer size of this blaster, one could assume that this weapon could store a great deal of ammo, and they would absolutely be correct. The Nerf Ultra One comes with a 25-dart rotating drum that gives you plenty of ammo to take on the competition.

Although this ammo capacity is by no means a new entry into the series, the ammo on this blaster is what truly stands out when you begin prepping your weapon.

Rather than modeling their darts after the darts that you see in all of their other lines, the darts in the Nerf Ultra series feature an innovative flight tip, a lighter foam body, and aero fin technology to help the darts cope with the improved power offered by this blaster.

Once you’ve loaded it up, you’re ready to start the fun!

The best thing about the Nerf's Ultra One is that it’s not manual. Instead, you can activate this motorized blaster by holding onto the acceleration trigger located just below the firing trigger and shooting at will.

This provides you with full control over your blasting experience while also making it far easier to operate your blaster. 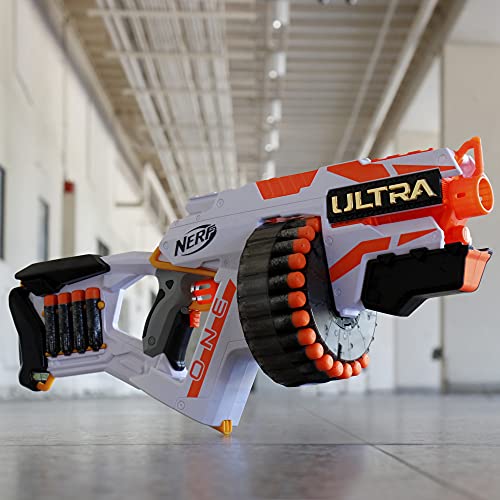 The reason why the Nerf Ultra Series is believed to offer a more premium and high-quality experience is due to the fact that it has a considerably longer range in comparison to other blasters in their existing lines.

This blaster boasts a 120-feet distance rather than the typical 75 feet or 90 feet. Although we didn’t see our darts fly quite that far, they still offered a great distance that would prove useful in the heat of battle.

This gun is relatively basic, which lends itself to its ease-of-use. However, there is one additional feature that can be a lifesaver if you find yourself cornered and out of ammo.

On the right-hand side of the blaster, you’ll find that there’s a small spot for a few rounds of ammo that you can access if you are in desperate need of it.

Although it won’t be able to replenish your whole drum, this can make a major difference between being hit and staying in the game.

Large Ammo Capacity: Having more ammo in your primary weapon is an advantage in any Nerf battle. Fortunately, the Nerf Ultra One comes with 25 rounds to help you take out your competition with ease. 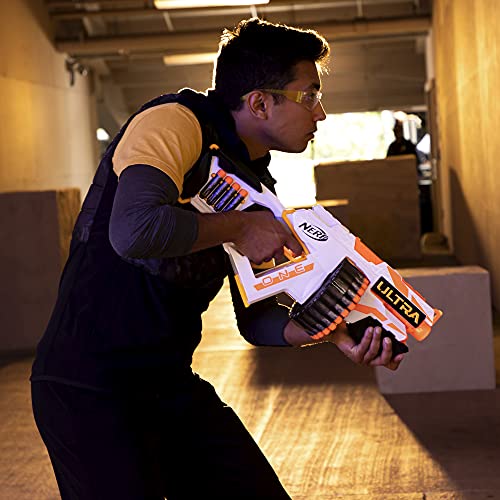 Storage Space for Extra Ammo: Despite the fact that it’s not 25 extra rounds, we find the small ammo storage section on the shoulder of the gun to be quite helpful in emergencies. You never know when you’re going to need it!

Motorized Blasting Experience: Manual weapons can be difficult to prime and operate, especially when they’re a bit heavier and bulkier like the Nerf Ultra One. That being said, older children will have no problem operating this blaster while taking advantage of the motorized blasting experience that comes with it.

Doesn’t Quite Reach Its Advertised Distance: The biggest selling point of the Nerf Ultra line is that it has a much larger distance than other blasters that are currently on the market. Unfortunately, we found that the Nerf Ultra One doesn’t quite reach 120-feet. However, it still fires pretty far, so you shouldn’t let the decreased distance prevent you from trying out this new weapon. 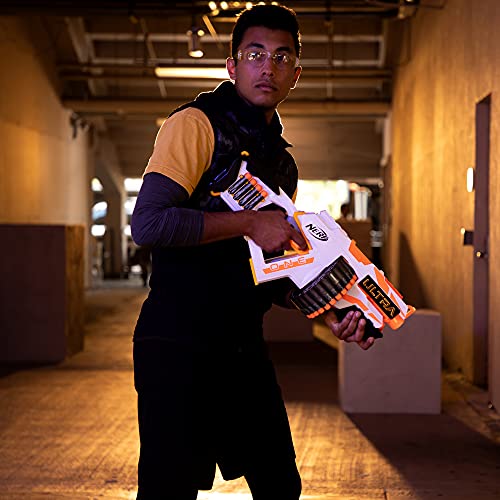 Drum Was Difficult to Put On: While it’s not a dislike, we should mention that it did take some time to put the drum onto this blaster. Know that there is some assembly required and you will have to work on it a bit before your child can play with it!

Takes a Long Time to Reload: Weapons without clip systems and large ammo supplies are great until it comes time to reload. Anticipate having to hide behind a large object while you get all 25 darts into here. Additionally, it’s important to know that the darts must be perfectly in their slots or the gun will jam. This blaster is a bit finicky during operation!

What is the strongest ultra Nerf gun?

Is the NERF ultra one worth it?

The Ultra One is a ton of fun but has a few drawbacks. It has an excellent range and is considerably more accurate than other Nerf blasters. However, it is a bit heavy and takes a large amoutn of batteries.

Nerf Ultra blasters are one of the newest Nerf lines. These blasters are known for packing a more powerful shot, better accuracy, and a further distance shot than most earlier Nerf blaster models. These blasters are considerably larger than comparable blasters. Half of the Ultra line requires batteries and the other have do not.

Our Verdict - Nerf Ultra One Review

It’s always exciting to see a new line of blasters come out, and chances are that the Nerf enthusiast you know has already taken notice of the Nerf Ultra Series. Overall a great value with a ton of 5-star reviews.

Overall, the first entry in this line is built fairly well. With plenty of ammo, extra storage space, and motorized operation (paired with a fair firing distance), the Nerf Ultra One blaster is something you should consider gifting to a user looking to try something new!