Every Nerf enthusiast needs to have a handgun in their arsenal. Why? Without a secondary weapon on hand, things can get messy in the middle of a Nerf battle should they run out of ammo in their primary weapon.

That being said, having a high-quality secondary blaster on their side is of the utmost importance.

In this review guide, we’re going to take a look at the new Nerf Ultra Two to see whether or not it’s a Nerf handgun worth having at their side.

To give you great insight, here is our video of unboxing sharing our pros/cons of the Nerf Ultra Two.

The Ultra Two is just as attractive as the Nerf Ultra One..... scratch that, the Ultra two is a bad-ass pistol offering a compact body that seamlessly blends ghost white and classic orange together for a smooth feel. 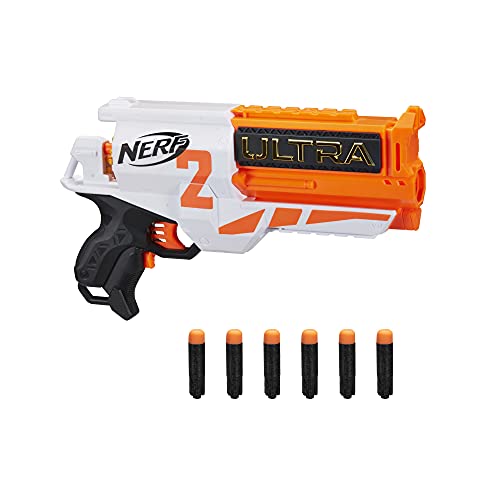 Of course, the highlight of this blaster and of all of the blasters in the Nerf Ultra series is the golden “ULTRA” you’ll find stationed at the front of the blaster.

This blaster is a little heavier because it takes 6 AA batteries for operation, so this is something to keep in mind if you were potentially considering this blaster for a younger family member.

Overall, the Ultra Two is another entry in this series that has a great design worth the buy!

Because this blaster does fall into the “handgun” category, you’ll find that it offers room for six darts in its body, which is ample for those who need a secondary weapon to carry around with them on the battlefield.

You’ll immediately take notice of the fact that Nerf Ultra darts offer a unique style that you won’t find in other Nerf series, with aerofin technology, an innovative flight tip, and lightweight foam that is designed to help your shots achieve the range and impact you anticipate receiving when you fire this blaster.

These darts are better than the Elite Darts as they are more durable, sturdy and pack a harder punch.  These Nerf Ultra darts are designed different are 7 grams heavier than traditional Nerf darts.

If you need a secondary weapon, the Ultra Two is certainly a candidate in this area.

The firing style and range are where the Nerf Ultra Two stands out from most other handguns.

Rather than a manual firing style, the Ultra Two uses an acceleration trigger located just beneath the firing trigger to help you deliver your darts more effectively. 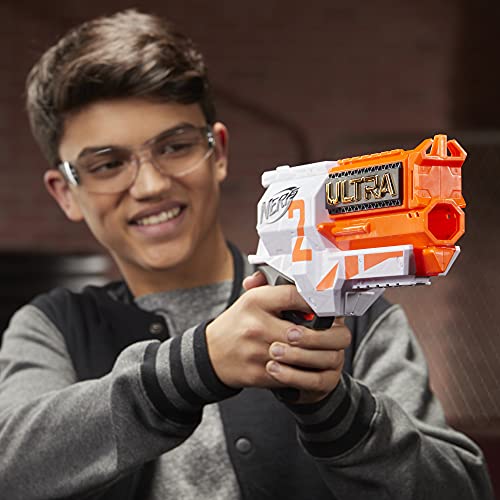 Additionally, the Nerf Ultra blasters boast an impressive 120-foot distance, making it far more effective than some of the handguns you may be considering in the Nerf N-Strike Elite Series.

Put simply, if you want a blaster that’s easier to handle and offers greater power, this is a great option to put into battle. 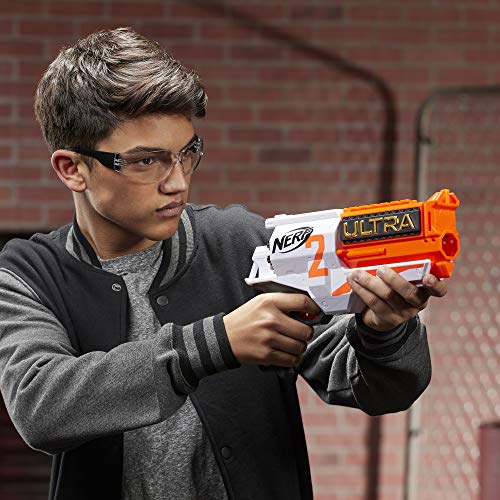 There are a couple of major features on this blaster that makes it stand out almost immediately. These include:

Internal, Back-Loading Rotating Barrel: The biggest issue with a lot of Nerf handguns is that they only load from the front. Despite additional features that make front-loading easier for users, loading your blaster from the front can take time and leave you open to enemies in the process.

Rather than taking this route, the Ultra Two offers an exposed barrel in the back that you can seamlessly feed your darts into.

This makes it easier to reload on the go and reduces the chances that you’ll be hit while reloading or experiencing a great deal of difficulty throughout the reloading in the process. If you’re not happy with the location of the rotating barrels on other handguns, you’ll find that the Nerf Ultra Two easily fixes these issues by simply opening up the barrel through the back of the blaster instead. 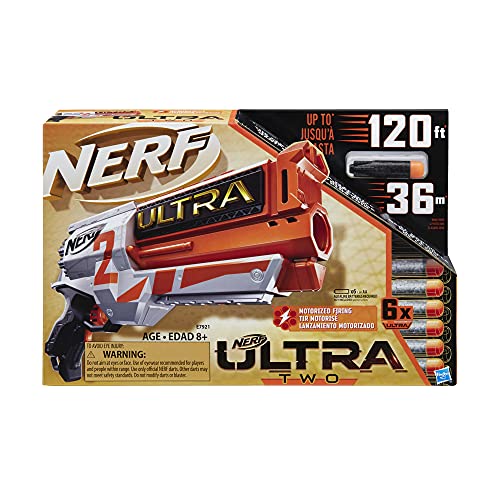 Jam Door on Side of Blaster: Of course, with the internal loading process comes the potential for jams (which we’ll be discussing further in this review). Trying to undo these jams in a blaster without a jam door can leave your darts unusable and your blaster temporarily out of commission.

The good news is that Nerf considered this issue and provided a jam door on the side of the blaster so that you can get out any lodged darts should they become a problem during use.

While these features may not be major, they do help with this blaster’s functionality so that it’s a more viable handgun option for those who need one.

Enhanced Distance: Nerf’s choice to make this line of blasters shoot further makes this line extremely valuable for use in any environment. With 120 feet of distance to hit your targets, this blaster is perfect for those who like to play indoors and outdoors.

Easy Reloading Process: No more having to struggle to get the darts in the front of the blaster, prepare it, and go through the process all over again once you run out of darts. Instead, keep extra darts on you and easily feed them into the open-backed rotating barrel once it comes time to reload. You’ll find this feature to be extremely helpful!

Greater Accuracy: Greater power means greater accuracy, especially when you’re getting close and personal with enemies. If you’re not getting the accuracy you want out of other handguns in your collection, you’ll find this blaster to be the solution to your accuracy woes.

Ease-of-Use: Ease-of-use is largely subjective. However, we believe that this applies to the Nerf Ultra Two given its range of features designed for simpler use. With a motorized trigger, a back-loading rotating barrel, and a jam door, you have everything you need to operate the Nerf Ultra Two with ease.

Has a Reputation for Jamming: The biggest issue with this blaster is that it has the reputation for jamming. Even in our tests, not every dart fired out successfully, which can be a major problem in the middle of a Nerf battle. That being said, jamming can sometimes be indicative of a problem with use as well. If you find yourself having extreme issues with the blaster, remember to operate it as carefully as possible.

Load your darts in carefully, hold the motorized trigger down before you begin shooting, and do your best to keep your darts in good condition. The darts in the Nerf Ultra Series have also received their fair share of complaints, so this is another thing to keep in mind if you’re considering trying out this blaster.

Much Noisier Than Expected: Most Nerf users are aware that motorized blasters make noise. However, the Nerf Ultra Two is quite noisy, making it difficult to conduct sneak attacks and also making it more likely to drive parents up the wall. This is another point of consideration for the Nerf Ultra Two.

Requires a Lot of Batteries for Operation: Batteries are expensive, and most Nerf users will often find themselves spending at least the cost of the blaster, if not more, in batteries throughout its use. If you’re not looking to have ample AA’s on hand to operate this blaster, this another thing to note.

So, what do we think of the Nerf Ultra Two? Overall, it’s an excellent handgun to own if you’re interested in the Nerf series. It is a worth the price and a good value.

It is a top five selected Nerf Ultra blaster due to the size, ease of use and price.

However, it does come with its fair share of challenges, such as the known jamming issues, the issues with the bullets, and the noisy, motorized aspect of the blaster.

However, if you’re willing to overlook these issues, you may be pleasantly surprised by the Nerf Ultra Two.