If you’ve ever watched a zombie movie or played a zombie game, you know that firepower is everything. The more ammo that you have, the better your chances of survival, especially if you are facing off against an army of the undead.

This means that finding a weapon that can provide you with a large ammo capacity is of the utmost importance if you plan on surviving any brain-eating creature that may come your way.

While the Zombie Strike series comes with a number of unique weapons that offer a great blasting experience, you are still going to need a primary blaster that can handle the pressures of post-apocalyptic life in your zombie landscape.

One great weapon that fits the bill? The Nerf Zombie Strike Ripchain Combat blaster is definitely one of those primary weapons within the series that can do some damage.

To make sure that this is the right weapon for your zombie-blasting experience, let’s break this weapon down and get right to the performance!

While this is a much different blaster than you may be accustomed to, it doesn’t change itself in terms of the style and design that you expect from the Nerf Zombie Strike series. 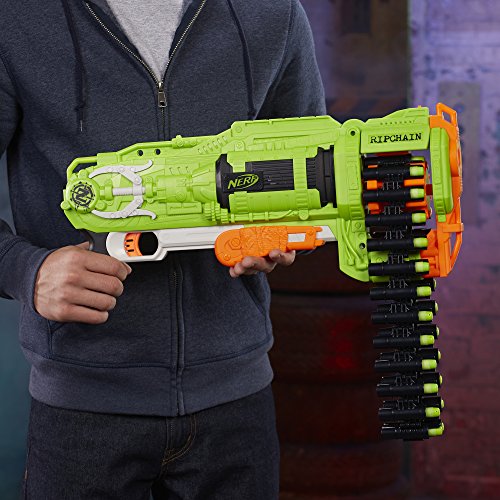 With flashing green and orange colors, it is instantly clear that this is a gun designed for the zombie apocalypse. This blaster also takes to a more mechanical design instead of the grittier feel that we get from some other Nerf Zombie Strike weapons.

Overall, the Nerf Zombie Strike Ripchain Combat blaster is average in the looks department. Its true appeal lies in some of the other features of the weapon, which we will cover in-depth as you navigate this review.

While the design seems a bit lackluster for a Zombie Strike weapon, the ammo capacity on the Ripchain is where it has the chance to shine. 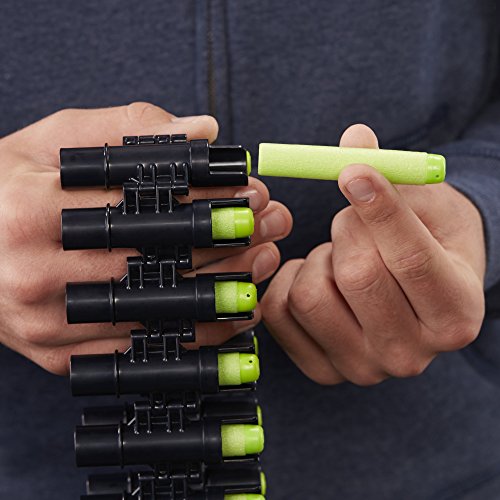 No matter who you may find yourself standing against, this large ammo capacity will allow you to take down your enemies with confidence.

Often, the next question is, how does this blaster manage to squeeze so many darts into its body when it has a manual firing style? Well, let’s take a look!

Before we dive into exactly how the Nerf Zombie Strike Ripchain Combat blaster launches its darts, it’s important that we discuss exactly how this weapon holds onto its ammo. 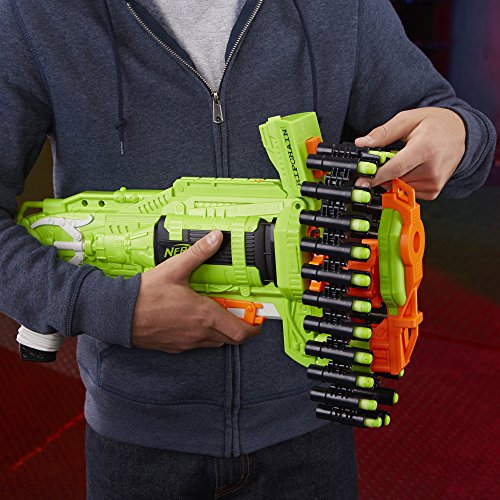 Rather than using a rotating barrel as we have seen in other offerings or providing us with a drum or clip system, the Ripchain uses a 25-dart chain that is inserted into the front of the gun by flipping a small section back and placing the chain in.

Once it is secured, you use the pump-action mechanism below to prime your weapon, pulling the trigger once you have your sights set on your enemy.This blaster also has a pretty decent distance, with darts reaching 60 to 70 feet when fired.

Overall, this is a solid weapon to fire at any opponents or zombies who may be taking a stand against you

Being easy to carry around, containing enough space to make sure that you have plenty of ammo to carry into battle, and easy to load into your weapon, this is just a great all-around feature that you are going to be hard-pressed to find on other blasters.

Unique Blasting Experience: The chain feature on a Nerf blaster isn’t a common addition, which makes for a unique blasting experience when you do happen to get your hands on a gun with a chain.

If you want something that will rock your world and scare off your enemies, the Nerf Zombie Strike Ripchain Combat blaster is a great gun.

Great Range on Blaster: More often than not, the ranges on themed-series seem to be lacking. Fortunately, the Ripchain comes with a decent range of 60 to 70 feet, which allows you to engage in close, mid, and long-range combat with those around you.

Given that most of our reviews for this series turned up mid-range weapons, this is a diamond in the rough. 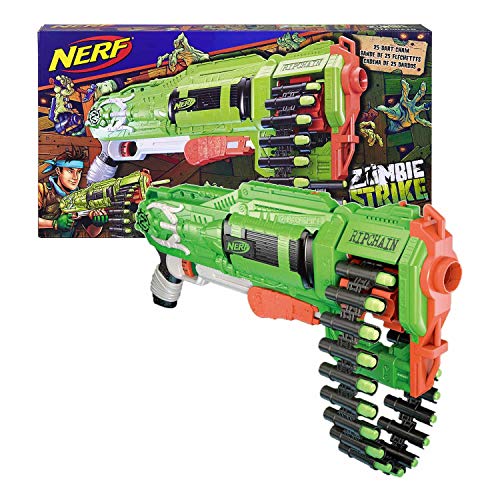 Easy to Load: The more ammo you have, the harder it is to load that ammo into your weapon unless they have included a clip system or drum to help you reload your weapon.

Although the chain on this weapon may not be for everyone, loading it into the front of your weapon is undeniably easy. This is a definite plus for those who need quick access to their primary blaster.

Excellent Mix of Power and Control: The biggest issue with automatic weapons is that you don’t always have the control that you want. It can be easy to go through all of your bullets in one sitting, leaving you vulnerable to any attacks until you can replenish your ammo supply. With the Nerf Zombie Strike Ripchain Combat blaster, however, you get full control over your 25 darts.

Slam-Fire Action for When Things Get Tough: The good news about this weapon is that it does come with slam-fire capabilities, which allows you to rapid fire your darts as fast as you possibly can when you are in imminent danger. Just remember to keep track of how many you have left! 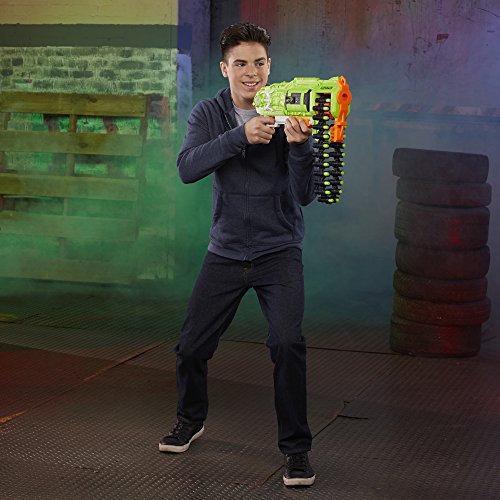 Can Be Difficult to Reload: While the ammo chain is easy to load into the weapon, the act of loading all 25 darts back into their original positions isn’t always the easiest.

Of course, this depends on how well you are able to handle this system and whether or not you have other chains waiting on the sidelines. Ultimately, this isn’t an issue with the gun itself but something that you should consider if you are looking to buy it.

May Be Awkward for Some Users to Hold: Another thing to consider is the size and functionality of the weapon. For smaller users, having a large chain at the front of the weapon and a small pump-action feature towards the bottom of the weapon (which doesn’t have a large pumping distance) can make it quite awkward to hold during battle.

However, this may be something that you adjust to over time as you become more comfortable with the weapon.

Overall, the Nerf Zombie Strike Ripchain Combat blaster is a weapon that both stands out and performs to expectations.

Armed with a 25-dart chain and a pump-action blaster that can launch darts at enemies up to 70 feet away, the Ripchain is a primary blaster worthy of attention.

If you need a Zombie Strike weapon that can compete with blasters from other lines and hold its own, you should bring the Ripchain onto your team.