Melee weapons are difficult to come by on the Nerf market. Why? Well, there is little to no use for these types of weapons.

Most Nerf battles only utilize blasters and, if they do allow for melee weapons to be brought into the mix, it is highly unlikely that you are going to be able to take down an enemy using a sword, dagger, ax, or other handheld weapons, even if you are within striking distance of your opponent.

If you find yourself in one of these scenarios, you may benefit greatly from a melee weapon.

One line that often throws non-firing weapons into the mix is the Zombie Strike series.

After all, when you find yourself facing hordes of the undead, it is only wise to have something that can fend off the brain-starved masses while you seek out a new blaster or replenish your ammo.

However, the best thing can often be a product that blends the best of both worlds, acting as both a blaster and melee weapon in your time of need.

Enter the Nerf Zombie Strike Brainsaw blaster, a truly unique product that breaks the boundaries of what it means to play with Nerf. If the Brainsaw is on your mind, let’s take a look at how well it performs and whether or not it will be a good fit for you!

If you’re looking for a blaster that’s big and scary, you certainly found it with the Nerf Zombie Strike Brainsaw blaster.

Featuring a long, thin, vertically tall body that comes with all the neon green and bright orange colors of the series, the Brainsaw is designed to be both intimidating yet easy to use, which is great for those who have trouble holding some of the larger blasters that Nerf has created to up the scare factor.

This product has more of a mechanical design rather than a post-apocalyptic body that you will see in other series blasters. However, this doesn’t make it seem likes its any less a part of the Zombie Strike line.

Rather, it provides its own kind of experience that truly fits still fits within the theme. This is further built upon by the many features that come with this gun, which we will cover in the sections below.

When you first catch a glimpse of the Nerf Zombie Strike Brainsaw blaster, it can be a little difficult to figure out exactly how much it holds and fires, especially if you are seeing it for the first time online. 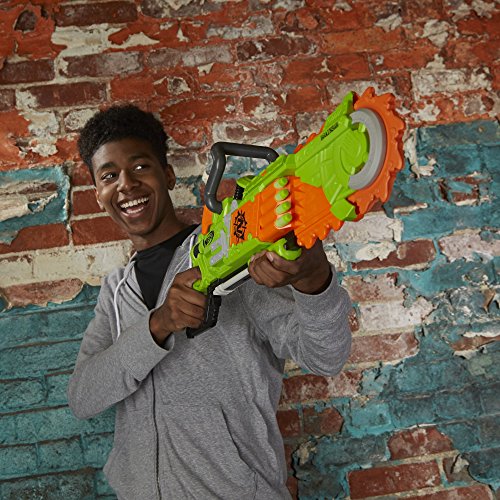 This product holds up to eight Nerf darts at a time, with four dart barrels features on each side of the blaster, rather than all together at the front as it is with most other weapons.

Considering the ease of access when it comes to the barrels, this is a fair amount of ammo that should last you on the battlefield.

Another surprising aspect of this blaster is how it fires. On each side of the weapon, you will find four barrel slots for your darts.

Load your darts into each of these slots, prime your weapon using the pump-action mechanism provided at the bottom of the blaster, and fire once you’ve successfully prepared the blaster.

When you fire, your darts will be fired one at a time from each of the slots on your weapon until you run out of ammunition. Although this blaster is certainly an exciting one to look at, we must say that the range isn’t the most impressive. 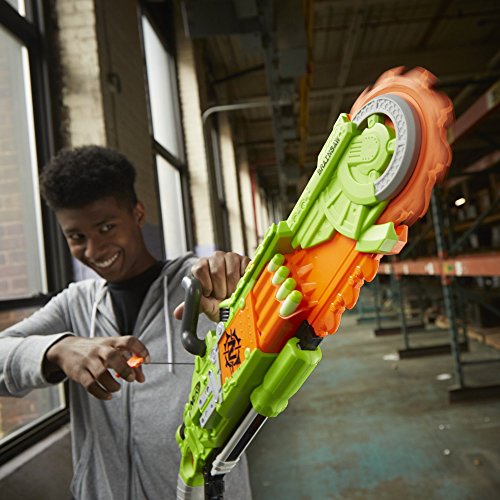 Your first shots will reach somewhere between 40 and 50 feet and performance is known to drop off after those initial shots and as you begin to work your way through the rest of your darts.

If you are looking for a blaster that can handle long distances, this is not the weapon for you. This is ideally for close-range and mid-range combat.

As we stated in the beginning, the Nerf Zombie Strike Brainsaw blaster is treasured because of its unique blending of blasting and melee weaponry.

On the front of the blaster, you can find a rotating saw that will actually spin around when you yank on the string found towards the back of the gun, which simulates the action of physically using a chainsaw (hence the name Brainsaw). 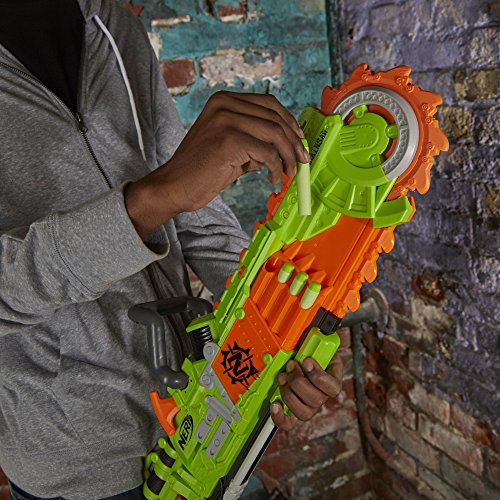 To make using this feature simpler, you can grab onto the handle that is found at the top of the weapon so that you can steady your blaster as you charge into battle with your saw at the ready.

Again, while this is not something that you are going to use if you are engaged in traditional Nerf battles, it is a fun feature to have if you are acting out a zombie-based battle scenario where having something to fend off the undead is of the utmost importance.

Easy to Reload: A lot of manual weapons, especially ones where the firing mechanisms are different than the average and there are many new parts introduced to the body, can make it difficult for you to load your weapon.

With the Nerf Zombie Strike Brainsaw blaster, this is not the case. Having the dart barrels vertically lined up on the sides of the blasters actually makes it easier for you to quickly load your darts in, which is a definite plus in our book.

Unleashes All Darts From Both Sides of Weapon: When you look at the Brainsaw, the first thought that you may experience is that the sides of the weapon are meant for storage. Even when you see it in action, it can be easy to think the other side is meant for storage instead.

Fortunately, both sides of this blaster are fully functional, and the Brainsaw goes through each of your darts until your gun is completely empty. This makes it easier to go through your ammo without having to worry about the constant reloading or shifting of darts often featured on these kinds of blasters. 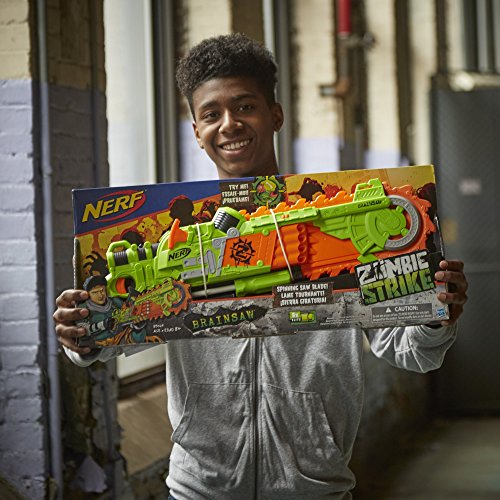 Comes With Fun Melee Toy Built in: The most exciting thing about this weapon is its chainsaw. After all, how often are you able to say that your blaster has a chainsaw attached to the end of it?

As we’ve stated throughout the article, this also comes in handy if you are using your blaster for a themed-battle where it will definitely be used. Either way, however, you are sure to be thrilled when it is finally unboxed and ready to go.

Handle Provides Additional Stability: It can be easy to forget that this blaster uses a ripcord to get the chainsaw spinning, which means that you can’t hold your weapon in the firing position and properly prime your chainsaw.

The good news is that you don’t have to! The Brainsaw comes with a large handle at the top that you hold onto as you pull the cord back. Much like a regular chainsaw, this is really the only way to get it done.

Blaster Could Benefit From Better Range: The only thing that would really make this blaster better is a range that matches the rest of the effort put into the Nerf Zombie Strike Brainsaw’s design.

With the first shots only reaching around 40 to 50 feet and the other shots known for performing less well, you won’t get a high level of performance out of this weapon, which can be somewhat frustrating for those who are buying this weapon to carry into serious Nerf battles.

Chainsaw Feature Isn’t the Easiest to Use: Don’t get us wrong, the chainsaw addition on the body of this blaster is fun to use and to look at. That said, the ripcord feature, while authentic, takes away some of the functionality of this blaster.

Switching from the trigger to the handle at the top fo the gun and moving your other hand from the pump mechanism at the front to the ripcord at the back isn’t the easiest thing to accomplish and certainly isn’t the most effective way to use the chainsaw.

While this won’t deter interested users from using their Brainsaw, this is something to consider if the chainsaw is a major selling point and you need something that is easy to fire and operate. 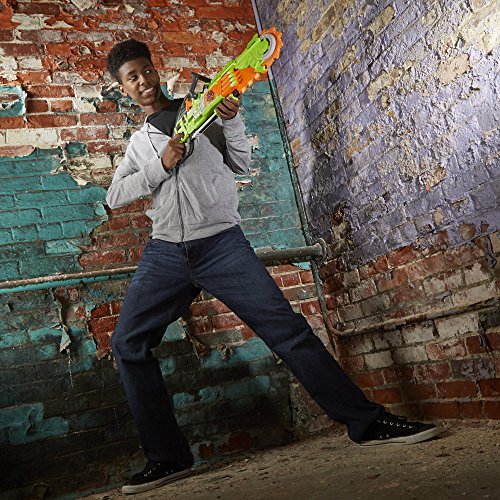 If the zombie apocalypse is on its way (and the zombies are soft enough to mow down with your Nerf blaster), then the Nerf Zombie Strike Brainsaw blaster is a great weapon to select for your needs.

While it may not have the best range out of all of the options you may find on the market, it can hold its own in close to mid-range combat. When you run out of ammo, simply grab onto the top handle, pull back on the cord, and charge into those hordes with your Brainsaw.

Boasting a unique design, dual-weaponry, and an easy-to-use loading and firing system, you should absolutely think about the Brainsaw for all of your zombie-blasting needs.