The concept of surviving a zombie apocalypse has always been appealing too many.

Whether it is the fun scare that they get when one of the infected turns a corner, the exciting tenseness that comes with making sure that you have enough ammunition to handle hordes of the undead, or the adrenaline that comes with having to sneak around and avoid detection (or else), this apocalyptic vision has gradually escaped horror movies and moved itself into popular video games, apps, and the hearts of many.

Surprisingly enough, this is true for Nerf as well. One of the many series that Nerf offers is a specialized line of blasters known as the Nerf Zombie Strike series.

The Nerf Zombie Strike series comes with a gritty design and style focused on making navigating the zombie apocalypse exciting and fun.

If you are regularly engaged in Nerf battles that have a goal and a storyline, there is no better zombie blasting experience than with these blasters.

That said, in every line, there are always needs to be side weapons that serve as backup for when you run out of darts in your main weapon or for smaller players who may not be able to handle some of the Nerf guns in the series

For these situations, we are going to review the Nerf Zombie Strike Crosscut blaster to help you enter the series and build your arsenal with confidence!

Despite its small size, the Nerf Zombie Strike Crosscut blaster is a handgun that is able to produce excitement in every enthusiast.

Proudly displaying the characteristic bright green and neon orange colors of the series, the Crosscut features the cyber-punk, thrown together body that truly brings the concept to life.

What you will also find in this blaster is that it comes with some additional features not generally included in the series, such as the “built-in” wrench design and coloring found in the middle of the body that reaches out to the saw blade located at the front of the blaster.

Down to the smallest detail, the design of the Crosscut is well-thought-out and receives praise from us in this department.

As we stated in the beginning of this review, the Nerf Zombie Strike Crosscut is not a primary blaster but a great secondary gun or backup weapon for those who are backed into a tight corner by the undead or looters. 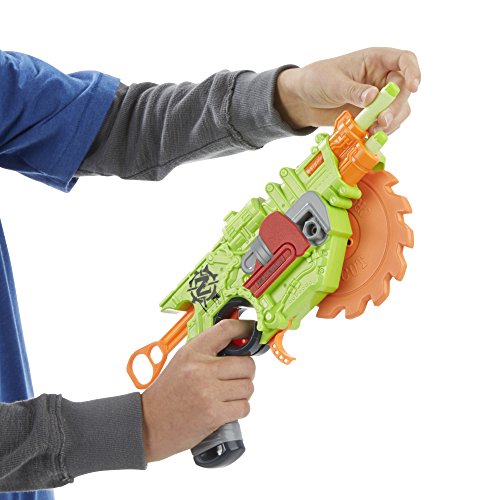 The Crosscut features one barrel stacked vertically on top of the other, allowing users to load two darts into the blaster and fire one at a time.

Although this ammo capacity isn’t the best, this can be a desirable piece to have if you have a young child who needs an easy to use blaster or a friend or relative who needs a reliable piece when they don’t have time to reload their main weapon.

Another reason why this is such an excellent product for younger Nerf enthusiasts is due to the priming mechanism.

As it is with most handguns that fire little ammunition, the Crosscut uses a pull-back priming mechanism (which features a soda can tab as the knob that can easily be pulled back with one finger) to prepare the weapon. 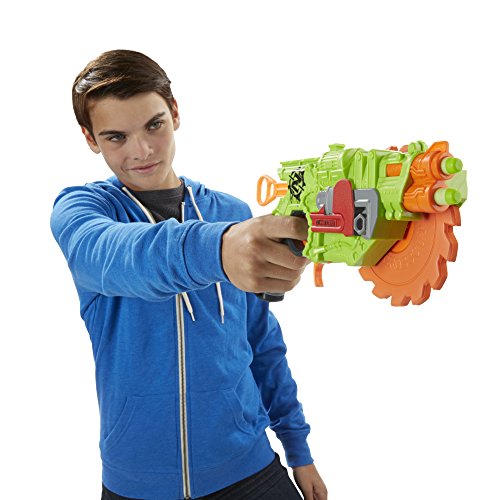 Once you pull the tab back and hear the click, you can expect to hit enemies fairly close to you.

However, don’t expect this weapon to perform as well as some of the long-range handguns like those featured in the Nerf N-Strike Elite series.

What really helps the Nerf Zombie Strike Crosscut differentiate itself from other options is the small foam saw blade located towards the front end of the weapon.

For those who run out of bullets (and who have rules where melee weapons are allowed in the Nerf battle), the saw blade acts as additional protection against the zombie hoards once you run out of ammo. 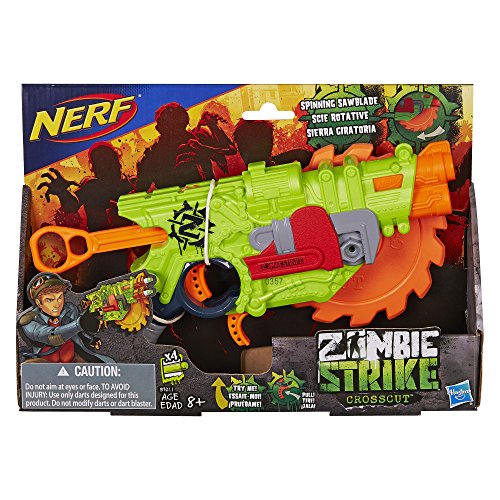 Even better, the saw blade on the Crosscut is not stationary. In front of the main trigger, there is an additional trigger that rotates the saw blade at high speeds.

While this feature doesn’t enhance the quality of your blasting experience, it is still super exciting to have! 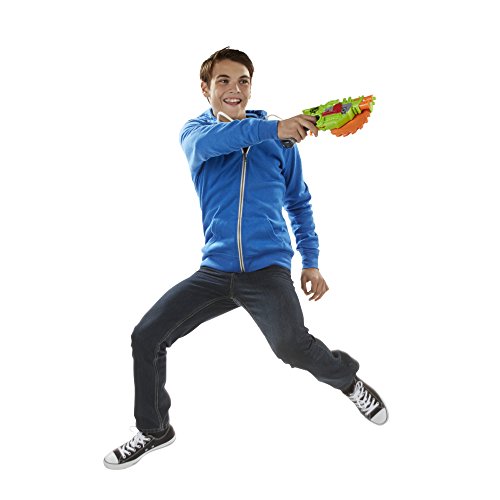 All conceptual blaster series weapons are fun, and the Nerf Zombie Strike Crosscut is no exception.

With a new design, a built-in melee weapon, and easy functionality, this is an excellent side weapon or beginner product for those who need it.

Although it does suffer from the many issues you receive when you purchase a handgun, these can easily be overlooked if Crosscut serves its purpose for you.

Overall, the Crosscut is a reliable weapon that will help you get out of any tough situation you may find yourself in during the zombie apocalypse.