When it comes to Nerf blasters, we often see some of the same trends repeated across different weapons (which is often due to the fact that great blasters utilize the same kinds of bodies and features).

Sometimes, however, Nerf will go out of its way to create something purely experimental that turns out to be both great fun and effective on the battlefield.

One of these experimental products, the Sledgefire, hails from the Nerf Zombie Strike line and gives us yet another amazing addition to the series that you will want to get your hands on if you plan on taking on the zombie hordes anytime soon.

The Nerf Sledefire was released in 2013 under the Zombie Strike line.

For those who think the Sledgefire will be the next best blaster to add to their collection, let’s break down this unique piece of weaponry and see what hides behind the plastic.

This is one of those rare moments where we are going to say that you are not going to get what you usually expect from a weapon from a specific line. 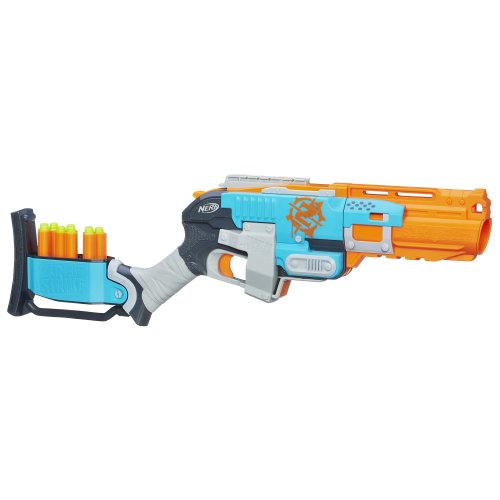 That said, don’t let the color change fool you. This is still an intimidating looking weapon, boasting the same grittiness that you find in most other similar products.

Small but mighty, you will like the Sledgefire if you are looking for a new weapon that challenges the status quo.

When it comes to ammo capacity, the Sledgefire doesn’t have a lot to offer. This Nerf blaster fires off a maximum of three darts at once, which may not be enough for those who are looking for something they can use on the field against high-powered blasters.

That said, the reason why this is a highly regarded weapon lies in the way that it fires its three darts. This blaster would be best considered to be a “shotgun”, which means that you load your darts in and unleash them all at once at your enemy.

If this is something that you would be willing to make a compromise for, then it is worth considering for your secondary and close-range needs.

What’s really exciting about this weapon is its design and functionality. Normally, Nerf guns have to be loaded and primed before they can work. The Sledgefire, however, only has to be loaded in order to function properly.

This is a weapon that breaks apart in the middle to reveal the loading area, which is accomplished by sliding a button back that can be found on the top of the blaster. 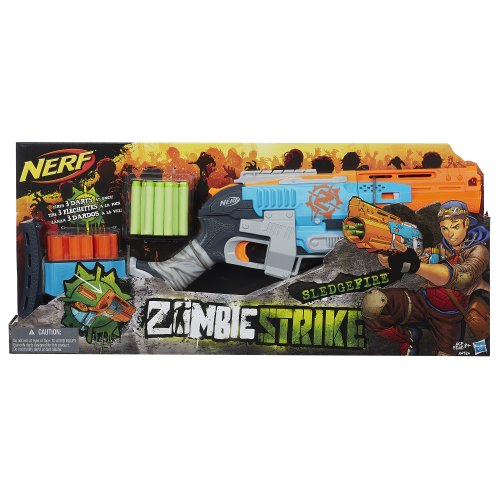 Once this area is revealed, you load your three darts into one of the provided shells (or extra shells that you have purchased for your weapon) and place them into the correct position.

Then, push the weapon back into place. The Nerf Sledgefire will automatically prime itself, which means the only thing you have to do after you have loaded your weapon is fire!

It’s estimated that this blaster can fire up to 50 feet, which is relatively impressive given its small body. (Just make sure that you keep in mind that it fires all of its darts at once, which may not be helpful from farther distances.)

The Nerf Zombie Strike Sledgefire blaster comes with two additional features. The first (and most notable) feature is its shell system that helps you load and deliver darts.

What we like about this system is that it is easy to collect all your darts and load them up at once (which, fair warning, can be quite complex if you are not accustomed to using this kind of blaster).

This also makes it easy to pre-load your shells and have them ready on the battlefield, which is life-saving for users who are accustomed to having to manually load each dart into their manual weapon.

The second feature that comes with this blaster is a built-in storage slot towards the handle of the weapon that allows you to hold approximately three shells at a time.

Although you will have to hold the rest of your shells somewhere else, this is definitely a plus on a weapon that requires a shell system to function.

Unique Product: While the baby blue may be the first major difference you notice with this blaster, it barely scratches the surface of how unique it truly is.

As a break-apart shotgun blaster that uses actual shells to deliver your ammo (and no priming mechanism to boot), this product is definitely one of Nerf’s more unique products that you should get your hands on if you are looking to build a varied collection.

Shell System Makes Storing and Loading Ammo Easier: Most shotguns require you to feed darts directly into the front, which can prove to be time-consuming and takes away from the experience.

The Nerf Zombie Strike Sledgefire blaster takes this into consideration and uses a shell system that offers a more authentic, functional experience. If you are a stickler for authenticity, this product is an excellent choice for you.

Easy Break With Top Button: Some blasters require you to force your weapon in half, which is both scary and undesirable.

The Sledgefire makes this process less scary by allowing you to push down a button at the top of the blaster, revealing the break and giving you easy access to your loading area.

Extra Storage Space for Shells on Blaster: Storage space, in any capacity, is an amazing feature to have on a Nerf blaster.

Although this weapon only has room for three shells, this gives you enough room for you to store three shots while having one shot ready in the barrel of the weapon. You also need to take into consideration the ease of having pre-loaded shells on your person, which are easier to carry around than stray bullets.

Fair Distance for Weapon Type: 50 feet is pretty impressive for a mini-shotgun, especially given the fact that other weapons with improved functionality can only fire at shorter distances

If you’re looking for something that can hit your enemies at close ranges and have the potential to strike them at medium distances as well, this shotgun blaster will get the job done.

Need to Buy Additional Parts to Make This Purchase Worth It: This blaster only comes with three shells. As you may have already noticed, this is only three shots, after which you will have to prepare your shells for another shot.

Unless you are willing to invest in additional shells for the Sledgefire, you may want to consider another weapon for your needs.

Reload Time May Still Be Slow: Some people have gotten used to the loading mechanism on this weapon while others still have trouble using it.

This is partially due to the shell system, which needs to be ready for loading. Otherwise, you will have to load the three darts into the shell, flip your blaster open, load it in, and then click it back into place.

If you aren’t into having to have everything prepared in order to use your weapon, this may be another disadvantage that may prevent you from enjoying what the Sledgefire has to offer.

As we stated above, the good news about the Sledgefire is that you don’t have to worry about having to search for stray darts after you have fired your weapon.

This is an issue with many manual weapons (unless you have a pouch full of darts at the ready so that you don’t have to pick them up off the battlefield).

While the shell system makes it so that your darts are prepped and ready to go, you now have to hold onto your shells and keep track of those throughout the course of the battle.

This may not be a major disadvantage but it is something to know if you are not a fan of blasters that require you to hold onto an excessive amount of extra ammo and other products necessary to make the most out of your Nerf blaster.

There are very few blasters out there that can say they are truly different from most other blasters on the market. Whether it be the design, the firing style, or the delivery, most guns mimic some aspect of another weapon.

The Nerf Zombie Strike Sledgefire blaster is truly a product of its own. With its easy-to-use shell system, break apart body, great 50-foot range, three-dart delivery, and extra storage, this is a manual weapon to give other Zombie Strike blasters a run for their money.

If you want something unique, fun, and effective, you should make the Nerf Zombie Strike Sledgefire your next purchase.

The 5 Best Nerf Rival Blasters THAT YOU SHOULD OWN!