Shotguns, although not the most practical of all Nerf blasters, are powerful and are great fun to blast your friends with. However, not all shotguns are equal. Some Nerf shotguns are advertised as powerful but offer very little range.

Nerf guns are awesome, but to avoid purchasing a shotgun that gives you problems rather than wins, use the buyer’s guide and the suggestions below to help you find the best Nerf shotgun for your needs. 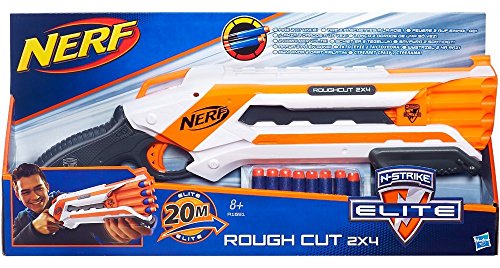 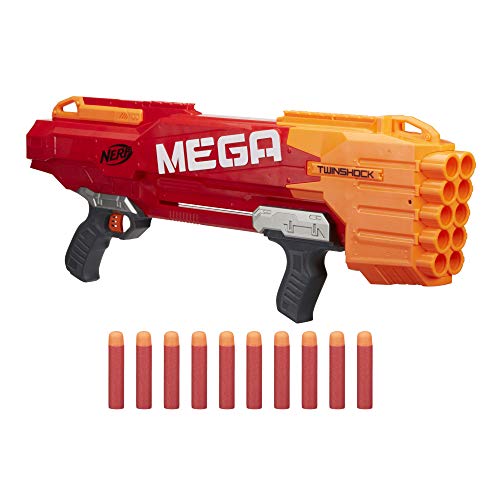 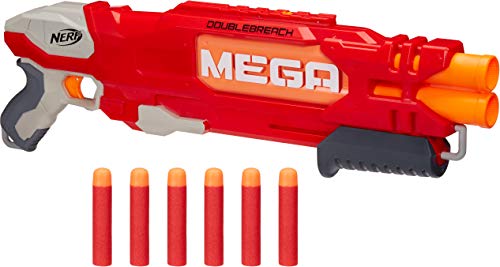 The Nerf N-Strike Elite Rough Cut 2X4 Blaster is one of the more popular shotgun designs that Nerf has to offer.

This blaster has eight separate barrels that are capable of firing two Nerf darts at a time or one at a time if you pull the trigger lightly enough. The pump-action handle at the bottom of the gun makes it easy to shoot all eight bullets in quick succession, and the front of the gun is easily accessible, making it quick to reload. Also, this shotgun can launch its bullets up to 75 feet.

Though this is a high capacity blaster, the only downside to this pump action blaster seems to be that the bullets sometimes have difficulty staying in the gun.

They protrude a little bit after you pump the Nerf gun and this can make it difficult to launch them. If you don’t mind pushing them in after each pump or being extra careful about the way you hold the gun, you will have yourself one of the best Nerf shotguns out there. 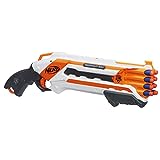 The Nerf N-Strike Mega TwinShock Blaster has ten barrels situated at the front end of the gun that are open and make it easy to reload during Nerf battles.

This Nerf shotgun still gives you the ability to fire one or two bullets at a time, depending on how strongly you squeeze the trigger using slam-fire. Because this gun uses mega darts, you will be able to fire bullets as far as 85 feet.

Much like the Nerf N-Strike Elite Rough Cut 2X4 Blaster, this shotgun has a little difficulty when it comes to firing. However, fewer people have reported it and the extra power in this gun helps out.

If you want a powerful Nerf shotgun that used mega darts with slam fire that works as well as some of the other Nerf shotguns, purchase this one. 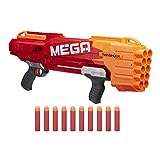 For those of you who want a Nerf shotgun that doesn’t require a range sacrifice, you should consider choosing the Nerf N-Strike Elite DoubleBreach Blaster.

The Nerf N-Strike Elite DoubleBreach Blaster, unlike the previous blasters mentioned in this article, is only a double barrel that is capable of holding up to two darts at a time.

However, this pump action blaster is capable of launching its bullets up to 90 feet and fires one dart at a time to make sure that you get both range and accuracy.

Along with firepower, this nerf shotgun comes with storage on the side that gives you the ability to hold an additional four bullets for more pump action fun.

Since it is a double barrel and doesn’t have the ammo capacity of some of the other guns, it takes a long time to reload, which could be a problem during a Nerf battle. If you don’t mind this, however, you’ll have yourself a powerful Nerf shotgun. If you want a Nerf shotgun that fires multiple darts and looks good doing it, take a look at the Nerf Zombie Strike Sledgefire Blaster.

Unlike many of the other Nerf shotguns or Nerf guns, the Nerf Zombie Strike Sledgefire Blaster is able to shoot three darts at a time from its one chamber. The blaster comes with three reloadable shells and nine darts so that you will be able to have three shots ready when you first purchase it.

Also, this Nerf gun has a hammer-cocking mechanism that makes it easier to cock than other shotguns and allows you to use it with one hand during battle.

The only problem that this gun seems to have is that it misfires if not loaded correctly. This can be difficult to do, especially in the heat of a battle, but taking the time to load it is necessary if you want to get the maximum power out of it.

If you don’t mind spending time reloading, you should consider adding this shotgun to your collection. The Nerf N-Strike Barrel Break IX-2 Blaster is a simple option for anyone with any type of Nerf experience.

This shotgun is a double-barrel shotgun that is capable of blasting one or two bullets at a time. It comes with its own detachable ammo rail that can hold an additional eight bullets at the top of the gun and has all bullets included in the package. Best of all, it is more powerful because it takes batteries and you can purchase it for a relatively good price.

Despite its simplicity, there are some drawbacks. The most notable problem is the fact that it takes batteries. If you do not want to spend money continuously on your Nerf gun, do not purchase this blaster as it will require you to purchase batteries regularly.

Also, if you accidentally load this gun wrong or cock it too many times, it is known to jam and create problems for you. 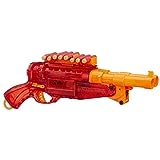 When you start shopping for your Nerf shotgun, there are some qualities that you need to look for in a blaster.

A Nerf shotgun without power is one thing: useless. Although shotguns in real life are typically meant to be used for close-range combat only, a good Nerf shotgun should have the same range that a semi-automatic blaster or a small Nerf pistol does.

Seek out a shotgun that can shoot at least 75 feet. With this kind of range, you will be guaranteed to hit targets if you intend to use your Nerf blasters for close-range combat. This type of range, although it may be inaccurate, will also give you the power you need to launch your bullets toward targets much farther away.

Do you want your Nerf blaster to be able to shoot one bullet at a time?

Do you want it to be able to shoot two at a time? These are the type of questions that you need to ask yourself before you purchase any Nerf shotgun as there are advantages and disadvantages to each type of firing method.

For example, if you choose a single-barrel shotgun, you will have a better chance of hitting your target from both close range and far range.

A double-barrel shotgun, on the other hand, will work well for close range but won’t work as well if you find you need to hit a target who is a greater distance away.

If you think that you will only be using your shotgun as a blaster for stealth attacks or close combat, you should choose a double-barrel blaster. However, if your shotgun will be one of your main weapons, you may want to choose a single-barrel blaster instead so you can blast enemies who are farther away from you.

Functionality is definitely an important part of a Nerf blaster, but style and design will make you stand out from the competition. Shotguns look great by themselves, but many of the Nerf blaster lines offer additional features that make them look even better. Carefully research each of the shotguns available before purchasing to ensure that you get the right style of gun that you want.

It’s obvious that too big of a Nerf blaster can ruin your performance during a Nerf battle. What about a gun that is too small?

The truth is that a gun that is too small to handle can also be a problem when it comes to a Nerf battle.

Some shotguns (and even some Nerf blasters) on the market are on the small side and can be difficult to use, considering that most shotguns require both of your hands. Make sure that any shotgun you choose to purchase can be comfortably held and cocked without any complications.

5. Ability to Be Modified

Since shotguns are rather plain and can only do so much on their own, having the ability to modify it will help you greatly in a Nerf battle. For example, you may want to add a stock to your weapon as well as a scope so that you can have ammo prepared for the battle and improved accuracy.

Before you do this, though, make sure that your shotgun of choice is compatible with certain accessories. While there is a likelihood that almost any gun you choose can be modified, there is still the chance that it may not.

-You may like: the Best Nerf Elite Darts on the Market

You don’t want to purchase a Nerf shotgun only to find out that it is difficult to cock or reload. This can be frustrating and can make it that much more difficult to be the winner of your Nerf battle. Always do extensive research on your chosen shotgun before you purchase it so that you can avoid buying a blaster that is too difficult to use.

Out of these five options, we highly recommend purchasing the Nerf N-Strike Elite DoubleBreach Blaster.

Although it doesn’t have the same firepower as some of the other blasters, it’s powerful, reliable, and has additional storage on the side.