When you run out of ammo for your primary weapon, what do you do? If you are like most Nerf enthusiasts, you probably have an extra stash of smaller Nerf weapons with you for these emergency situations.

Generally, there are two main types of backup weapons: pistols and mini blasters. Overall, mini blasters, while they are not going to measure up to an opponent with a massive blaster, still have their uses.

If you’ve done some research, the Nerf N-Strike Elite Triad EX-3 blaster has most likely made an appearance due to its popularity in the community. Even though this option is rather simple, you should still know what you are buying before you go out and purchase your own.

If the EX-3 is a potential option on your list, here is some more information on the EX-3 that will help you better understand what you will get out of it.

For many, the question is, why would I want to buy a mini blaster? Considering the full scope of Nerf weapons available on the market, this is a reasonable question to ask for most people.

If you feel attracted to this product but don’t know what you would possibly need it for, here are some reasons why you may want to purchase a mini blaster.

1. Mini Blasters Are Great for Younger Enthusiasts Who Are Just Starting Out

A lot of younger Nerf enthusiasts want to join in on the fun but don’t have the strength necessary to tote some of the larger weapons around and use them properly. 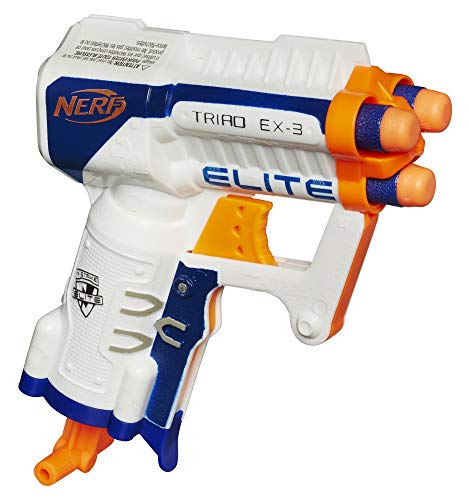 In addition to this, there is also the concern of safety when it comes to the power behind certain Nerf weapons. Luckily, you can avoid both of these problems by purchasing a mini blaster instead.

Mini blasters make it easier for smaller hands to work a Nerf gun and serve to improve overall safety as well. If you are buying a gift for a child rather than a weapon for yourself, these mini blasters are excellent products to consider.

2. Mini Blasters Make Excellent Backup Weapons When You Find Yourself in Tight Situations

As we stated in the introduction, many people use mini blasters and other smaller Nerf products as backup weapons for when they find themselves in situations where they may have no other options. 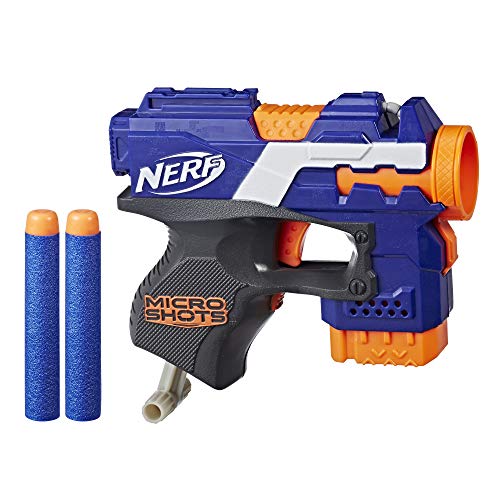 For example, if you run out of ammo in your primary weapon and you don’t have enough time to reload your weapon and eliminate the enemies in front of you, you are going to need something to fall back on.

With a mini blaster, you can easily pull out your EX-3 and fire at your opponent, wasting very little time along the way.

Although you can’t go around using a mini blaster as your only weapon, it is always helpful to have something for those situations when you have lost your only source of firepower and need to take care of the looming forces.

Let’s face it: while big Nerf guns are great for most attacks, they are often terrible when you are trying to sneak up on your opponents. 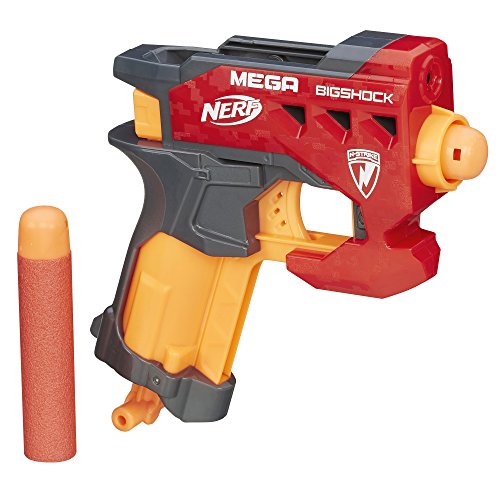 Even if they are not battery powered, the priming mechanisms will often give you away. Mini blasters, on the other hand, are difficult to spot, can be quietly primed, and can fly at your opponent without giving away with your location.

Whether you are silently following an enemy or attempting to reach them from afar, a mini blaster will help you catch your prey without letting them know that you were ever there.

4. Mini Blasters Don’t Force You to Stretch Your Budget

There are Nerf guns that could be considered investments and then there are those that are more than affordable.

Because of their small size, mini blasters are more than affordable, falling around the price of around $15 and less, depending upon which one you decide to buy and whether or not it is a collectible piece or just a regular blaster.

Either way, choosing to buy a mini blaster will never be a stressful experience on your bank account. 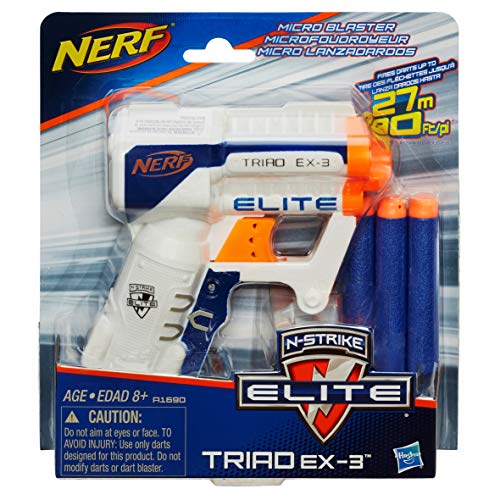 Featuring a primarily white body with touches of blue and orange found here and there, the EX-3 is not a bad looking gun. That said, there is nothing necessarily super exciting about its style or design either.

Much like us, you will be happy with the overall look but won’t feel compelled to buy the blaster based on this alone.

As you may have guessed by its name, the Nerf N-Strike Elite Triad EX-3 blaster is capable of holding up to three darts at a time. 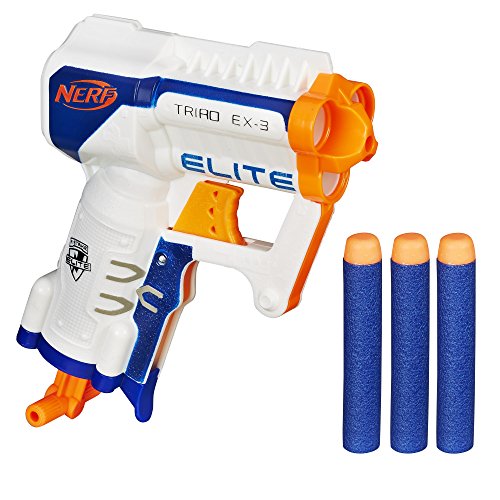 While this may not be impressive by a regular Nerf gun’s standards, this is a rather large capacity in terms of the average mini blaster.

If you are looking to get one of the best mini blasters on the market, the EX-3 should be your first choice.

When it comes to mini blasters, you are almost always going to see a plunger in your firing mechanism, which is true for the EX-3 as well. Located at the bottom of the blaster is a small knob that you just have to pull down on.

Once you pull down, you can fire a dart after each pull. The great thing about the EX-3 is that it knows which barrel is loaded so that you do not have to switch your darts around after you fire.

Much like many of the N-Strike Elite series blasters, the Nerf N-Strike Elite Triad EX-3 has a range of approximately 90 feet. Despite its small size, its performance and range are still impressive by normal standards.

1.    Low Price - Some people are on the hunt for budget-friendly Nerf blasters and the Nerf N-Strike Elite Triad EX-3 blaster comes in at the extremely low price of only $5.

Even if you aren’t in love with it or don’t get as much use out of it as you initially expected to, can you really beat a Nerf blaster that’s only $5? That’s what we thought!

2.    Great Range and Ammo Capacity - A three dart capacity doesn’t seem like a lot, but the truth about many mini blasters is that they often carry only one or two darts at a time, and they may only be able to shoot one at a time as well. Even when discussing mini blasters, having a larger ammo capacity is almost always an advantage. Along with this improved ammo capacity, you also have the ability to hit targets up to 90 feet away.

Considering this is a mini blaster, both of these abilities make it well worth the $5 you would be spending.

3.    Easy to Use for All Ages - No matter how old you are, the Nerf N-Strike Elite Triad EX-3 blaster focuses on simplicity and ease-of-use.

For younger children, the weapon is easy to prime and fire, which is important if you want a child to have fun while they are playing Nerf with their friends.

For older children, the gun is the perfect stealth weapon that you can carry around in your pocket and pull out when you need it. Put simply, anyone can pick it up and operate it, making it a friendly option for anyone who is interested in the gun.

We don’t need to list anything here because there is almost nothing to complain about. That said, there are a few common problems that we should address here.

The first being the fact that darts have a tendency to fall out when the blaster is loaded and the face is towards the ground. The barrel doesn’t hold onto the ammo very well and if you happen to face the blaster downwards, your darts are likely to fall out.

Additionally, some people have reported an issue with the plunger pushing air into the chamber, which may push out the dart in the process.

Whether you are dealing with the first issue or the second issue, make sure that you keep your darts pushed in so that you do not experience any malfunctions while you are trying to fire your weapon.

While a mini blaster isn’t going to provide you with an amazing experience that you would expect from a medium to a large-sized weapon, those who are deciding on a mini option will be very happy with the Nerf N-Strike Elite Triad EX-3 blaster.

From the three barrels that are capable of holding up to three Nerf darts at a time to the easy-to-use priming system that makes for quick shots, everyone who purchases the Nerf N-Strike Elite Triad EX-3 blaster is going to be happy with their purchase.