From paintballing to other airsoft guns, children and adolescents love playing with toys that allow them to play games of strategy and skill with their friends and in indoor and outdoor environments that can be highly customized to meet their needs and develop a complex area for play.

Nerf has produced products that create a much safer way to do this and make it possible for everyone to engage in these kind of games without having to worry about the danger and injuries that could occur if they were to be hit with a paintball or a plastic or metal pellet, which can also be a much more cost-effective form of play as it eliminates the need for extra armor and accessories (a plus for parents everywhere).

This safety leads many to believe that Nerf guns are inherently safe.

While getting hit with a foam dart is certainly better than the alternatives listed above, however, that doesn’t mean that there aren’t risks for certain individuals.

The 6 Best Nerf Guns for Toddlers

Don't be fooled by this blaster's compact design. With its micro size, the Jolt is a great blaster to take almost anywhere and be ready to battle at a moment’s notice!

Although these foam darts can be soft, Nerf guns have the ability to launch these darts to distances of up to 90 feet or more, which can be dangerous if the weapons are utilized up close on a smaller enemy.

With this in mind, the question that many parents have is, “what Nerf guns would be best for my small child?”

If you have been looking for a Nerf gun for your child that will allow them to have fun but will keep them safe at the same time, here is a list of some of the best safe Nerf guns for toddlers that you can choose from if you have a little one at home who wants to join in on the fun! 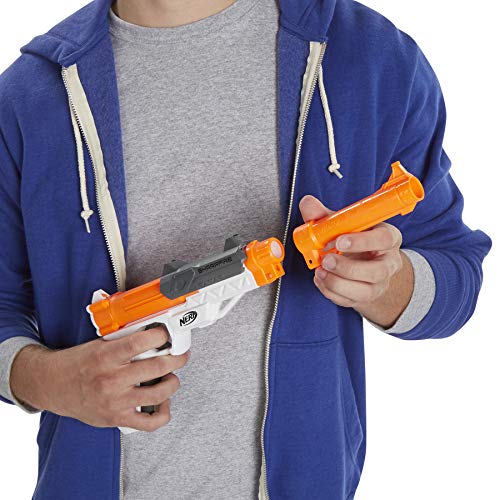 To be completely honest, many of the blasters listed below are going to be on the relatively small side.

This is due to the fact that toddlers will not only need blasters that are easy to carry around and lighter on the firepower but are also easier to use for smaller hands as the larger ones are simply too complex, heavy, and powerful for young children.

It is entirely up to you to decide whether or not your child will need these smaller ones or are capable of handling some of the medium-sized blasters that Nerf produces.

That being said, here are the 6 best Nerf guns for toddlers that you should consider purchasing for your own child!

The Nerf N-Strike Elite Jolt is one of the smallest and most basic blasters that Nerf has to offer, which may not be as great or exciting for larger enthusiasts but is perfect for your toddler!

The Nerf N-Strike Elite Jolt is a compact blaster that is designed to hold and fire one bullet at a time and is designed so that young ones can easily load that bullet through the opening of the barrel of the front.

Rather than opting for some of the more complex cocking mechanisms, this blaster has a cocking mechanism located on the bottom of the handle of the gun that your little one just needs to pull down on in order to prime the weapon. Once that is accomplished, they just have to pull the trigger to fire.

Because it comes from the N-Strike Elite series, this little weapon can hit targets from up to around 40 feet away with ease, making it a great weapon for little kids who want to stealthily sneak up on their enemies!

Overall, this little blaster is perfect for a young child who wants to join on the fun but may not be able to handle a more powerful gun yet.

The N-Strike GlowShot Blaster functions very similarly to the first product in this list but adds something a little extra to make it more exciting for children to use.

Like the previous product, the Nerf N-Strike GlowShot Blaster is only capable of shooting one dart at a time and is easily able to be loaded from the front. Unlike the other blaster, however, this gun features a pull-back cocking mechanism on the back end of the gun that is arguably easier to use for children. 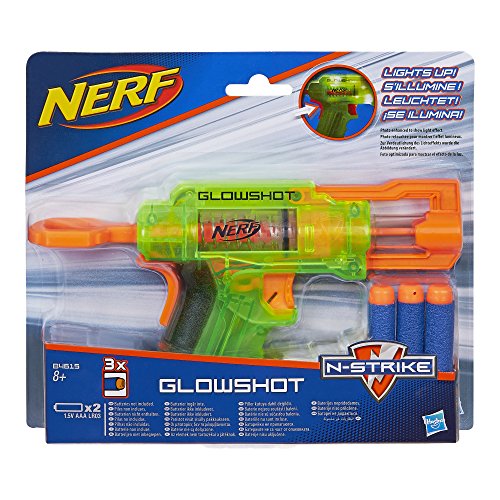 Additionally, the cocking mechanism is curved and smooth on the end so that children can easily pull it back without hurting their fingers in the process. This blaster can also reach distances of approximately 30 to 40 feet as well.

What truly makes this blaster stand out is its ability to light up. Once batteries are installed, all a child has to do is hold a button near the trigger to illuminate the transparent green body of the gun and make it glow!

If your child wants something to use at night as well as during the day, this blaster is a great option.

A lot of children may be fascinated with bows and crossbows but many may not be able to yet wield these large Nerf weapons during war, which can be frustrating for children who are very excited about these types of products. 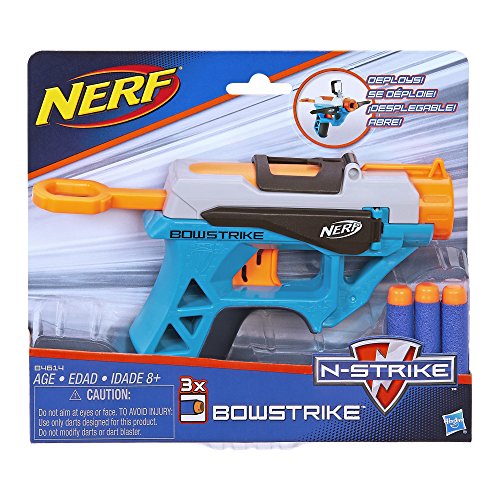 This compact blaster features the same single shot, front-loading body with a pull-back cocking mechanism but adds a little flair to the traditional compact blaster design by adding some pastel blue to the mix and by making it look like a little crossbow.

While it doesn’t feature the same crossbow mechanisms that you may find in other blasters, it can still be exciting for toddlers who like the look and who want to pretend that they are firing off this kind of weapon.

As with the other blasters, you can expect to see this blaster fire around 30 to 40 feet, making the Nerf N-Strike BowStrike Blaster a functional and stylish option for toddlers.

The fourth mention in this list is certainly a turn from the many other blasters we have seen insofar and is one that will get many young Nerf enthusiasts excited.

The Nerf Zombie Strike Doublestrike Blaster hails from the Zombie Strike series and features its exciting post-apocalyptic design and color scheme, with a neon green and orange body and a dark handle wrapped in plastic that resembles hospital bandages.

As you may have gathered from the title, this blaster can actually handle priming and firing two darts (one at a time) and has the same easy front-loading ability as other compact blasters. 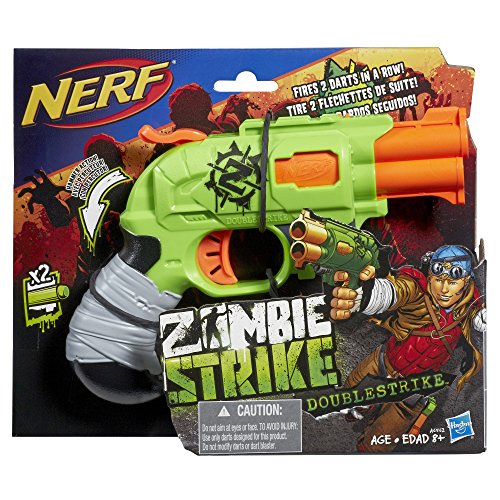 What truly makes this gun a valuable asset on the field is its priming function. The Nerf Zombie Strike Doublestrike Blaster uses a hammer cocking mechanism that children can easily press down on to prime the blaster.

This loading mechanism allows users to go through the entire process with one hand, which allows them to use their other hand for another blaster.

If your toddler is looking for a blaster that gives them more firepower and more opportunity in battle, the Nerf Zombie Strike Doublestrike Blaster is one of the best blasters to choose!

The Nerf N-Strike Elite Triad EX-3 Blaster may be small but it looks and functions as one of the fiercest (but safest) small blasters that Nerf has to offer.

Yet another upgrade in the field of micro blasters, the Nerf N-Strike Elite Triad EX-3 (view the comprehensive review) can hold and fire up to three Nerf darts at a time and feature the easy front-loading capabilities that make the other Nerf blaster so great. 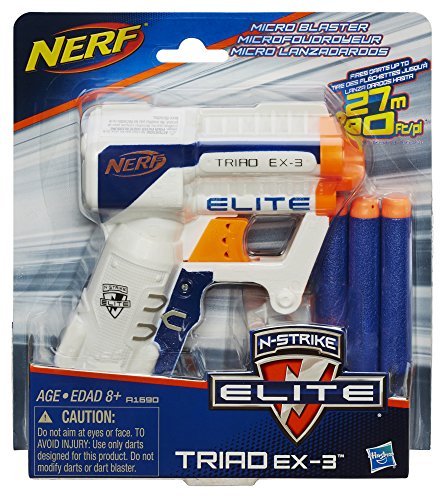 With this compact option, they returned to the bottom cocking mechanism which needs to be pulled downward in order to prime the gun for firing.

Because this gun comes from the N-Strike Elite series, it has a lot more range to offer than other blasters from various Nerf lines, boasting an impressive distance of 90 feet per shot.

If your tot needs a bit more firepower but still wants a smaller option, the Nerf N-Strike Elite Triad EX-3 is an excellent product for both them and you!

While the Nerf N-Strike Elite Firestrike is a much bigger option when compared to other options on this list, the features that are included in this product make it a safe and equally usable alternative for toddlers who are able to handle a little more than just the compact blasters.

The Nerf N-Strike Elite Firestrike is comparable to a handgun and is capable of firing one bullet at a time and has easy front loading capabilities for children. In addition, it has a pull-back cocking mechanism that makes it simpler for children to prime the weapon for firing each time that they use the gun. 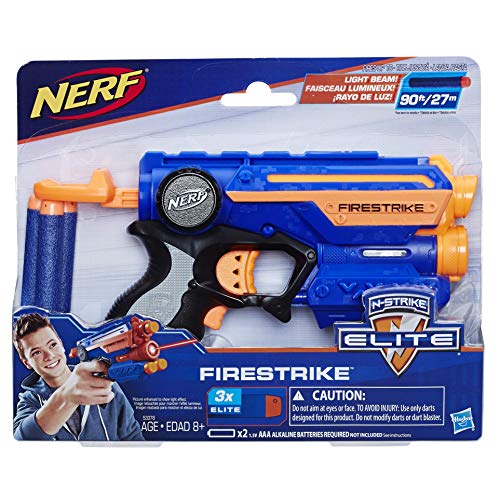 What truly makes this weapon a stand out, fun-to-use blaster is the two extra features at the front of the blaster.

This weapon has a little bit more distance than some blasters and is able to launch darts approximately 75 feet.

Overall, this is a great choice for toddlers who can handle a slightly bigger weapon that has some of the best features of compact blasters.

Keep in mind that this by no means a comprehensive list. Nerf has endless options when it comes to micro blasters and there may be products out there that are both safe and great that didn’t make it on the list above.

This guide simply acts as a starting point to help you begin your child’s Nerf journey and to provide you with more information on what you should expect from these Nerf blasters.

If you are a parent who wants the best for their toddler, start your shopping search with the reference guide above of 6 safe, amazing Nerf blasters on the market that you should look at today!