Nerf is most well-known for its dart blasters, but squirt guns are arguably another portion of the toy market that it corners.

In fact, you might be quite familiar with the popular brand Super Soakers. But where did Super Soakers go, and what’s the history of this brand name squirt gun associated with wet and wild fun?

If you love not only playing with Nerf but learning about its extensive history and how certain toys came to be, let’s dive into the story behind Super Soakers.

What Happened to Super Soakers? Nerf Takes Over

As most great inventions start, the inception of the Super Soaker line was a complete accident. It all started in 1982 when Air Force and Nasa engineer Lonnie Johnson was working on a concept for a new refrigeration system.

During his experiments, he accidentally shot a powerful stream of water across his bathroom while he was testing a pump. The pressure was so great that it inspired him to switch gears and try his hand at creating a squirt gun entirely.

Unlike other blasters of the time that relied on motors, Johnson’s first prototype leveraged air pressure to force out a stream of water and consisted of PVC pipe, plexiglass, O-ring seals, and a 2-liter soda bottle.

While the results were promising and Johnson knew that he had a hit on his hands, manufacturing costs were too high to make production a thing. It was then that he got managed to get a licensing arrangement with a toy company known for making BB guns and pellet guns called Daisy.

Unfortunately, while the development was exciting for the future of Johnson’s creation, it didn’t take the intended course. He worked with Daisy for two years to produce the blaster, but Daisy faced numerous obstacles as it went through several reorganizations, which only set the project back each time the company underwent changes. In 1987, Johnson decided to approach Entertech, a company that produced battery-powered water guns, with two new toy concepts that included a water-propelled toy airplane and a vibrating machine gun. Entertech was very impressed by the airplane and actually produced this invention. However, over the course of the next two years, Entertech experienced financial hardships due to the growing issues surrounding water guns that looked like real guns and accidents involving children using these toys. By 1989, Entertech was bankrupt and Johnson still didn’t have his water gun on the market.

The Creation of Super Soaker 100

1989 was a turning point for Johnson and his water gun. In March of 1989, Johnson met with toy company Larami. After an impressive demonstration to the company’s president where Johnson where he managed to shoot water across the room.

This got him a contract with Larami, and the first Power Drencher Super Soaker 50 was born!

A few years later, Johnson proceeded to create the Super Soaker 100 as well to maintain the momentum for his creation and for Larami itself. From 1991 to 2002, the Super Soaker continued to receive modifications that would make it more powerful. As we discussed in another guide on Super Soakers, there were some issues along the way in terms of water pressure as some reported injuries as well as circulated stories of someone’s eye popping out.

As such, we start to see the water pressure fall a little bit after 1996 as toy guns and safety continued to remain an issue in the news and society.

Still, that didn’t stop the popularity of the Super Soaker. Even with the reduced pressure, Super Soakers did their job wonderfully and provided hours of cool summer fun for children who wanted to swap out their dart blasters for water blasters instead. But as you noticed above, we stopped our timeline abruptly in 2002.

Given that you can still buy these squirt guns online and in-store, you may ask, what gives?

-You May Be Interested: The REAL reason why Super Soaker CPS 2000 Was Banned

2002: Larami Merges With Hasbro and Hasbro Takes Over the Super Soaker Line of Water Blasters

As with many of the toy companies that we’ve mentioned insofar, Larami didn’t last forever. In 2002, Hasbro absorbed Larami, officially acquiring Super Soaker for themselves. From 2002 to 2009, they began working on and releasing new versions to the public. Of course, that doesn’t mean that Johnson left when Larami was taken over by Hasbro. Johnson actually played a very active role in the development of the Super Soaker line over the years, where he was actually responsible for helping out with the production of some Nerf dart blasters as well.

Where Is the Nerf Super Soaker Line Today?

With amazing Nerf Super Soakers like the Hydra and the Soakzooka, there’s still plenty of fun to be had with this line of extremely popular water blasters.

While certain things come and go, the good news about Super Soaker is that it’s not really gone. Instead, it’s just been rebranded. Hopefully, this guide has given you more insight into the direction the line of squirt guns has taken over the years and where these fan favorites are today.

If you’re interested in buying some squirt guns as a gift for more summer fun, we have plenty of other squirt gun guides on our website that discuss some of the best Nerf Super Soakers and what they have to offer players in terms of power and water capacity! 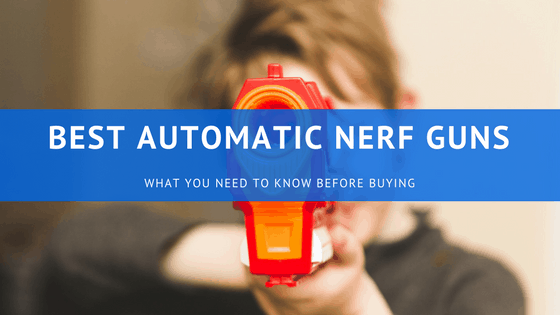