Nerf seems to pump out a host of dart blasters each year, which has resulted in an extensive line of blasters to choose from across multiple series.

But while water guns aren’t as highly discussed, the truth is that these products have seen just as much attention.

While there are a ton of these blasters out there, many have been discontinued or are simply too small to offer the right experience that players are looking for.

- To cut to the chase: My favorite is the Nerf Super Soaker Soakzooka 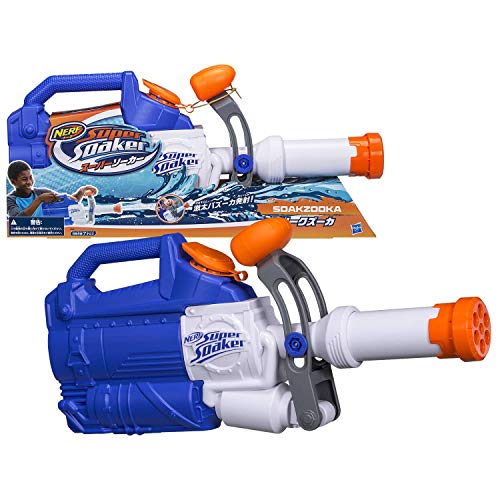 There are very few blasters that we would say are crafted almost perfectly. However, the Nerf Super Soaker Soakzooka absolutely qualifies as one of them.

The Nerf Super Soaker Soakzooka is a classic-style Nerf water blaster that features an attractive blue and white body with a splash of orange in all of the right places. However, it still adds some of the mechanical flair that we do like to see in more modern products.

Speaking to the performance of this blaster, the Nerf Super Soaker Soakzooka comes equipped with a 1.6-liter water tank and uses a pump-action mechanism located at the top of the blaster to spray water at opponents.

Rather than holding it as you would a typical blaster, this water gun features a handle towards the back of the blaster and a handle at the top to streamline operation. This makes it easier to set down, fill, and operate without experiencing any issues along the way.

Additionally, the Nerf Super Soaker Soakzooka comes at a much higher price than the majority of Super Soaker blasters and is still very affordable. 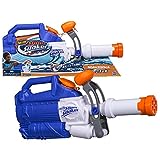 I have a complete comparison between the Soakzooka and Hydra that you can check out here.

Equipped with the same color scheme and pump-action capabilities, the Nerf Super Soaker Hydra instead handles like any other water gun, offering a handle to hold onto and featuring the pump-action handle towards the bottom of the weapon rather than at the top.

This change in design does make it a little bit harder to operate in comparison to our first suggestion. However, this blaster features a built-in shoulder stock that you can hold against your body to steady your aim as you’re blasting.

The cap on this one is featured towards the back of the weapon. It’s important to hold the blaster steady and to avoid setting it down as this product is known to leak when it’s set on its side.

The Nerf Super Soaker Hydra also offers a 1.9-liter tank instead of a 1.6-liter tank. 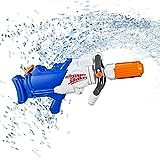 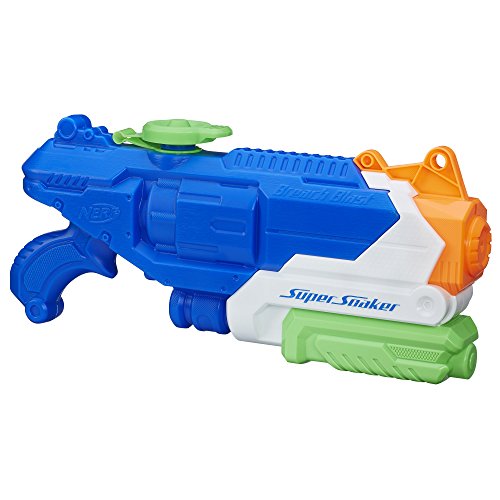 The Nerf Super Soaker Breach Blast offers a style that we’re more familiar with when it comes to the Nerf blasters of today.

Similar in style to the Nerf N-Strike Elite Strongarm, this is a medium pistol-sized blaster that features a blue and white body with lime green and Nerf orange elements in the main features of the blaster. (In case you are interested - read my Strongarm review here)

The similarity in design also means that this blaster comes with a typical pump-action mechanism towards the front of the weapon as well as a handle where you can get a better grip on your blaster (although there’s a place where your finger trigger will go, you don’t have to pull any triggers to release your water).

The cap is located conveniently at the top back of the blaster and it’s reported that this water gun can fire its streams up to 38 feet. Additionally, this blaster is much easier to carry and use no matter how far away an opponent may be.

If you’re looking for a reliable Super Soaker that’s easy to operate and doesn’t suffer from other problems faced by similar blasters. 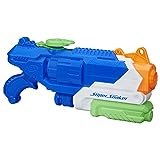 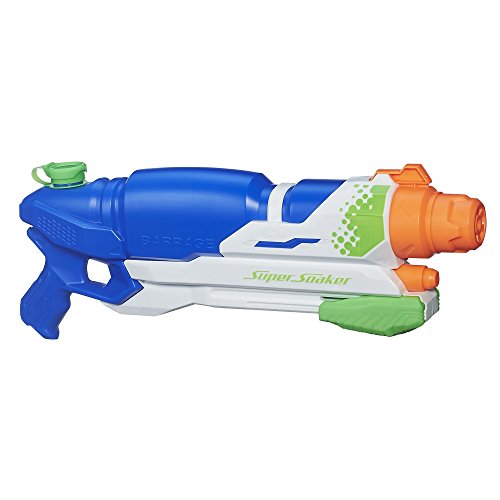 The Nerf Super Soaker Barrage Soaker is a versatile, rifle-style water gun that is the perfect addition to any collection. Unlike the other blasters that we’ve listed above, this one truly distinguishes itself from its competition by offering three different types of firing styles.

By simply twisting the nozzle at the front end of your blaster, you can access scatter mode, flood mode, or distance mode, depending on who you’re firing at and what type of environment you’re in.

Additionally, this blaster comes with an impressive 2.4-liter capacity for tons of firing fun.

Beyond this, the Nerf Super Soaker Barrage Soaker offers a similar performance to the other blasters listed above. This blaster features a pump-action mechanism and a handle (without a trigger) to make it easier to use your blaster.

The access cap is located towards the very back of the blaster and it’s important that you hold it steady so as to avoid accidentally spilling water while you’re playing. This blaster can also shoot up to 38 feet. 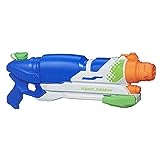 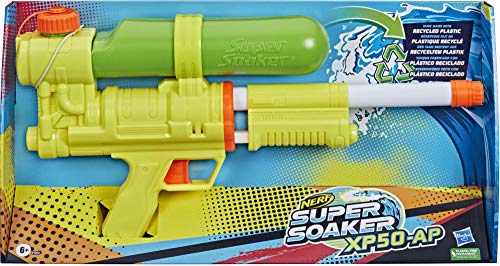 This one is a bit different as it’s much thinner, can only hold 25-ounces of water, and is pressurized, meaning that you’ll have to pump and press down on the trigger to fire your blaster.

It’s a bit more complex and retro-looking than the newer entries on this list, but it can be a must-have for Nerf enthusiasts.

The good news is that it still fires up to 35 feet and is thin enough that’s easy to carry all around the battlefield. 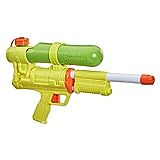 Although today’s water guns are much more exciting than older products, they’re quite affordable, making them perfect for summer fun.

If you have a $50 budget and want to get the best bang for your buck, take a look at our top pick or consider one of the alternatives that we listed instead.

No matter what your needs may be, you’re sure to find a water gun that offers ample capacity and gets everyone drenched!