So far in the Nerf Ultra Series, we’ve covered two excellent motorized blasters. Now, we’re going to move onto a manual blaster that is sure to top your list of best Nerf shotgun-style blasters.

If you’re ready to dive into a new type of shotgun that all older Nerf enthusiasts will want to add to their collection, let’s take a closer look at the Nerf Ultra Three and what it has to offer users.

Here is our official unboxing and review video

As you may have already expected based on the series that this blaster falls in, the Nerf Ultra Three sports a ghost white and light orange design characteristic of the Nerf Ultra line with a golden “ULTRA” located at the front end of the blaster. 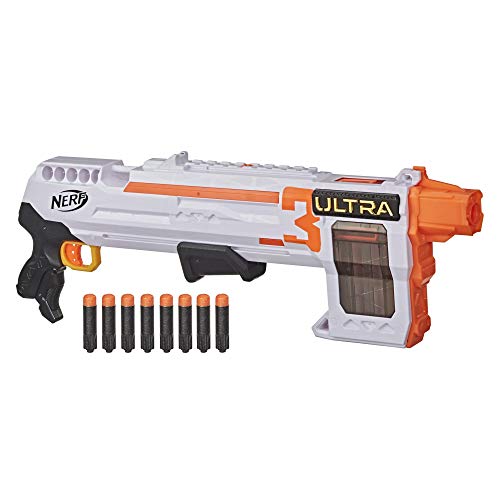 In comparison to the other blasters we’ve covered so far, the Nerf Ultra Three is a much larger gun due to the fact that it’s shaped much more like a shotgun.

That being said, it’s relatively light, making it usable for older children as well as teenagers who are interested in this product.

Overall, the Nerf Ultra Three is an attractive, well-built product that you should absolutely consider gifting to the Nerf enthusiast in your life.

Ammo Capacity: What’s impressive about this long-range blaster is its ammo capacity. The Nerf Ultra Three is capable of holding up to eight darts inside of its internal clip system. 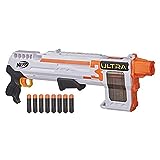 All of the Nerf Ultra darts are the same, offering a lightweight foam, innovative flight tip, and aerofin technology to make the darts fly farther and with greater ease.

Because of this increased ammo capacity, the Nerf Ultra Three works excellently as both a primary weapon or as a side blaster for those who want a bit more stopping power rather than a handgun.

As the title of this review suggests, the Ultra Three utilizes pump-action firing to deliver its darts. 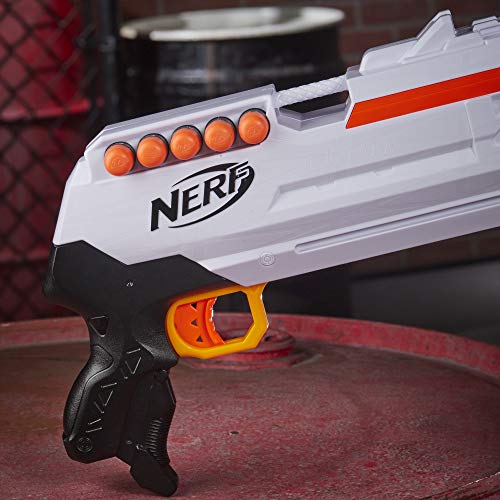 Characteristic of the series, the Ultra Three is able to fire darts up to 120 feet. What you’ll immediately notice about the Nerf Ultra Three is the sheer power that accompanies the darts.

Once you prime and fire this blaster, you’ll know that you have a winner on your hands. A ton of some Nerf dart blasting fun!

There are a couple of minor features on this blaster that lend themselves to the overall functionality of this weapon. These include:

Notch for Straps: This blaster can be understandably large for younger players. If they have difficulty carrying it around the Nerf battlefield, you can attach a strap to the notch at the top of the weapon to make using the blaster easier for them. 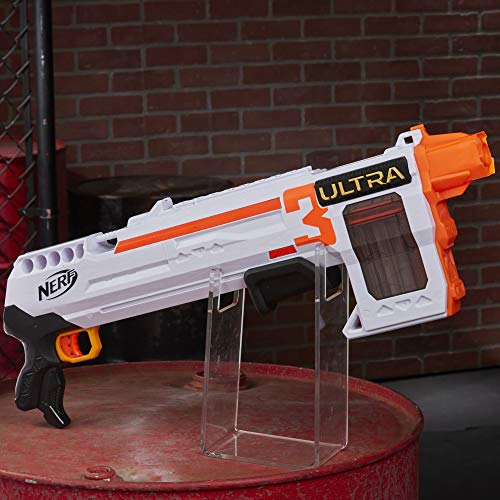 Tactical Rail at Top for Scopes: If you prefer to have scopes to make aiming the blaster easier, the Nerf Ultra Three comes with a tactical rail at the top of the blaster so that you can attach your own scopes and improve the overall accuracy of this weapon.

Additional Ammo Storage on Body of Blaster: Nothing is worse than running out of ammo mid-battle, especially when you have a weapon that requires you to carry around loose ammo. Fortunately, the Nerf Ultra Three comes with five notches at the back of the blaster where you can store additional Nerf darts for emergency situations.

With these features on your side, you’ll find the Nerf Ultra Three an even better weapon to have during a Nerf battle!

Outstanding Power and Range: The most striking aspect of this blaster is the sheer force with which it fires its darts. With this power, accuracy, and range on your side, the Nerf Ultra Three is a blaster equipped for battle in any environment.

Internal Clip System: Loading darts into an open-faced barrel system can cause numerous complications during battle. Fortunately, the Nerf Ultra Three comes with an internal clip system that allows you to reload your weapon more effectively. Simply pull back the priming mechanism to reveal the inner chamber, load your darts into the open clip, prime your blaster, and fire at will!

Extra Features for Greater Usability: Larger weapons can be a bit more difficult for some Nerf users to handle, even though this is a lightweight blaster. The good news is that you’ll find aiming and carrying your weapon are much easier with the notch at the top of the weapon for a strap and the tactical rail to attach a scope that helps with aiming the blaster. Additionally, the extra slots for Nerf darts help users stay protected when they eventually run out of ammo. Overall, this blaster is tailored to any Nerf enthusiast.

No Need for Batteries: Motorized blasters come with plenty of benefits, but one of the major disadvantages is that it makes the blaster impossible to use should you run out of juice mid-battle. With this manual weapon, you never have to worry about losing power or the ability to use your Nerf Ultra Three. Simply prime and blast!

You’ll be surprised to learn that we have no issues with this blaster. The Nerf Ultra Three is powerful, effective, and fun to use, making it a great entry in this series that anyone will want to consider adding to their collection.

If you’re looking for an unproblematic blaster in the Nerf Ultra series to start you off on your journey into this line of blasters, you’ll truly enjoy the experience that the Nerf Ultra Three offers. 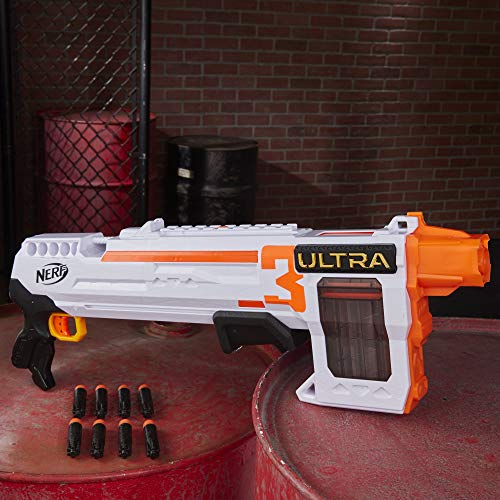 Armed with plenty of firepower (in regards to power, range, and accuracy), additional features that help you make the most out of your weapon, and an internal clip system that simplifies the firing process, there’s truly nothing that is a disadvantage of this blaster.

If you want a Nerf shotgun that stands out from other options in every other Nerf Ultra blasters, the Nerf Ultra Three is the blaster for you.