When Nerf dart guns may be too much for indoor battles (or if you have younger kids you’re buying gifts for this holiday season). the best alternative to turn to is Nerf disc guns.

Not to be compared to some disc blasters that you may find in the dollar store, Nerf disc guns offer a superior blasting experience that offers the tamer battle action you’re looking for without stripping away any of the fun.

But when it comes to choosing one, what is the best Nerf disc gun to buy?

Much like it is with all of the other Nerf blasters, it rarely boils down to just one choice. To help you along your own Nerf journey, here are the five best Nerf disc guns to consider buying now! 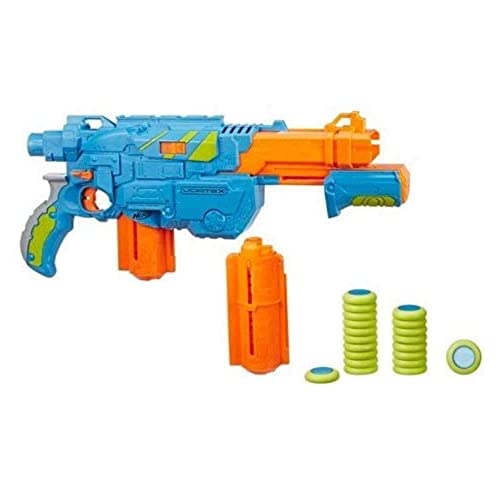 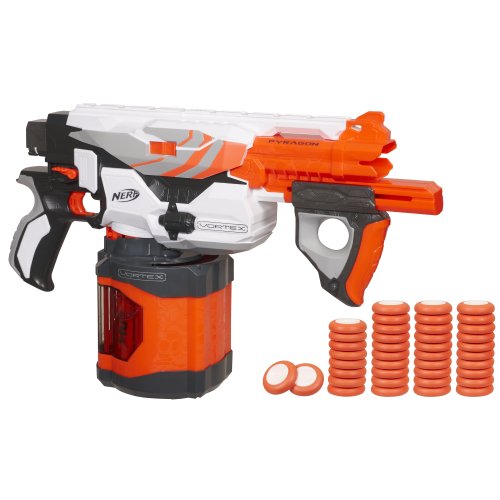 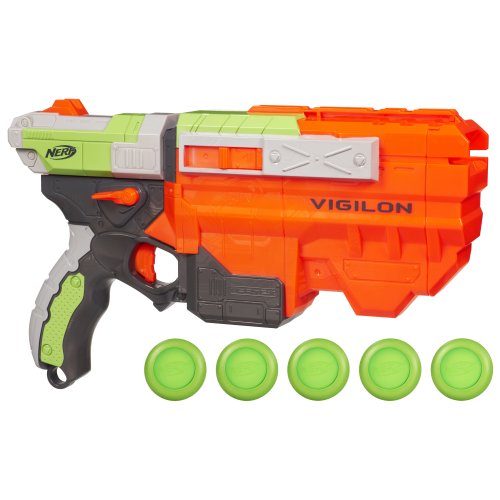 Here are the five I will review in this article:

The Best Nerf Vortex Guns that you can find listed 1-5:

Looking for the best disc gun that would be perfect for a user of any age? If so, you’re going to want to purchase the Nerf Vortex Vigilon. 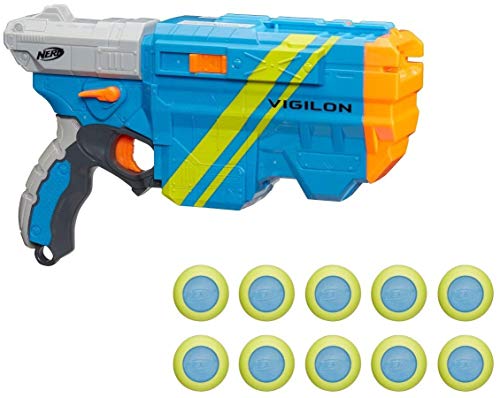 Lightweight and colorful (offering multiple different styles due to reskinning throughout the series, something that you’ll see across most Nerf Vortex blasters), the Vigilon offers a five-disc capacity that is accessible through the built-in magazine on the side of the blaster.

What we like about the Nerf Vortex Vigilon is that it was built for convenience. With an easy cocking mechanism at the top of the blaster, magazine releases on both side of the blaster’s body, and a disc release in case you end up dealing with a disc jam at some point during the firing process, this is a blaster that is truly easy for any user to manage.

You’ll also find that it offers plenty of power for indoor battles, with its rigid discs offering a 50-feet of fun.

Whether you choose the original blaster or the reskin, any Nerf user is going to enjoy trying out the great Vigilon on their opponents!

The good news is that, while the Vigilon is friendly for all users, Nerf didn’t forget to develop blasters that may offer a little bit more so that their disc guns could go the extra mile.

Here is our full review of the Vortex Praxis 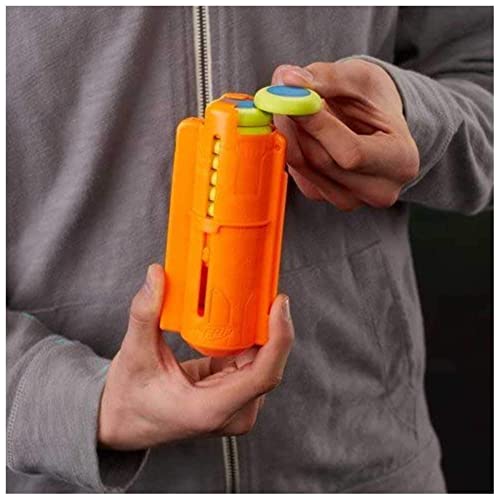 For more intense Nerf battles, consider turning to the Nerf Vortex Praxis. The Praxis offers more firepower than the Vigilon, with a 10-dart external drum that can easily be ejected and inserted into the blaster for more firepower, something that will be especially important if your child is up against bigger and better disc blasters.

Unlike the Vigilon, the Praxis has also decided to include the priming mechanism at the front of the weapon in the form of pump-action (no slam fire on the Praxis). Besides these changes, it features many of the same design elements, including the disc jam ejector and the dual-sided magazine release. 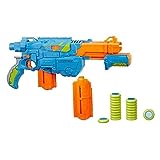 However, for users who are more involved, the Praxis features a tactical rail at the top of the blaster for additional scopes as well as an attachment point for a shoulder stock. You’ll find that this blaster shoots approximately 50 feet as well!

If you want to buy a good blaster that uses discs but offers a more traditional Nerf blaster feel, the Praxis is an excellent choice.

Nerf is always entertaining us by improving upon previous models to bring us even greater weaponry. The Nerf Vortex Pyragon blaster is one that truly embodies this reality and will have you saying, “oh, this is the best Nerf disc gun”.

Here is our full review of the Vortex Pyragon.

If you found that the Praxis didn’t quite meet your needs, you’re going to love the Pyragon. Everything is relatively similar on the Pyragon when compared to the Praxis. 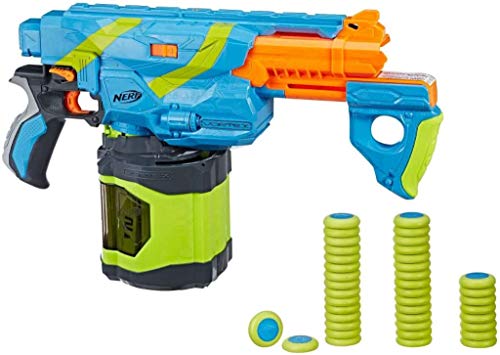 You have your dual-sided magazine releases, your disc jam ejector button, your pump-action priming mechanism (although the Pyragon does feature slam fire, making it more versatile during battle), and a tactical rail (which is bigger than the Praxis’s) as well as an empty section where you could attach the shoulder stock.

You may be asking at this point, “what about the ammo capacity”? This is where the Pyragon stands out. Rather than offering space for five or ten discs, the Pyragon offers a massive drum that packs a whopping 40 discs at a time.

This does making loading a little more complicated, which is something to keep in mind for younger players, but is otherwise something that they’ll become accustomed to over time.

The Pyragon does lose a little power as a result of it’s design (shooting only 40 feet), but with slam-fire capabilities, it really is a matter of ammo over power.

Should you want a big blaster that can take on any opponent, the Nerf Vortex Pyragon is the way to go!

The Nerf Vortex Diatron is different than most other weapons due to its design, which offers something fresh and exciting to users who want their weapons to stand out.

As you may have guessed by the name, the Nerf Vortex Diatron is a disc blaster that is capable of shooting out two discs at a time.

While this isn’t necessarily the most exciting feature you would want on your dart blaster, this can be helpful due to the fact that discs can be harder to dodge and are able to ricochet off of surfaces like walls, making the likelihood of hitting an opponent that much greater.

The Diatron returns to the internal loading system, offering space for 10 discs. Simply open the internal magazine by pushing one of the magazine releases on either side of the blaster, load your discs into the chamber, and prepare to fire.

The priming mechanism on this blaster is far different than any other blaster. It’s located on the side and must be pushed forward then back in order to prepare the blaster to fire the discs.

In regards to the other features, the Diatron does come with a tactical rail and an ejection button on the side of the blaster. Once fired, you can expect a range of about 50 feet.

Overall, if you want something unique when you’re looking for the best Nerf disc gun, you’ll find the Diatron refreshing.

Finally, we have the Nerf Vortex Revonix 360, a disc blaster that is designed to offer a superior experience in comparison to the other disc blasters in the Vortex lineup. 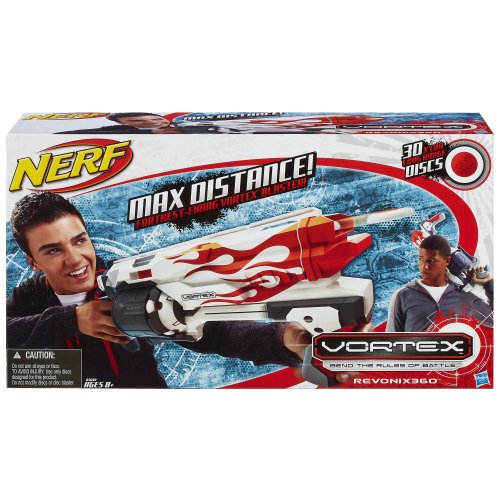 The first thing that users will notice upon seeing the Revonix is its size. The Revonix is a much larger blaster than most other disc blasters, requiring two hands for operation (although this is fairly easy to achieve as the blaster comes with multiple handles as well as sling openings for any slings you purchase).

With a massive tactical rail for additional parts, a stock attachment point, and a disc ejector, the Revonix follows the traditional formula fairly well.

Another surprise you’ll find on the Revonix, however, is that it uses a built-in drum rather than a magazine attachment. The drum contains five internal sections that can hold up to six discs, allowing for 30 discs total. 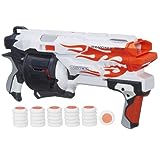 To load your drum, simply load the number of discs into the first section, rotate the drum, and continue loading until the blaster is full. The Revonix uses a pump-action priming mechanism and is said to fire discs up to 65-feet, which is a major upgrade for users who need power.

If you want ammo and power, go for the Nerf Vortex Revonix 360!

There is no best Nerf disc gun, but there are many great options in the Nerf Vortex series that will really add variation to the traditional Nerf dart experience.

If someone has been asking for a Nerf Vortex blaster but you don’t know where to start, use the five excellent recommendations above to help you narrow down your options and choose the right Nerf gun for them!

I recommend picking up a set of extra discs to add to your new blaster. 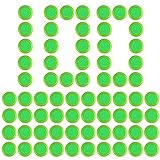 Accuracy of Nerf Blaster & Darts – How They Differ & Why 5 Best Nerf Guns to Modify That Are Worth Buying

The 15 Most Popular Toys in the World Do Nerf Guns Use Batteries? What’s Better With or Without? 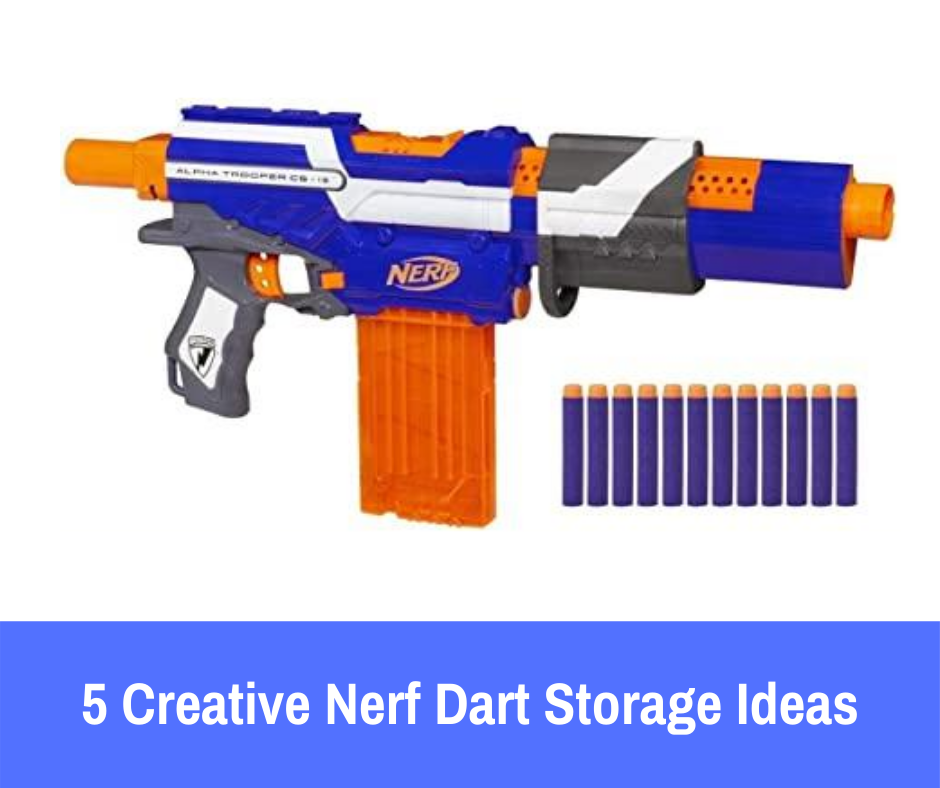 Is it Safe to Shoot a Cat with a Nerf Gun?